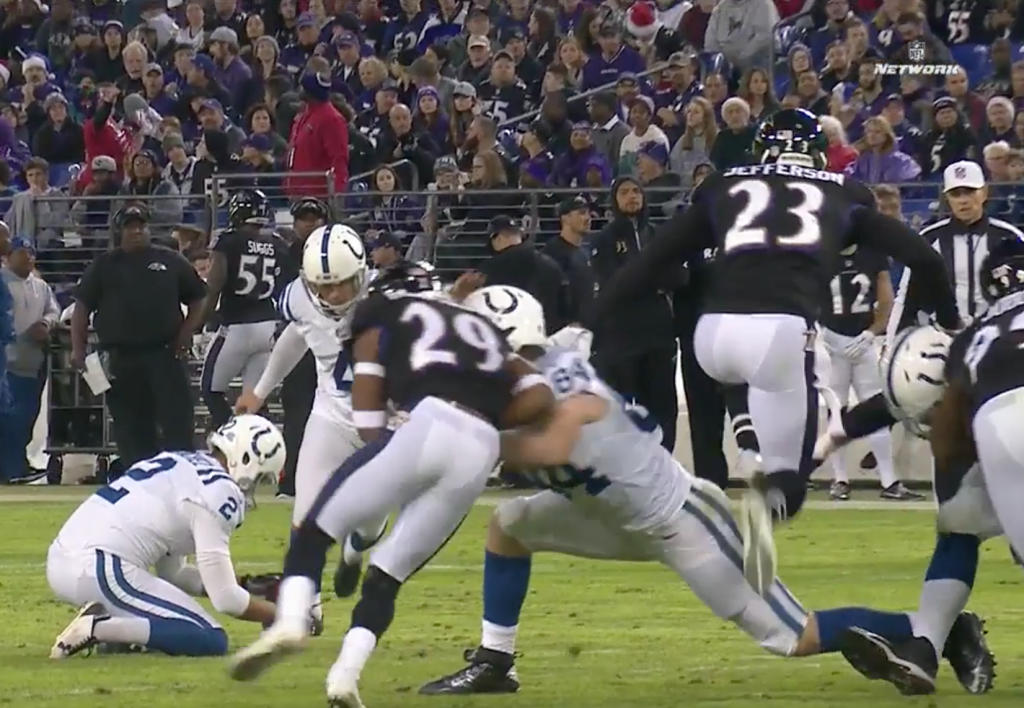 It didn’t play out quite the way the oddsmakers thought it would and the game was far too close for comfort. But in the end, the Ravens got the “W”, holding off the Colts by the score of 23-16.

The ebbs and flows, highs and lows of a season can be maddening. Just when you think a team is on a roll, they deliver a flat game and struggle to ward off a team that has nothing to play for but pride.

Well, we’ve all seen this movie before. Back in 2012 the Ravens were (9-2) heading into Week 13 when they hosted Charlie Batch and the Pittsburgh Steelers. The visitors won that game and it would mark the beginning of a 3-game skid during which the Ravens lost to the Redskins in OT and they were pasted in Week 15 by the Broncos 34-17 – and it wasn’t even that close.

But in Week 16 the Ravens got their groove back and didn’t lose a meaningful game the rest of the way, including road playoff wins against the favored Broncos (-9) and Patriots (-7.5).

With the win over the Colts on Saturday, the Ravens improved their potential post season positioning and are now the 5th-seed with one game to play. If the Vegas line in any indication (Ravens -10) John Harbaugh & Co. will be headed to Kansas City. And really, given where the Ravens sat at the bye, that’s all we can hope for from this flawed team.

For the second consecutive game Buck Allen ran well between the tackles picking up 37 yards on 8 carries and converting a key third down in the second quarter as a receiver. Joe Flacco’s pass was low and late but Allen secured the rain-slicked ball and added a few yards of YAC to keep the drive alive…Willie Henry had a sack, a QB hurry, 4 tackles, 1 TFL and he did an excellent job diagnosing a well-designed screen on the Colts final drive, dropping Frank Gore for a gain of just 4 at the Ravens 23 when it could have been much more…Za’Darius Smith had 4 tackles, a sack and a hurry while Matt Judon again demonstrated his versatility as a cover linebacker and pass rusher. It’s hard not to think of Adalius Thomas when watching Judon play…C.J. Mosley had 6 tackles, 2 for losses and he showed athleticism when dropping back in coverage and deflecting a Jacoby Brissett pass intended for Jack Doyle…Justin Tucker was perfect during an evening that challenged kickers given the slick ball, rains and wind. He was 3-for-3 connecting from 30, 39 and 36…Tony Jefferson made a nice move to slip past two Colts and block Adam Vinatieri’s 38-yard field goal attempt.

Ronnie Stanley had an inconsistent night and seemed sluggish at times when trying to fend off Jabaal Sheard. Stanley was flagged for a false start and immediately following that play, his protection breakdown paved the way to a 17-yard sack. The two negative plays took the Ravens from a first-and-10 at the Colts 22 to a 2nd-and-32 at the Colts 44…The Ravens averaged just 3.2 YPC and they had 6 rushes that produced 0 or negative yards…The Ravens red zone offense continues to be a problem. Their first 4 plays inside the 10 went for a total net of -5 yards. Many will blame offensive coordinator Marty Mornhinweg – and he certainly should accept some of the blame. But sometimes it isn’t all on Marty. Quarterback Joe Flacco completely blew an easy opportunity of a TD in the red zone on a very well-designed play. 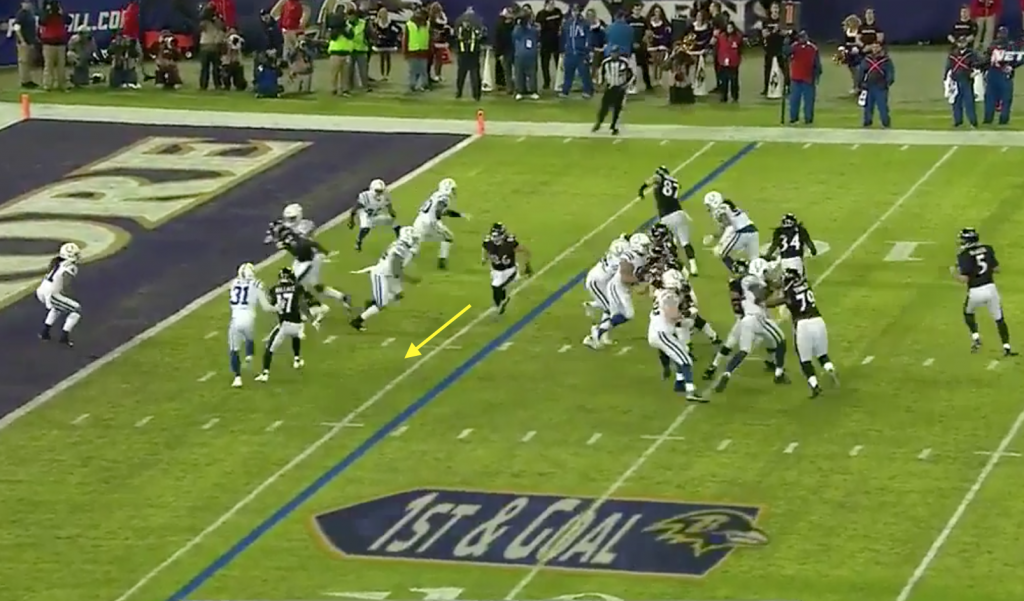 The Ravens get the exact look they hoped for from the Colts. The flow of the defense is towards Flacco’s right while Boyle gets a clean release to a wide open area of the field. The play has success written all over it. 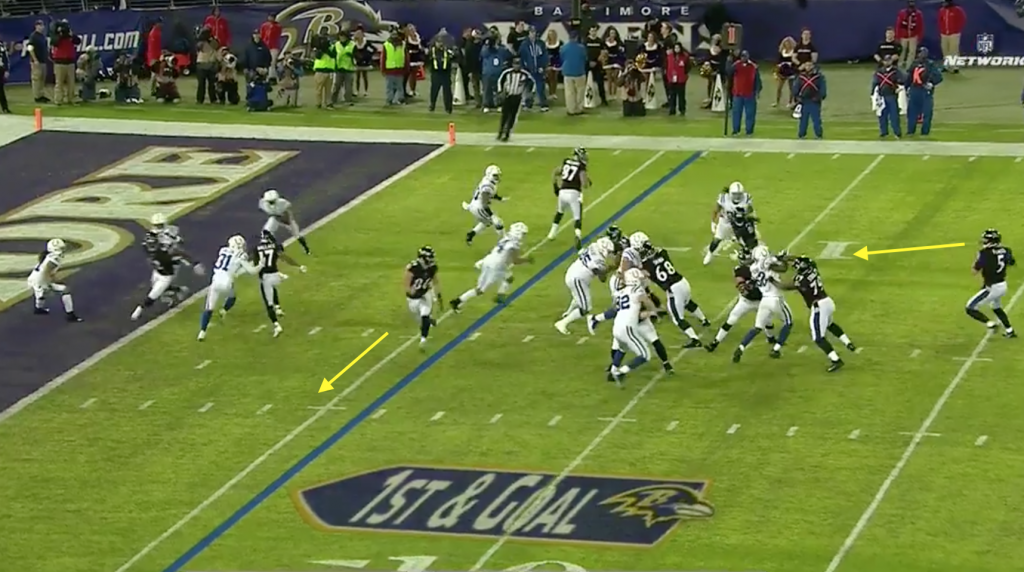 Flacco has an extremely clean pocket with plenty of space to set and throw. 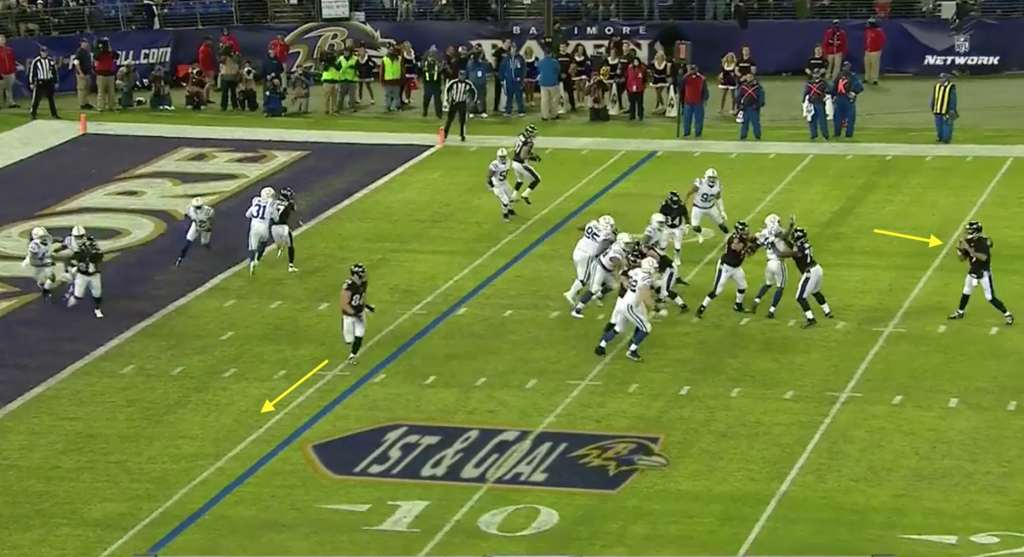 Flacco inexplicably reloads as he stares down his wide open receiver. 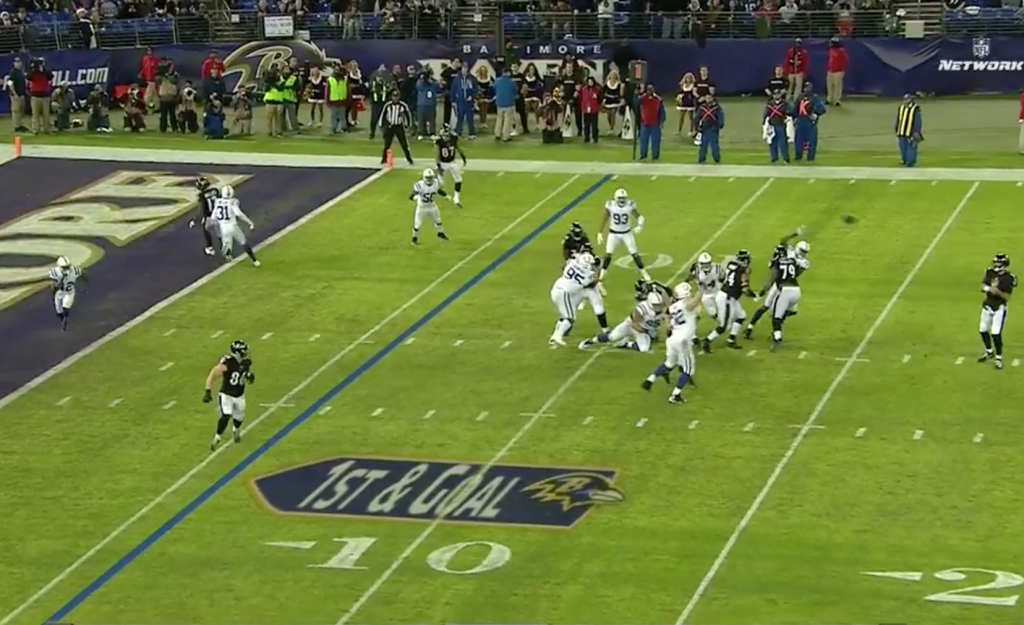 Finally, Flacco uncorks the pass to the still wide open Boyle. This should be an easy touchdown. Except the elementary pass is completely off the mark. 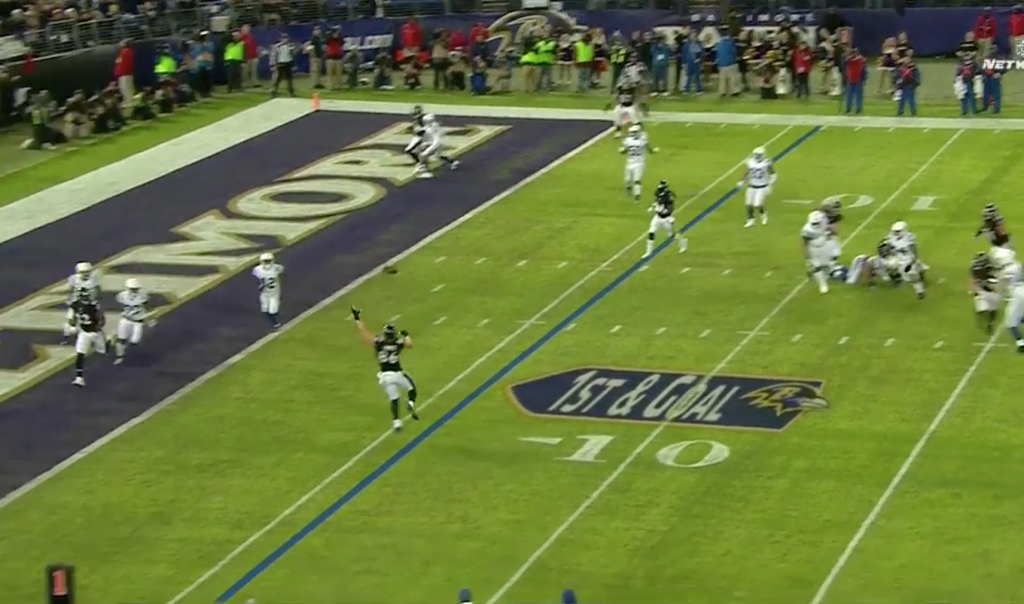 The Ravens generated very little pressure and failed to unsettle Brissett with deceptive blitz scheming. The Colts were the NFL’s 32nd-ranked offensive line when protecting the passer according to Football Outsiders and they had yielded 53 sacks entering the game. The Ravens managed just 2 sacks on 35 Brissett drop backs and too often the Colts QB had enough time to order a pizza, read through progressions and hit receivers on slow developing drag routes, a few going to T.Y. Hilton. Hilton had just 14 catches for 150 yards in his previous 5 games. He racked up 6 catches for 100 yards v. the Ravens…Eric Weddle whiffed on a couple of tackling attempts and he missed two opportunities for interceptions…Lardarius Webb does nothing to warrant any playing time. The Ravens would be better off giving his snaps to Jaylen Hill…Patrick Onwuasor continues to get lost in traffic. Kamalei Correa’s appearance as a defender is likely an indication that the coaching staff isn’t exactly happy with Onwuasor’s play as of late…Terrell Suggs jumped offsides twice and Z. Smith joined the twitchy party with an encroachment of his own.

Starting with Joe Flacco, the Ravens execution of screen passes is inconsistent at best (they did complete a nicely designed screen in the red zone to Ben Watson that looked very Brady-esque), but the timing and failure to properly sell the screen on two other occasions (attempts aimed at Nick Boyle and Danny Woodhead) nearly led to two potentially game-changing interceptions…Later when facing a 3rd-and-5 from their own 46 with 2:49 left, Boyle committed a false start which stopped the clock and put the Ravens in a more challenging 3rd-and-10. Mornhinweg felt compelled to throw it and the pass to Mike Wallace was incomplete. The sloppy game management saved the Colts, who had no timeouts, about a minute of game clock. And after all of this inept game management, Sam Koch had his punt blocked giving the Colts a great opportunity to tie the score at 23 or even take a one-point lead with a two-point conversion…Overall the league’s best special teams unit, save for Tucker, had a bad night. Michael Campanaro nearly coughed it up on a botched attempt at a punt return and Koch’s shanked punt (28 yards) at the end of the first half handed the Colts a chance to put 3 points on the board before the break. Last week’s Special Teams Player of the Week netted just 21 yards on his two punts. 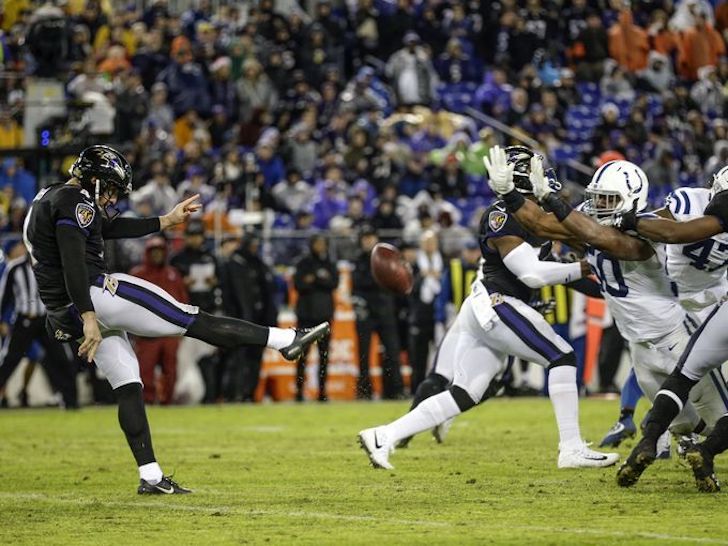 Many have already criticized Harbaugh for using timeouts at the end of the fourth quarter when the Colts tried to even the score. Critics have suggested that using those timeouts demonstrated a lack of confidence in his defense to stop Brissett & Co. (Can you blame him?) But the use of timeouts was the right play. If the Colts did score, the time saved could have given the Ravens a chance to win the game with a Tucker field goal. Besides, when the turnover on downs did take place, the Ravens easily killed the clock given that the Colts had no timeouts.

That said, there’s absolutely no excuse for Harbaugh’s brain fart when declining a holding call against the Colts at the 8:16 mark of the fourth quarter, leading 23-13. The Colts committed a holding penalty on a third-and-one play from their own 34. Harbaugh declined it and the Colts opted to go for it on 4th-and-1. They converted and it led the way to an Adam Vinatieri field goal to make it a one-score game at 23-16.

On a night when the elements challenged the passing game, Joe Flacco was 29 of 38 for 237 yards and 2 scores for a passer rating of 109.2, his best so far, this season. He appears to be seeing the field better and keeping his head downfield in search of big play opportunities (the highlighted play above, notwithstanding). Since the Week 10 bye, Joe’s passer rating is 93.5. He will need to keep the momentum going when the Ravens face the Bengals on Sunday, a team against which Flacco has a (9-9) record with a career passer rating of 72.5. The Bengals have picked off Joe 22 times during those 18 games. 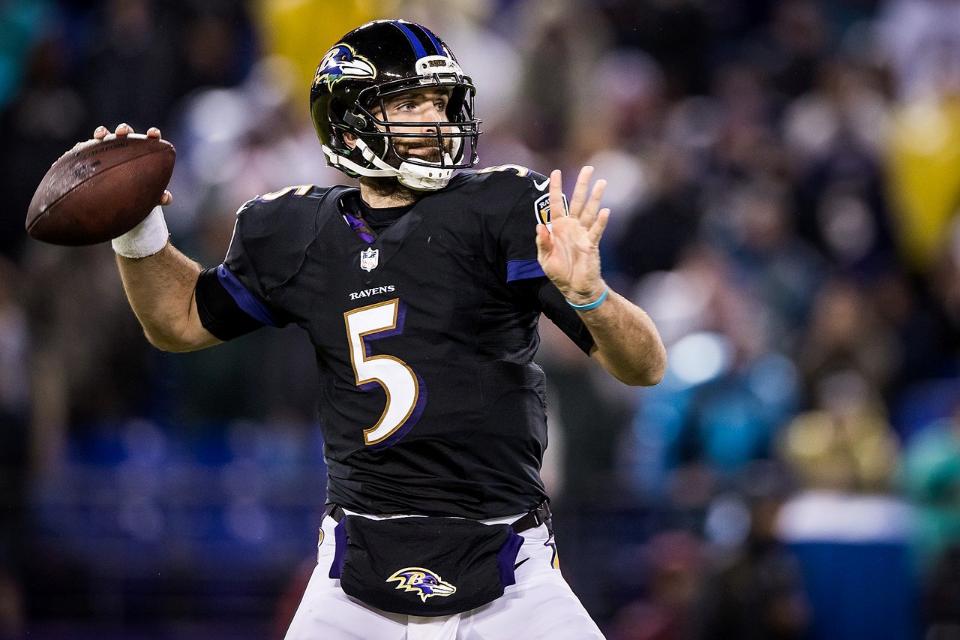