Marty Mornhinweg has his fair share of critics in Baltimore. His game plans have been labeled “vanilla”, “bland” and “unimaginative”, to name a few. And despite averaging 29.8 points since the Week 10 Bye there are some who are still calling for his head.

Now Mornhinweg does deserve some share of the blame for the offensive inadequacies, particularly with his red zone play calling. But the Ravens inability to score touchdowns v. field goals when deep in an opponent’s territory isn’t all on Marty. Sometimes there’s just bad execution on the part of the players.

Let’s consider some of the red zone opportunities the Ravens had v. the Colts.

At the 8:08 mark of the first quarter the Ravens had a first-and-goal from the Colts 7-yard line. Mornhinweg called for an Alex Collins run off right tackle.

Chris Moore motions from right to left against a defense that is clearly stacking the box. The Ravens intend to run but the play already looks dead on arrival.

As Moore makes his way to the left slot he draws the attention of the defensive back. The motion helps to pull one player out of the box while the safety is peeking into the backfield and mindful of the receivers flanked to the defensive right.

Checking out of the play seems like the right idea. Wallace on a slant in and Moore on a corner route to the back left might be an option in the play design but Joe Flacco opts to carry out the run, perhaps influenced in part by the down and distance and Collins ability to gain yardage after contact. But the play fails miserably and Collins is dropped for a loss of one.

Now facing a 2nd-and-Goal from the 8 the Ravens opt to move the pocket a bit for Joe. He rolls a bit to the right and his primary target seems to be Maxx Williams. Pay attention to Mike Wallace on a skinny post.

Williams is covered and Flacco turns his head towards Wallace. It’s a throw that Joe has made many times before – think Anquan Boldin in the 2012 AFCC Game and Super Bowl 47.

Eventually Joe goes with his check down to Collins and the play loses 4 yards. Two plays, -5 yards and now it’s 3rd-and-goal from the 12-yard line.

On 3rd-and-goal from the 12, the Ravens empty their backfield while the Colts opt to rush just three. Perhaps they’re hoping to entice Flacco into forcing a throw, inviting a mistake. Instead Joe plays it safe and chucks it out of bounds to preserve the opportunity for an easy Justin Tucker field goal.

On the Ravens second possession of the game they faced a 1st-and-goal from the Colts 6-yard line at the 12:59 mark of the second quarter. Mornhinweg dialed up a perfectly designed play that called for tight end Nick Boyle to work his way through the wash from his alignment on the right, to the great wide open outside the left hash mark.

Flacco has an extremely clean pocket with plenty of space to set and throw.

Flacco inexplicably reloads as he stares down his wide-open receiver.

Finally, Flacco uncorks the pass to the still uncovered Boyle. This should be an easy touchdown. Except the elementary pass is completely off the mark.

A scoring opportunity has been lost.

On second down Mornhinweg dials up another failed Alex Collins red zone run to the right that goes absolutely nowhere, setting up a 3rd-and-goal from the six. This time Flacco executes the play to perfection.

Flacco stares down a couple of options to his left in order to get the safety to move away from the area he hopes to attack. The Colts only rush 3 which allows for the double-teamed attention directed towards Michael Campanaro from the Indy secondary.

The linebacker releases Campanaro to the safety and holds firm in his zone while Flacco continues to bait the Colts’ DBs with his head movements. Camp plants his foot and is about to cross the face of the safety whose technique on this play proves to be a fatal flaw.

Flacco now swings his head towards Campanaro who is now behind the backer and for all intents and purposes has torched the DB who is helpless to defend.

Flacco loads up to uncork a laser shot to Campanaro. An accurate pass and catch is all that stands in the way of the game’s first touchdown.

At the 10:48 mark of the third quarter the Ravens faced a 2nd-and-1 from the Colts 15. After another red zone run that went for no gain, this time to Buck Allen, the Ravens had another shot to gain a red zone first down. Mornhinweg scanned his play chart and came up with an interesting call that should have worked easily, particularly against a defensive look that screamed success for the Ravens.

The Ravens flanked Ronnie Stanley, Austin Howard and Ben Watson wide right with Nick Boyle immediately behind them. Flacco got the look he wanted with just two defenders to take on three blockers to ensure the play’s success. A one-yard gain seemed all but certain.

But the play unravels due to two fatal flaws. The first of which is a complete whiff by Watson on the Colts DB.

The second fatal flaw belongs to Flacco. His pass is high, forcing Boyle to leap, thus slowing down any chance to advance or break a tackle to pick up the needed one yard. The result is a loss of three, forcing Justin Tucker on to the field to extend the Ravens lead to 16-7.

Leading 16-13 at the 10:12 mark of the fourth quarter, the Ravens successfully ran Buck Allen twice from the 12-yard line setting up and 3rd-and-2 from the four. 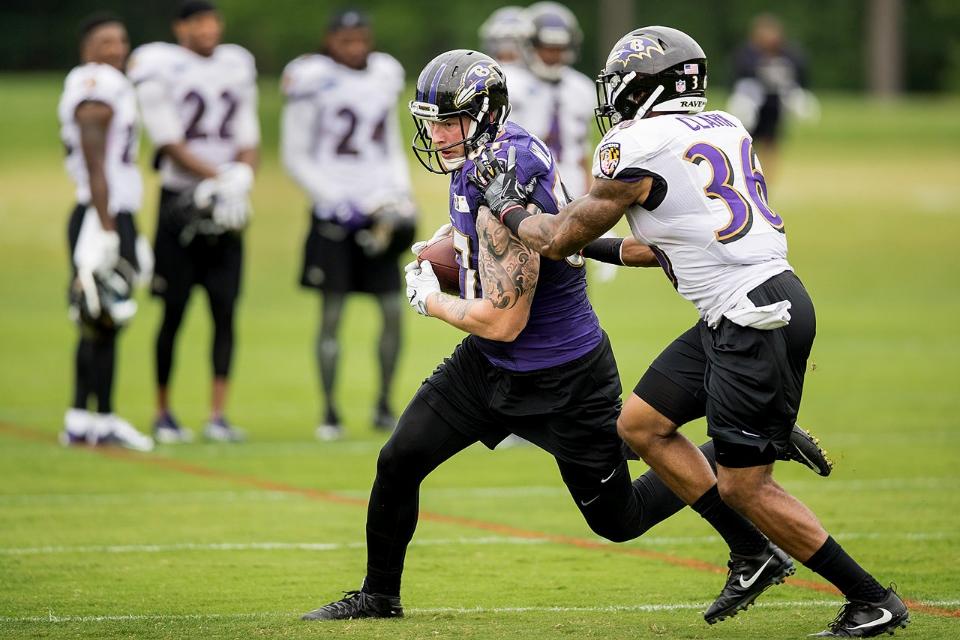 The Ravens get the look and the man coverage they hoped for. Off play action which sucks up the linebacker assigned to Allen, the Ravens run a crosser at the top of the picture to open some real estate for Maxx Williams leaking out of the backfield.

The only hope the Colts have to thwart this red zone effort, is for the safety to get to the flat before Williams does.

But the Colts DB takes a bad angle which increases the chance for the play’s success.

Mornhinweg has been guilty of a few iffy calls in the red zone. And clearly, if the Ravens want to advance in the post season, they’ll need to clean that up and exchange Justin Tucker FGs for TDs.

But as evidenced above, the players need to execute better.

And such failures may cost the Ravens dearly in postseason play.