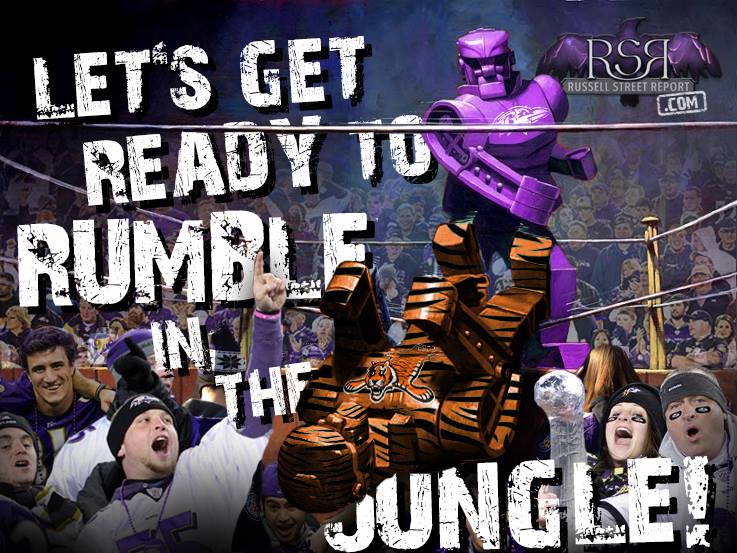 The seeds of the Ravens aerial attack against the Bengals were dropped into the dirt of a rainy field against the Colts last Saturday night. By necessity, quarterback Joe Flacco and offensive coordinator Marty Mornhinweg turned to more of an intermediate passing game and targeted spaces in front of and behind the Indianapolis backers, piercing the Colts’ zone scheme.

The Bengals are a predominant zone-based defense as well. They run a combination of Cover 2 and Cover 4 looks to keep the big plays down to a minimum and keep everything in front of them. Meanwhile, the outside duo of William Jackson and Dre Kirkpatrick are coming off a game in which they held Marvin Jones Jr. an Golden Tate to just six catches for 64 yards. Jackson in particular is playing at a shutdown level (according to Pro Football Focus, he’s yielded the lowest catch percentage of all CBs this season).

Flacco can take his chances against Kirkpatrick on deep shots to loosen up the coverage, but this game is going to hinge on the inside pass-catchers’ ability to win on sit down routes and seam patterns to keep the chains moving. The Bengals will force Flacco to be precise and move the offense systematically. He’ll need to use his eyes and pump fakes to move drop defenders out of their zone positions to clear passing lanes for his receivers. 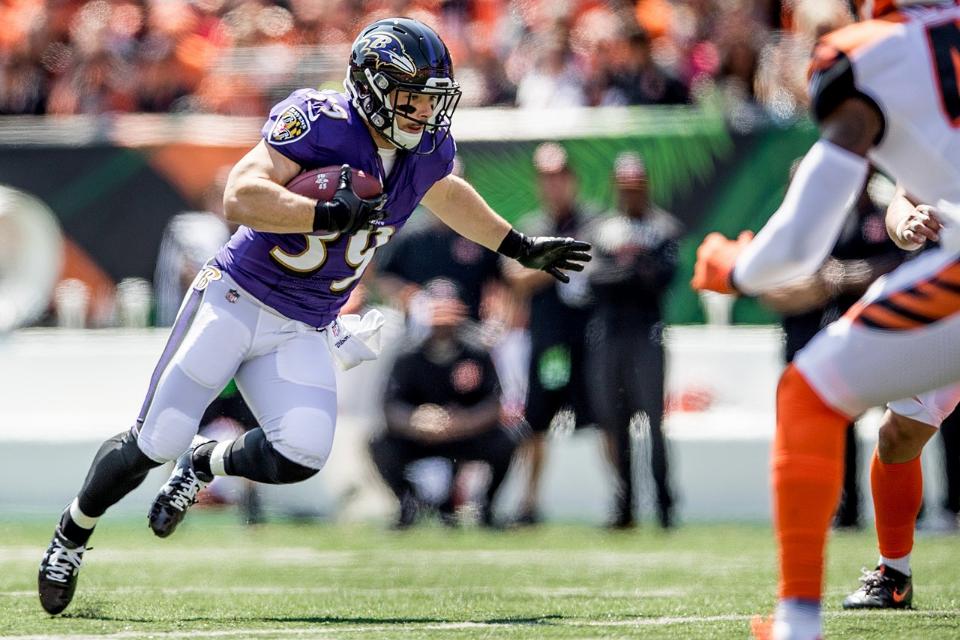 Michael Campanaro and Danny Woodhead combined for seven catches and 54 yards, which may not seem like much on the surface, but they were valuable safety valves for Flacco underneath. In fact, Campanaro should have been targeted more often. While Woodhead had the benefit of working from some pre-snap motion to avoid press coverage, Campanaro wasn’t involved as a move guy in the offense.

Both players present matchup challenges for a Cincinnati defense that has struggled to contain underneath pass-catchers this season. Backs have done the most damage against the Bengals, but Campanaro is someone who can run routes coming out of the backfield. Getting him involved as a move guy will present more free release opportunities for him.

We saw how Woodhead created all kinds of problems for the Cincy backers in the first game of the season (3 catches, 33 yards on the opening drive). His ability to line up in a variety of spots will be pivotal for the offense on Sunday.

For Flacco, the true test will be his ability to decipher Cincinnati’s front and coverages between pre-snap and post-snap phases. The Bengals ultimately play a lot of zone coverage, but they disguise those coverages well, using their safeties to give Cover 1 and even Cover 0 looks at times, only to bail out after the snap to drop into their deep coverage posts.

The Bengals are notorious for showing blitz looks only to bail out after the snap. This includes plenty of double-A bluff/blitz pre-snap shows. A lot of their bluff approaches are geared to get the offensive line out of position, freeing up gaps and angles for free rushers and the front-line defenders on stunts and twists.

This is going to be a challenging chess match for Flacco. He’ll need to vary the snap count to keep the Bengals off balance in their pre-snap shifts, and once the ball is snapped, he’ll need to methodically move through his progressions to avoid being fooled by the pre-snap coverage disguise. 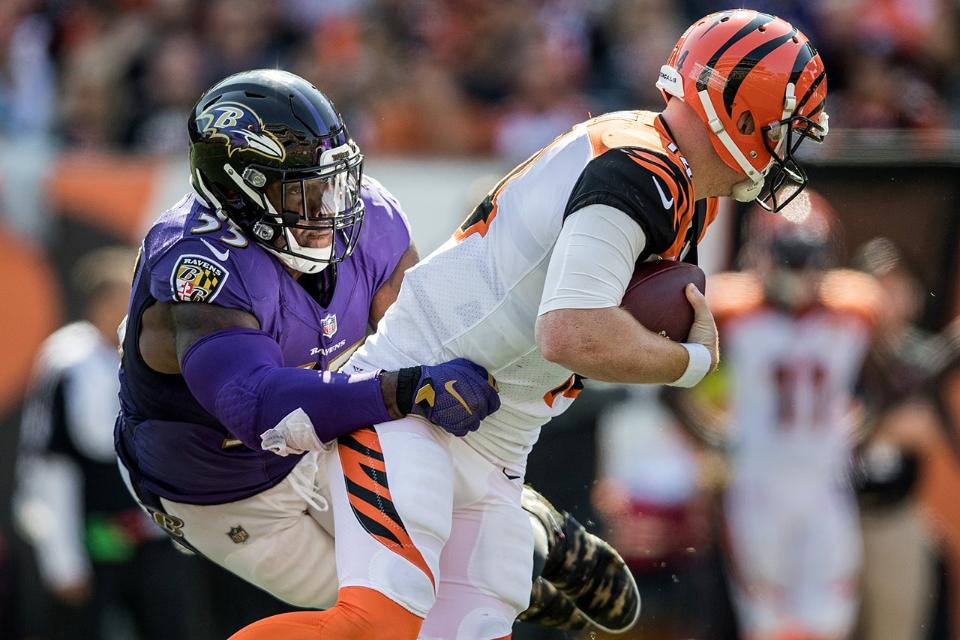 Offensively, the Bengals are a completely different group than the unit Dean Pees faced in Week 1 of the season. They were more conservative with former offensive coordinator Ken Zampese, but under Bill Lazor, the Bengals are back to being a deep-strike passing game that attacks downfield. With quarterback Andy Dalton, Lazor has opened up more opportunities for the Red Rifle to get the ball out quick against heavy pre-snap blitz looks – something we didn’t see him do against the Ravens earlier in the year.

In the past, the Ravens have been tormented by Dalton’s quick-strike passes. Part of that success stems from Dalton’s ability to adeptly decipher the Ravens’ pre-snap blitz looks. The other factor is that Dalton simply gets rid of the ball on time. When his back foot hits, the ball is out of his hands, even if that means he’s throwing the ball without the laces.

Defensive coordinator Dean Pees needs to jam and press the Cincinnati receivers to disrupt Dalton’s timing and force him to double clutch. The DBs also need to be aware of rubs and read-pass options (RPOs) that’ll be used to gobble up any cushion coverage. Corners Brandon Carr and Marlon Humphrey need to drive quickly on these outside passes.

Lastly, the entire defense needs to be prepared for Dalton to speed up the tempo on offense. In their last game, the defense was caught on their heels when the Bengals went with the quick count.

Since Dalton has had so much success in the past pinpointing which Baltimore rushers were coming and which rushers were bluffing, Pees will need to rely less on declared pre-snap blitz looks and instead show static fronts. A static front simply means that front line defenders don’t move until after the ball is snapped. It’s the type of approach you’ll see defensive coordinator Vic Fangio from Chicago run to perfection. In fact, the Bears D stifled Dalton nearly three weeks ago, holding him to just 141 yards passing and forcing one interception.

The reality is that the Ravens won’t be able to change stripes so drastically from a mostly dynamic front that moves around often before the snap to a static front that doesn’t move much at all. But if they mix in some static looks with a few disguised blitzes that shift sharply from pre-snap and post-snap phases, they’ll have a better shot at confusing and ultimately slowing down Dalton.

For Pees, the biggest key is not to show Dalton a pre-snap blitz look and come with the same blitz after the Bengals QB identifies the pressure package. Whatever the defense shows Dalton pre-snap needs to be a decoy to set up the real pressure from another direction.

3. Tackling Bernard in the Open Field

As rookie tailback Joe Mixon’s status remains in doubt, veteran Gio Bernard has picked up the slack in a big way. Bernard has always been a slippery and effective third-down pass catcher for the Bengals. But over the last few weeks, Bernard has produced as a ball-carrier as well, running with terrific power and pad level on inside runs. What makes him so tough to deal with is his ability to stay low, and he can bounce the ball off-tackle if the defense doesn’t maintain its gap integrity.

The Ravens are coming off a poor open-field tackling performance against Frank Gore and Marlon Mack of the Indianapolis Colts. Both backs were able to turn short screens into big gains. A lot of the tackling woes can be attributed to the rainy conditions. But Bernard presents a challenge in the open field. The front seven defenders will need do a better job wrapping up to keep the shifty back from breaking off long gains in space. 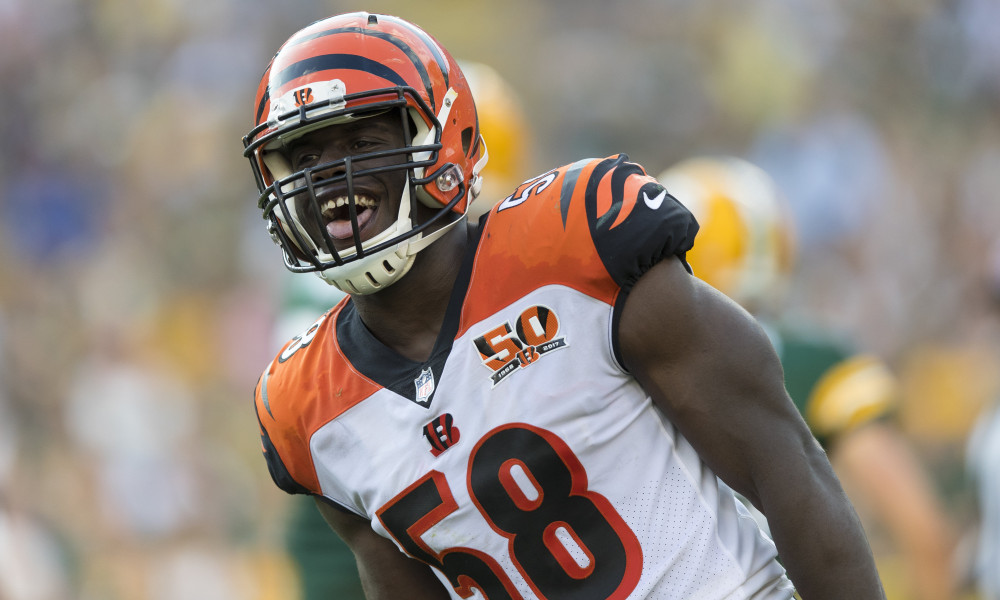 As far as the rookie class is concerned, Carl Lawson’s name hasn’t been brought up nearly as often as it should. Lawson has notched 8.5 sacks for the season and has been a steadying force on an otherwise aging front line. Lawson has a tremendous get-off and uses his hands well to throw opposing left tackles off balance. Stanley has been consistent in pass-blocking situations all season. He has nimble feet and the length to keep opposing rushers at bay.