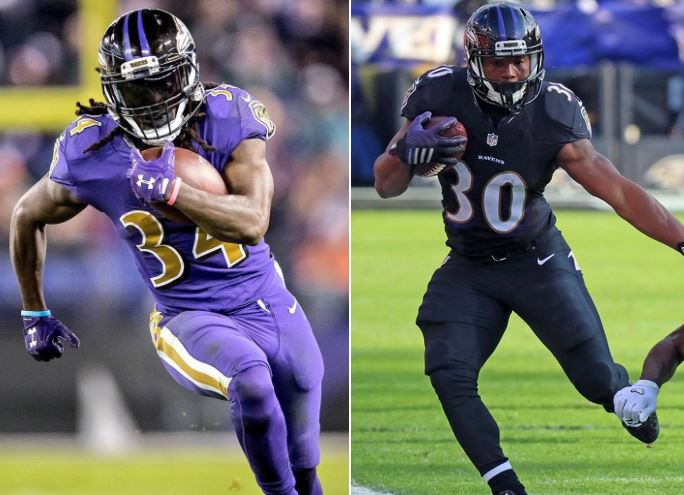 With all the questions surrounding the Ravens offense going into the offseason, the team should at least be happy with the talent they have at running back to work with.

Both Alex Collins and Kenneth Dixon have provided evidence that they have what it takes to be the feature back in Baltimore’s running game.

It’s much easier to remember Collins due to recency bias. I mean how could anyone forget the Irish Dancer? Collins had quite the impressive sophomore year and showed flashes to prove he’s ready to be the RB of this team’s future.

However, Collins’ hot start of 5.7 YPC in his first 12 games didn’t paint the entire picture, as his average dropped to 2.8 YPC in the final three games. Can the team rely on him to be a workhorse back? Which was the “real” Alex?

The same goes for Dixon after his own promising rookie season. Dixon was primed for a feature role in 2017 after showing signs of improvement each game he played in. He ran all over the Steelers in the Week 16 meeting in 2016. John Harbaugh even mentioned that Dixon has the potential to be “one of the top backs in this league.”

But on the topic of recency bias, it’s also much easier to remember his season-ending meniscus injury and four-game suspension for violating the league’s PED policy.

Like they’ve often done, the team could go with a running-back-by-committee approach and give Collins and Dixon an equal (or nearly equal) number of carries. Buck Allen figures to have a sizable role as well. But if the Ravens decide to lean on the running game to carry their offense in 2018, this could be one of the best competitions to watch in training camp.

Let’s take a closer look at each back. 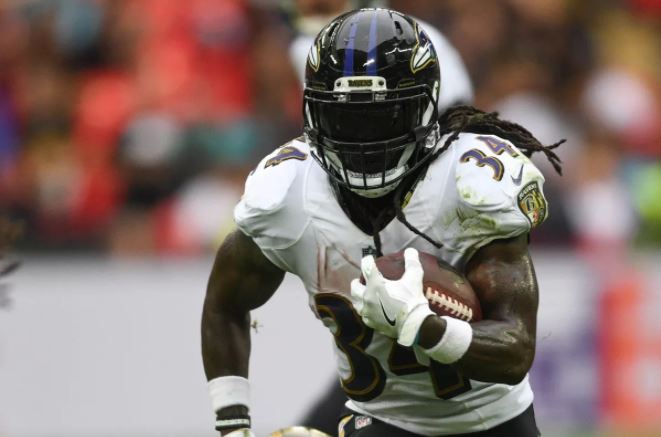 The greatest thing about Collins is that he literally came out of nowhere.

Could you imagine if we were talking about how Jeremy Langford plans to fit in the RB rotation instead? Because that’s who most fans thought would make the roster after Danny Woodhead suffered a hamstring injury in Week 1. Instead, the front office found Collins, and he was one of the most pleasant surprises of the year.

What I like most about Collins is that runs with the intention to kill. He’s very good at finding open space by using his speed to get towards the edge and making a jump cut to find more room to run. Collins is also good at taking advantage of sloppy tackling and finding ways to gain chunk yards after taking contact.

Here are some plays that get me excited about Collins’ future.

This is when we began to realize that Collins was special.

In the above-linked play, Collins tries to run inside left around Ryan Jensen but is met right away by DT Eddie Goldman after Jensen loses control. Collins uses his quick feet to get around Goldman with a jump cut right to switch directions.

Collins finds some space and searches for more by continuing outside past S Eddie Jackson towards the sideline and following the block of Mike Wallace upfield for a 30-yard gain.

There are far too many clips of jump cuts from Collins to choose from. Go watch his highlights from Week 8 vs. the Dolphins; that’s an impressive resume by itself.

This play was especially awesome because he makes a move, isn’t satisfied, and uses his lethal speed to push into the second level for maximum yardage.

This was one of my favorite drives of the year.

For the first time all season, I saw determination from the offense to claw back from a deficit and make big plays to (almost) take back the game. Collins was the guy who made that possible by running like bulldozer all night.

There’s a lot to like about this clip, starting with Collins’ ability in the passing game. In typical fashion, Joe Flacco makes one read and dumps it to Collins after finding nothing he likes downfield.

Collins is then quickly wrapped up by LB Arthur Moats and bodied by CB Sean Davis at the same time. He manages to shake them both off, stay inbounds and take it up the sideline for a 37-yard catch.

If Collins can continue to effectively churn out YAC as a safety valve for Flacco, then the team might feel comfortable moving on from Danny Woodhead and his $3.3M cap hit in 2018.

Three plays later, Collins ended up taking the ball in himself on an impressive 18-yard rushing TD.

Again here, we see Collins’ ability to absorb contact after initially finding no gaps and use his speed to break it outside to find a lane and the score.

Do I really need to write anything about this? I didn’t have words when I saw it happen and I still don’t to this day.

With everything on the line, Collins turned probably the worst possible play call on a 4th & 3 scenario into the play of the year for the Ravens.

Collins takes a toss left from Flacco and is encountered immediately encountered by Bengals DT Andrew Billings. This is why fans were begging for Gary Kubiak’s return…what were you thinking, Marty?

The play was dead. But not if you’re Alex Collins.

After tossing Billings aside, he proceeds to run past a total of seven Bengals defenders for a stunning 17-yard TD. This is the playmaking ability the Ravens offense has been desperate for.

Everything positive I mentioned about Collins earlier was exhibited on this play – he’s elusive, determined and runs with a purpose.

Fumbling is also a still major concern for Collins. After going eight straight games without a fumble, he put the ball on the ground twice in the final four games.

Notes: As Collins received more attention in a featured back role later in the season, his efficiency began to slow down. If he can learn to follow his lead blockers more often than relying on just his speed to get around defenders, he should string together more productive games. Collins has Pro Bowl potential. 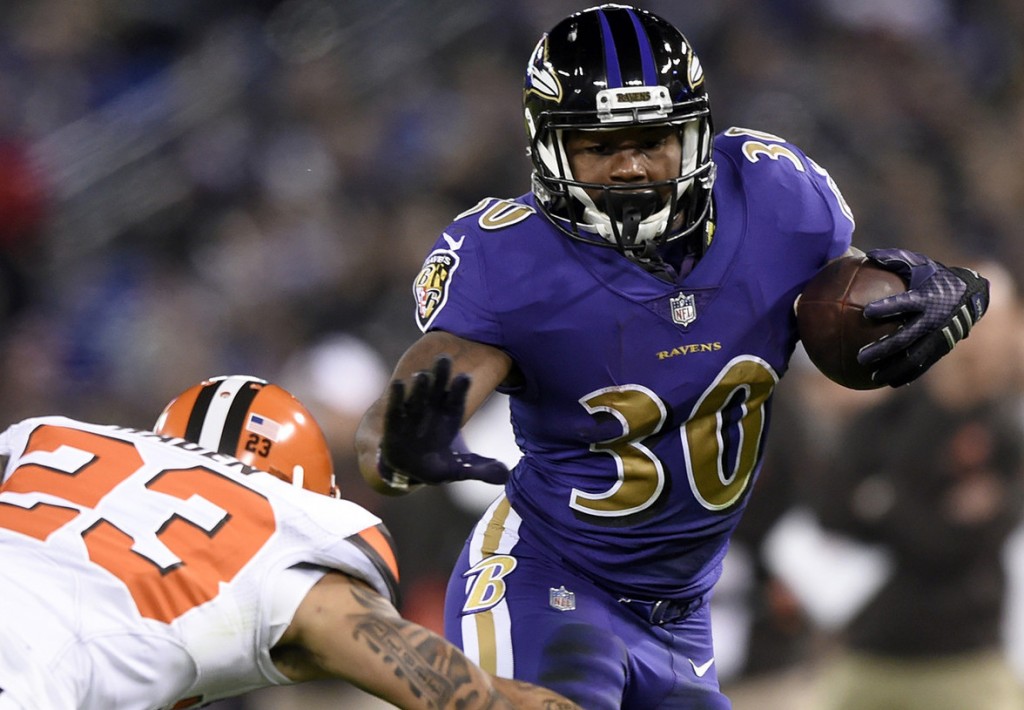 If Alex Collins runs with purpose, then Kenneth Dixon runs with A LOT of purpose.

After a strong showing in the second half of the 2016 season, Dixon proved that he can ball and will make it difficult for the coaching staff to hand over lead back duties to Collins right away.

There’s a reason why he once had the NCAA record for most career TDs.

Dixon does a great job of quickly recognizing running lanes and accelerating into the second level. And once he gets those legs churning, he’s a very difficult runner to take down. In my opinion, he’s tougher to tackle than Collins.

Let’s revisit some of Dixon’s best plays from his rookie season:

(2:08) Here we can see that Dixon runs in a very similar style to Collins. He takes the inside handoff and makes swift jump cut around the block of Nick Boyle to find open space.

Dixon quickly switches into second gear to crank it upfield for a 15-yard gain while mowing over CB Dre Kirpatrick in the process.

What’s great about this run is that he maintained elusiveness all the way into the second level and kept his legs moving until being corralled only by several Bengals defenders.

Let’s be clear: we don’t have the largest sample size to look at when discussing Dixon either.

He missed the first four games of the 2016 season due to a knee injury and only started to come on towards the end of the year. Granted, a play like this may not stand out compared to Collins’ highlight reel.

However, this run highlights big play potential and shows that he’s ready to work for his yards.

(3:07) Again, this won’t be the most exciting run you’ll see but it’s a perfect example of how strong of runner Dixon is.

After immediately getting hit in the backfield on 3rd & 1, Dixon shakes off the first two tackles to pick up the first down and proceeds to drag the rest of Steelers defense with him for a gritty 8-yard run.

There were 8 Steelers defenders in total that contacted Dixon on the play and it was only after the whistle blew when he was finally brought down.

This game was big for Dixon because not only did he run the ball well, he proved that he has what it takes to be big part in one of football’s greatest rivalries.

This is play is another good example of Dixon’s ability to quickly take advantage of open space.

The play starts with Flacco, who does a good job at selling the pass to get Brandon Graham to bite on the fake. This takes him way out of position to make the tackle on Dixon.

Dixon takes a quick toss left and finds real estate after some effective blocking by Ronnie Stanley and Mike Wallace.

He finishes with a stutter step on S Rodney McLeod to take him out of position and crosses the goal line with ease.

It’s also important to note Stanley’s athleticism. He does an excellent job at staying with Nigel Bradham throughout the play to escort Dixon and even helps Wallace with his block on Jalen Mills to finish strong.

Plays like this lead me to believe that Dixon may be a more refined runner than Collins is.

Dixon does a better job at locating running lanes and following his blockers to find yards. Although Collins may have more explosive plays, he’s often met by defenders early due to his predictable East-West running patterns.

Notes: We all know how much Harbaugh loves his role-model players. Another suspension for Dixon could very well cost him his roster spot. Dixon’s meniscus should likely be ready to go for OTAs, but this has been just one of several knee injuries he’s already experienced in his young career. This season will be critical for Dixon.

Which player should be the RB1 for the Ravens in 2018?