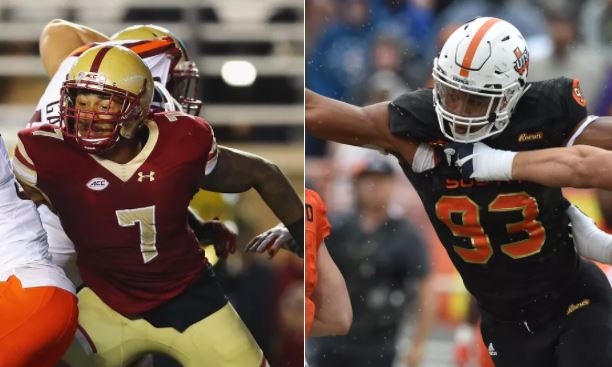 Despite selecting Tyus Bowser and Tim Williams in last year’s NFL Draft, it would not be a surprise to see the Baltimore Ravens put a heavy focus on pass rusher again next week.

Terrell Suggs very well may be playing in his final NFL season (or is at least getting pretty darn close to retirement) and after Suggs is a lot of unknown at the edge rusher position.

Of the group, Matt Judon seems most primed to take over for Suggs in the short term, but the likes of Za’Darius Smith, Bowser and Williams all have more to prove in their respective roles.

Could that lead to the position being addressed in the first round of the draft?

With the 16th overall pick, the Ravens are likely out of range for NC State’s Bradley Chubb, barring a trade up. After Chubb, two of the most realistic options for Baltimore at 16 are Boston College’s Harold Landry and UTSA’s Marcus Davenport.

Both athletic with high production in college (of note, Davenport had 17.5 tackles for loss in 2017 and Landry had 16.5 sacks in 2016), Landry and Davenport offer upside as pass rushers, but with differing playing styles.

The 6’3″ Landry projects to the NFL as more of a pure off-the-edge, get to the quarterback type, while the 6’7″ Davenport has the size and length to be an edge rusher or move inside to defensive end in certain situations.

Let’s take a look at what Landry and Davenport do well.

Landry’s speed off the snap and hand usage allow him to work around bigger offensive linemen instead of through them.

Since Landry is not a power type of rusher, having quick feet and active hands in his pass-rushing repertoire allows him to be more agile in confined spaces.

When it comes to pure speed around the edge, Landry is one of the best pass rushers in this draft class.

Paired with a (hopefully) renewed ability of the defense to get interior pressure, having such a quick rusher off the edge would be much-needed on the Ravens. This would allow Landry to make an instant impact in Baltimore.

Unlike Landry, Davenport is not as quick off the line and is far from a speed type. However, he does show similar hang usage and pursuit to Landry, and can convert his size to strength to fight through blocks.

With Davenport’s longer frame, though, he can win in ways that Landry does not. His height and longer arms allow him to close off passing lanes and bat down passes when rushing from the edge.

While both Landry and Davenport offer enough qualities to allow each to succeed at the next level, if both were in play at 16 for the Ravens, Landry would be my preferred option.

Landry offers more upside as a pure pass rusher off the edge and would pair well with Judon as a duo that together can fill Suggs’ void whenever retirement comes for #55.

Who would you rather the Ravens draft?