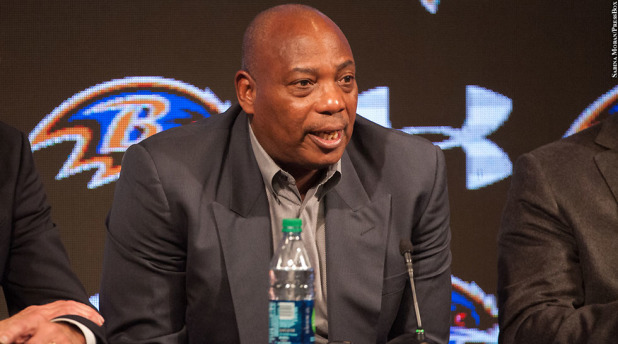 Ravens general manager Ozzie Newsome needs to alter his strategy of taking the best player available in the NFL Draft, according to David Ginsburg of the Associated Press.

“It is a process that completely made sense when the Ravens were Super Bowl contenders,” Ginsburg writes. “Unfortunately, after missing the postseason for three straight years, it is a luxury Baltimore can no longer afford.”

The Ravens admittedly have to add playmakers to end the postseason drought. The team has holes at wide receiver, the offensive line and tight end. The Ravens also need to find a pass rusher that could serve as the potential heir to the 35-year-old Terrell Suggs, the franchise’s all-time sacks leader.

This week’s draft is especially poignant for Newsome, who will step down as general manager after the 2018 season, allowing assistant Eric DeCosta to take over. Newsome is widely regarded for helping the Ravens reach the playoffs 10 times in the past 18 years and winning a pair of Super Bowls.

However, Newsome has faced some criticism for his inability to draft a franchise wide receiver and has “misfired” on three first-round picks — Travis Taylor, Mark Clayton and Breshad Perriman.

Will the Ravens look to end that slump by selecting a wide receiver, such as Calvin Ridley or DJ Moore, in the first round?

That question will be answered in the near future.

There is a slim chance the Ravens will take a defensive back with the 16th overall pick in this year’s NFL Draft because of glaring needs on other parts of the roster.

However, that strategy could change if Florida State safety Derwin James is somehow available to them in the first round, according to The Baltimore Sun’s Jeff Zrebiec.

“If Florida State safety Derwin James happens to fall to No. 16 — and it would be an upset if he did — the Ravens would have to be tempted,” Zrebiec writes. “James is a physical specimen who can line up just about everywhere on the field. He’d give new defensive coordinator Don “Wink” Martindale another weapon to employ in different situations.”

If James is taken prior to the 16th overall pick, the Ravens would not select a defensive back until one of the later rounds, or possibly not take one at all.

The team has solid depth in the secondary with corners Jimmy Smith, Brandon Carr and Marlon Humphrey.

Eric Weddle and Tony Jefferson are the returning starters at safety with Anthony Levine and Chuck Clark expected to push for more playing time.

The End of the Road for Perriman?

The Ravens have until May 5 to exercise the fifth-year option on receiver Breshad Perriman’s rookie contract, according to reports.

ESPN’s Field Yates predicts the Ravens likely will pass on the extension in light of Perriman’s struggles since being selected in the first round of the 2015 NFL Draft. Perriman has started just four games in the past three seasons. Over 27 career games, he caught 43 passes for 576 yards with three touchdowns.

Perriman missed his entire rookie season with a knee injury and has also been plagued by a concussion and sore hamstring.

In addition, Perriman is due a $649,485 bonus on the opening days of training camp. As a result, he will likely need to be stellar throughout organized team activities and mini-camp to see that money.

The team’s patience appears to be growing thin.

“He knows it’s his opportunity to make or break being a part of the Ravens,” General Manager Ozzie Newsome said shortly after the season.