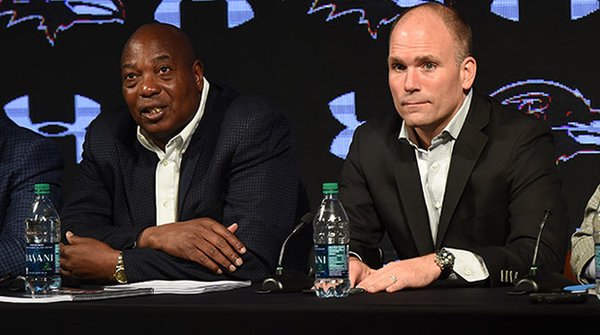 Ozzie Newsome orchestrated his final NFL Draft as the general manager of the Baltimore Ravens. He will retire as the GM following the 2018 season and assistant Eric DeCosta will take over.

By most accounts, the Ravens had one of the most successful drafts among the league’s 32 teams.

Newsome laid the ground work for a potentially successful season and helped build the foundation for the future, according to the “experts.”

Top of the Class

Pete Prisco, of CBS Sports, gave the Ravens an A for their draft performance. The only other teams earning that high mark were the Panthers, Bears and Buccaneers.

“The Ravens had two trade downs to pick up a bunch of extra picks, which really helped make their draft … Ozzie Newsome and Eric DeCosta had another good draft,” Prisco writes.

SB Nation’s Dan Kadar also gave the Ravens an A for their overall draft performance. He expects several players to make an immediate impact, while Lamar Jackson could be the quarterback for the future.

“Tight end Hayden Hurst was a bit of a surprise but the Ravens at least were able to move back and take him,” Kadar writes. “Then Newsome made the big move back into the first round to take quarterback Lamar Jackson. If that pick works out, he set up the future of the Ravens.”

Chad Reuter, of NFL.com, also liked what he saw from the Ravens and gave them an overall A-.

His three-day breakdown was:

“The Ravens picked up a slew of picks in two trade-downs and still got a talent at a need position (tight end),” Reuter writes. “That’s a great way for Ozzie Newsome to start off his final draft as GM. Hurst is a smooth, sure-handed receiver who will provide toughness inside and stretch the field.”

The Baltimore Sun graded the Ravens from an A- to a B.

“General manager Ozzie Newsome said it best Saturday when he acknowledged that he won’t be able to properly evaluate his final draft class for another two years,” Ravens beat writer Jeff Zrebiec writes. “In reality, if Lamar Jackson becomes a star, this year’s draft will be a success regardless of what becomes of the rest of the class.”

Pro Football Focus called the Ravens’ draft “above average.” The site was high on first-round picks Hurst and Jackson. PFF also liked the potential of some of the later selections, but it will take some time to determine the impact of these players.

Andy Benoit of Sports Illustrated handed out individual grades. First round pick Hayden Hurst earned the highest grade at an A-. However, he gave the Ravens a C+ for selecting Orlando Brown, an offensive tackle from Oklahoma, in the third round.

“Did the Ravens spend a third-round pick simply on depth (albeit at an important position)?” Benoit asks.