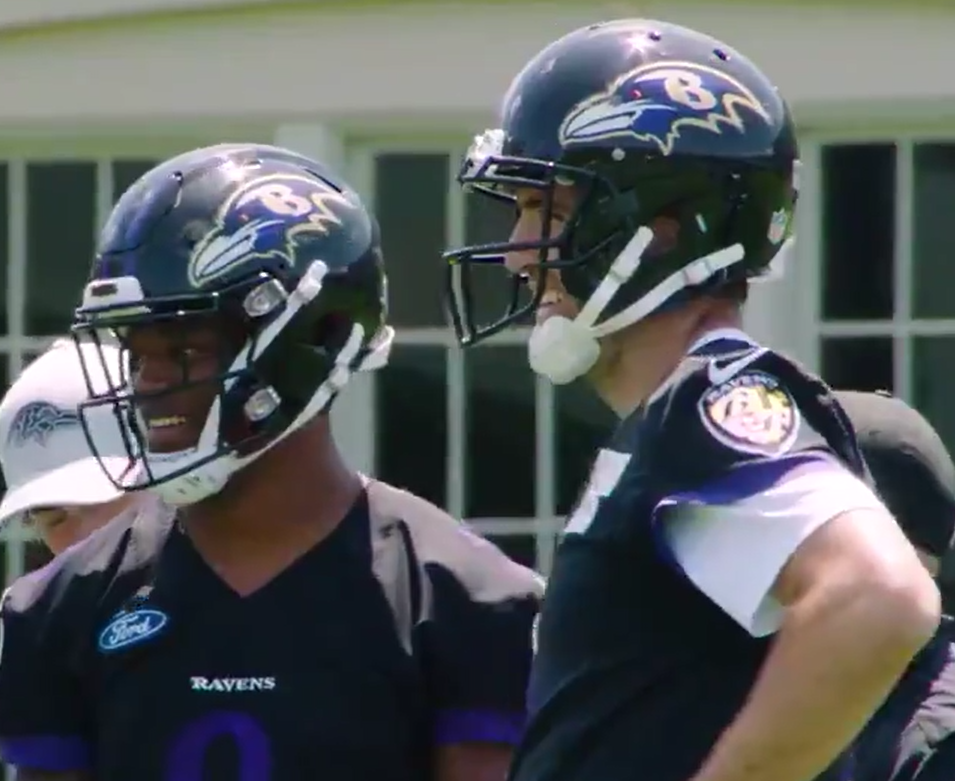 Ravens quarterback Joe Flacco “completed more long passes” at the recent OTAs than in the past several years, according to Mike Preston, of The Baltimore Sun.

Flacco looks to be in the best shape of his career and doesn’t appear to be hampered by an ailing back or a sore knee that slowed him down over the last couple of seasons. He is also easily outshining both Robert Griffin III and rookie first-round pick Lamar Jackson.

“Clearly, Flacco’s throwing motion is better than either Griffin’s or Jackson’s,” Preston wrote. “Griffin has more of a slingshot motion when he throws and Jackson needs to work on technique and consistency. He has made significant progress in recent weeks.”

The hope is Flacco is able to carry over the momentum into the regular season.

In addition to Flacco, the Ravens overhauled group of wide receivers are also playing well, according to Garrett Downing of Baltimoreravens.com.

Free-agent acquisitions Willie Snead, John Brown and Michael Crabtree each made key plays throughout the practice. Flacco appeared to already have “chemistry” with the three wideouts during 11-on-11 drills.

“There might have been five or six long throws that were completed – that was good to see,” coach John Harbaugh said after the practice. “We do have some speed. The quarterbacks are doing a good job of pushing the ball downfield and forcing them to go make plays on the ball deep. That’s how we like to throw deep. We want to throw it out there and go get it.”

Chris Moore also had one-handed catch against Brandon Carr in coverage, according to Luke Jones, of WNST.

Another positive sign was that several key players, including linebacker C.J. Mosley and cornerback Tavon Young, were back on the practice field.

Mosley had suffered an undisclosed injury in the previous OTAs was able to play this week. Tavon Young, who missed last season with a knee injury, did not have any issues moving around. He had an interception last week and will push for a starting job in the slot.

“I feel great,” Young said after the practice Thursday. “I spent a lot of time in the training room in the offseason – the whole offseason, during the season – just working on my knee running, getting it strong. Now, this is my first time playing football in almost a year, and I feel good, and I feel like I’m back to myself.”

Only four starters — linebacker Terrell Suggs, guard Marshal Yanda, cornerback Jimmy Smith and tight end Nick Boyle — were missing from practice Thursday. Smith (Achilles) is the only one dealing with an ongoing injury. The rest were excused absences.