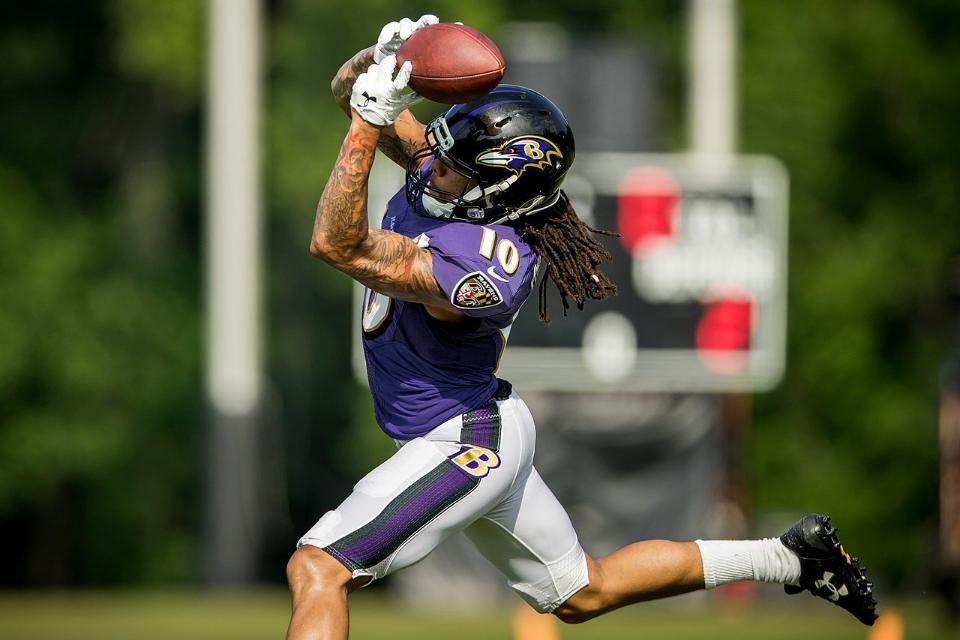 While much of the focus has been on free-agent receivers Michael Crabtree, John Brown and Willie Snead throughout the offseason workouts, another player has perhaps outperformed all three of those veterans.

Third-year player Chris Moore has been a force and is making a strong case to be a regular part of the rotation this season.

“I just come out here, keep working hard, keep trying to make plays for the team,” Moore said. “That’s my biggest thing. Every time I come on the field, I just try to find a way to make big plays.”

The Ravens selected Moore from the University of Cincinnati in the fourth round of the 2016 NFL Draft. He was a big-time playmaker for the Bearcats and owns the program record for touchdown receptions with 26.

His explosiveness made him appealing to general manager Ozzie Newsome.

Moore appeared in 15 games with the Ravens as a rookie and finished with seven receptions for 46 yards without a touchdown. Moore also struggled with some key drops.

Last season, it was clear that he worked hard in the offseason to overcome those challenges.

Moore performed better as the season evolved and finished with with 18 catches for 248 yards and three touchdowns. He was also a force on special teams as a returner, averaging 26.6 yards on 13 kickoff returns.

Moore has maintained that momentum and impressed coaches throughout the OTAs and mandatory minicamp. Some of the highlights included a one-handed reception in tight coverage against Brandon Carr and an impressive diving catch in the end zone.

“It was my opportunity to show what I can do, and show that each week I keep getting better and that I’m here to perform,” Moore said about those plays. “That’s what I’m here for.”

His performance has caught the attention of his coaches.

“I think the No. 1 thing is consistency with Chris,” wide receivers coach Bobby Engram said. “Chris has always been talented, but I think the thing that you see now is him consistently getting open and making the plays. And part of that is just the natural development as a receiver. … He’s been working his butt off.”

While the offseason workouts are not an accurate gauge of how well a player will perform when the season starts (see Breshad Perriman in 2017), Moore is developing a solid track record for performance. The goal now is keep playing well throughout training camp and become another viable weapon for quarterback Joe Flacco or Lamar Jackson.

For now, Moore has remained humble and plans to learn from the other veterans like Crabtree.

“The big thing I’ve been taking from him is his release, because he’s a bigger receiver, stronger, so I just try to take some of the stuff he does,” Moore said about Crabtree. “He gives us little details and hints to do against the [defensive backs], because that was going to be one of my struggles was against the press. So, being able to see him and as good as he is at it, [it’s helpful to] just to take some of his techniques.”