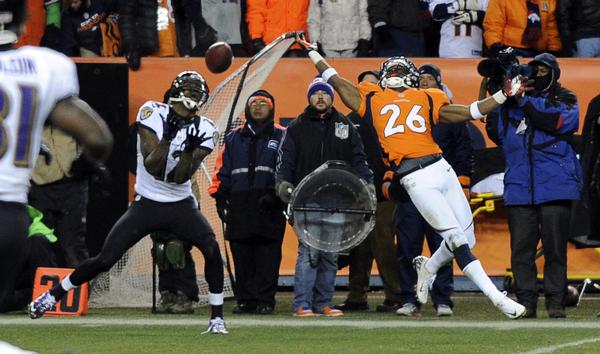 Who are the 2018 Ravens? After two games, I don’t think we have much of an idea. You have to take both of their first two results with huge piles of salt, in my opinion. Week 1’s because Buffalo looks like the worst team in the NFL, and Week 2’s because Marvin ALWAYS has Joe’s number, with a few notable exceptions over the years.

Hopefully we’ll get a better idea of where this squad stands here in Week 3. Denver is 2-0, but they’ve had two close wins at home against winless teams. Baltimore needs to make a statement.

To see our predictions for this game, click here.

In the meantime, here are the stats, notes, quotes, and more to get you ready for Ravens-Broncos. 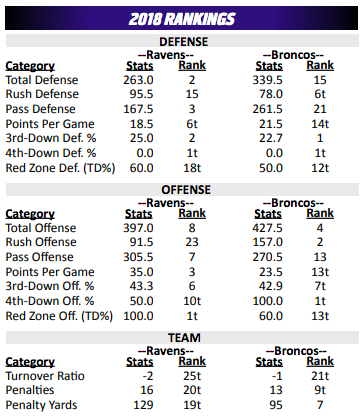 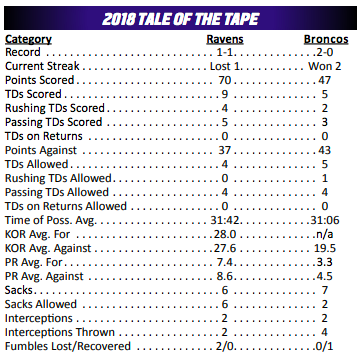 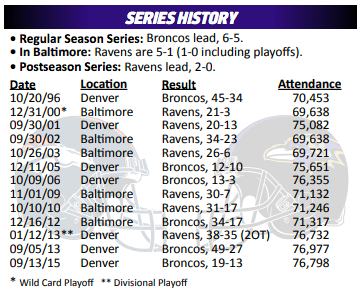 Ozzie Newsome on what he has learned about Baltimore during his time as GM:

“I don’t know if any city has more of a solid fan base than we do. Those fans were there with us when we were basically nothing [in 1996]. When we became something, [teams] were intimidated in coming here to play at M&T Bank Stadium. This city has issues like most big cities, and you realize that just listening to the news every day. But I’ve come to understand that even with those issues there is a common bond here, and the Ravens help bring people together. Regardless if you live in the city or in one of the surrounding counties, or if you attend public or private school, they rally around this football team. This is truly a special place, a special city with a passion for football.”

“This is the NFL. It’s a week-to-week business, and everyone understands that. It’s one game at a time. You can win by 40 one week and lose by 40 the next week.”

S Eric Weddle on bouncing back after Week 2’s loss at Cincy:

“We’re fine. It’s a 16-game season. You’re not going to play great every week, but you have to find ways to win, and we didn’t do that [at Cincy]. The sky’s not falling, but we have to correct some things. That’s why we have practice and coaching. Everyone in this room is accountable. We will take a look at ourselves first and see what we can do better and get back to work.”

ESPN.com’s Field Yates on why S Eric Weddle should have been included in ESPN’s Top 100 projection player rankings:

“What more does Weddle have to do to prove his place among the game’s best safeties? Since signing with the Ravens in 2016, Weddle has 10 interceptions to go along with [over] 180 tackles. He’s the quarterback of the Ravens’ secondary, a reliable teammate and durable, too.”

DT Brandon Williams on if he’s OK with a “thankless” job that sets others up for success:

“I’m totally fine with what I do. I know it’s a dirty job. Somebody’s got to do it, and I’m happy to raise my hand and volunteer to do it. As long as my guys have my back, and as long as my guys are making plays around me, that’s all I care about.”

GETTING TO KNOW YOU ~ Q&A with Tavon Young

What song or lyric would be the theme for your life?

“‘So I had to grind like that to shine like this,’ from ‘Dreams and Nightmares,’ by Meek Mill.”

What is your favorite sport to watch besides football?

“Basketball. I was a basketball player first growing up – AAU, traveling, doing all of that. I actually only played one or two years of little league football, and then I played basketball all the way until my 10th-grade year in high school, when I began playing football. In basketball, I played point guard.”

Do you have any memorable jersey swap stories?

“My very first NFL game, I swapped with my high school teammate, [current Eagles CB] Ronald Darby, when he was with the Buffalo Bills during my rookie year. That was cool.”

What’s the best sports moment that you remember?

“I had a couple buzzer beaters in basketball growing up! I remember it was a fast break, an open layup, and I was just going into the basket like, ‘I can’t miss this.’ I made it, then everybody charged the court. It was fun. This was little league, like 10 or 11 years old.”

If you could trade places with anyone for a day, who would it be?

What is your favorite movie?

“I like ‘All About the Benjamins.’ You have to see that. Mike Epps and Ice Cube.”

“I’d have to play me. I don’t know, because these ‘look-alikes,’ sometimes they are way off.”

Would you rather be able to fly or breathe under water?

“Breathe under water, just because they said we’ve only discovered a little bit of the ocean, so I would like to swim all the way around and see what’s down there.”

Denver G/T Billy Turner spent a week on Baltimore’s practice squad in 2016 before being claimed by the Broncos.

Does the term “Rocky Mountain Oysters” mean anything to you?