Before you vomit the Saints have struggled to rush the passer and are allowing a flammable 11.2 yards per pass attempt this season. They’ve been the inverse versus the run holding opponents to a league-worst 3.0 yards per carry. Eli played a strong game last week and has the opportunity to build on that in what couldn’t be a better matchup.

The Jags have played it cautiously with injuries in Fournette’s career but once he’s active they feed him aggressively. The matchup is a middling one but could reap much bigger benefits. Jacksonville should put an absolute stranglehold on the rookie led Jets offense leading to big-time scoring chances for Fournette.

[Related Article: Flacco Set to Light up the Steelers]

The Patriots have gone out of their way the last couple weeks to force feed Michel touches. With the news of Rex Burkhead going to IR, Michel stands alone as the early-down back in New England…and more importantly, the favorite for goal-line work. Josh Gordon has a chance to be active this week and even in a decoy role, he’d open up the field. I’ll bet on the Patriots offense to look like it’s efficient self again, giving Michel multiple touchdown upside.

This could be the breakthrough spot. The production has been there and his targets should get a bump with Evan Engram out. Saquon Barkley has been terrific but the Giants O-Line struggles have capped the effectiveness of their run game. Football Outsiders has them ranked 31st in adjusted line yards. OBJ has multiple touchdown potential in this one.

TY has averaged 94 yards per game in his career versus the Texans. While Andrew Luck’s yards per attempt is way down in Frank Reich’s new offense, Hilton’s volume (32 targets this season) gives him more than enough opportunities to capitalize versus a secondary allowing a 119 passer rating, 2nd worst in the NFL.

Gabriel has been heavily involved in each game for Chicago but based on the touches I saw I would have guessed his adot (average depth per target) was 2. While nobody will confuse him with 2013 Josh Gordon, his 9.5 adot is higher than Davante Adams, Sammy Watkins, and TY Hilton at this point. Also look for him to scoop up a couple more targets due to the absence of rookie slot WR Anthony Miller. His target share should at the very least pay his minimal cost with room for more if he and Trubisky connect down the field vs a Bucs defense giving up 8.6 yards per pass attempt (4th worst in the NFL) 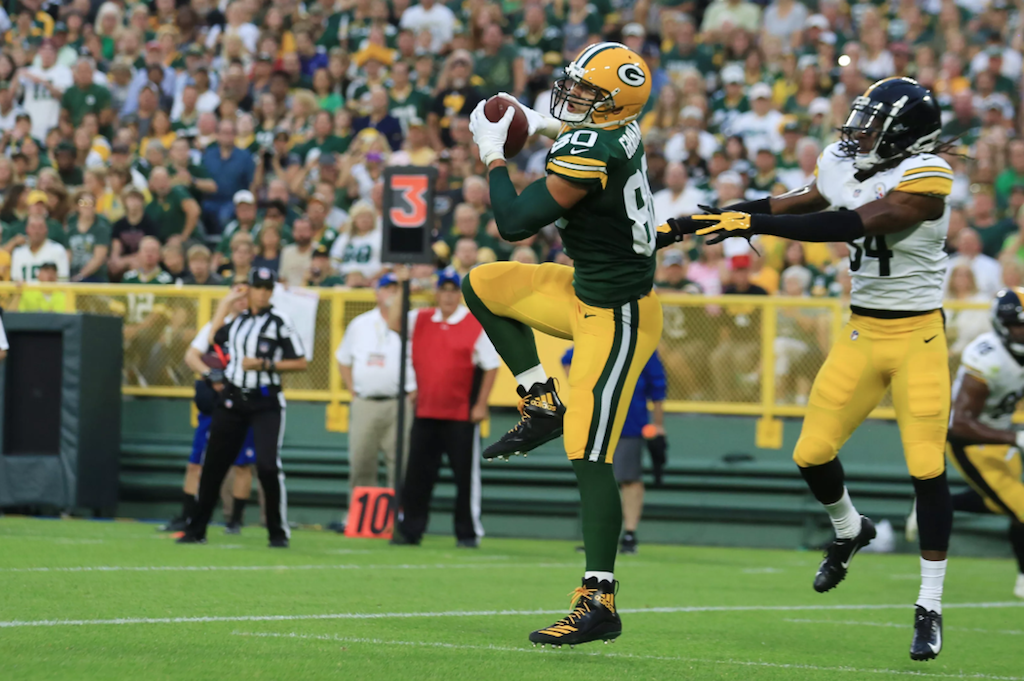 Spots like this are usually where you plug and play the home favorite defense and their running back (flashes back to all my Latavius Murray/Vikings Def stacks last week). Since the Packers have a 3-way committee going at running back and don’t really finish drives in that manner we’re going with the next best thing. The Bills have shown seam vulnerability each week this season to much lesser talents. This should be the week for Graham’s first Packer touchdown(s).

Provided Joe Mixon doesn’t return this week this is a good spot for Gio versus a team that concedes targets to running backs in bunches. They’ve also given up 5.2 per carry on the season. Bernard could push for 25 touches in a matchup with less pace concerns than a week ago. He’s a no brainer play this week.

The Cowboys current offensive line just isn’t good enough to play the brand of keep away they’d like. Their pass catchers surely elicit more chuckles than concerns from defensive coordinators these days. Detroit isn’t without its warts from a pass rush and run defense standpoint but they’ve played well over the last 5 or 6 quarters including holding Brady and the Pats in check. At the end of the day, until Dak throws for over 200 yards in a game I’d keep playing the opposing defense. Especially at this price.