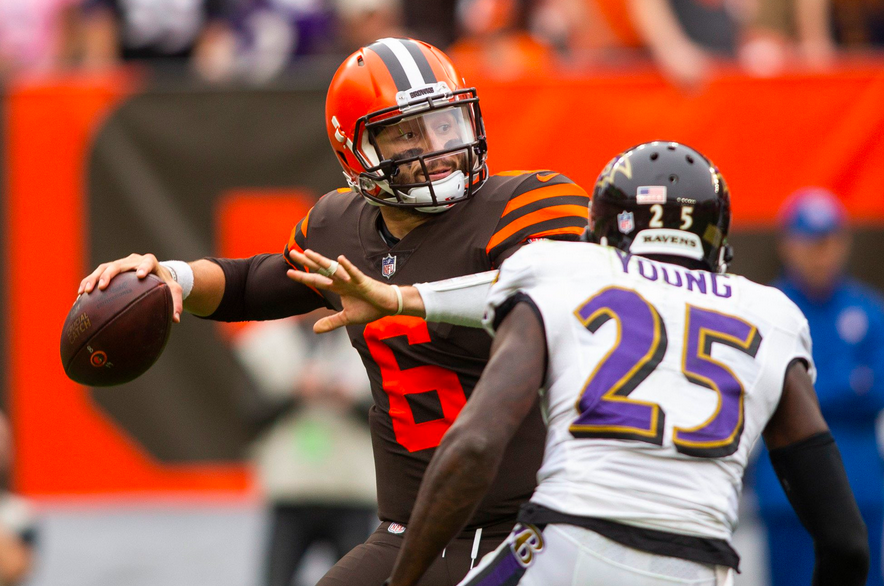 Eric Weddle has reminded us time and time again that this isn’t “the same old Ravens.” But, as they seemingly always do, they followed up a big win with demoralizing loss, losing to the Browns 12-9 in OT.

Baltimore, who was 18-2 over their last 20 games vs Cleveland, had their opportunities in this one but ultimately couldn’t make the big plays when they needed to.

To make matters worse, the Steelers and Bengals both won, essentially a second L for B’more. The Ravens are now 1-2 in divisional games (all on the road, if you’re looking for a silver lining).

Let’s take a look at what went wrong, learn from it, and move on to Tennessee.

Joe Flacco (and the rest of the offense) failed to score a TD for the first time this season. He finished just under 300 yards and threw an interception (on a slightly tipped ball) against a young secondary that, while talented, came in ranked 23rd in passing yards allowed.

That said, it was a very blah day for Joe and I expected more out of him today. He was awful on third down, as the team converted only four of 16 tries.

The offensive line has been playing better, and they did a decent job today against a good Cleveland pass rushing unit. They only surrendered two sacks and kept Joe upright, for the most part.

The problem I have is the run blocking. It has GOT to get better. The Ravens actually ran the ball 25 times for 116 yards in this game, a 4.6 ypc average. But that’s in major part thanks to two big runs of 19 and 17 yards by Alex Collins and Buck Allen, respectively.

They haven’t been able to impose their will and dominate for an entire game. It’s been a lot of 2-3 yard gains and tackles for losses. It has to improve.

Another game, another disappointing backfield performance. This is the same defense that allowed 40-year-old Marshawn Lynch (I think he’s 40) to rush for 130 yards just last week.

Yes, the offensive line is letting these guys down and making their job tough, but a good back should be able to make things happen on their own from time to time. Collins has had a season to forget, and came up very average once again. Excluding his 19 yard run, he ran 11 times for 40 yards. It’s just very underwhelming for a guy who looked on the brink of greatness just last year.

Buck Allen finished with eight carries for 34 yards and did his best Collins impersonation with a costly fumble in the second half.

The Browns did a great job on Smokey Brown today, limiting him to just four receptions for 58 yards on 14 targets. On the one or two plays he got good separation, Flacco missed him.

Willie Snead is the only guy that really played his role well. He caught five of seven pass attempts for 55 yards, including multiple first downs. He’s a very reliable target for Joe and he’s gonna be consistent game in, game out.

Chris Moore also made a big catch to convert a crucial third down in OT, just to be called for a block on the back on the very next play, a big run that would have set Justin Tucker up for a game winning field goal.

But the guy I really (don’t?) wanna talk about? Micheal Crabtree keeps this up, and he can make like a tree and leave! He dropped two first down passes early on that killed drives, and then dropped a very catchable would-be game winner from Joe Flacco in the final minute of the game.

He’s the guy most to blame for this loss today in my estimation. He’s the reason the group gets this grade. If he doesn’t step it up, maybe give Dez a call?

What tight ends? These guys didn’t show up at all today. Rookie Hayden Hurst might as well sat out this one, as he had one catch for 7 yards in his debut. I expected him to show up big in this one, convert third downs, and catch a TD. Maybe he needs time to get back into the swing of things.

The rest of the tight ends combined to make four catches for 34 yards. Jared Cook just last week caught eight balls for 110 yards and two TDs on this Browns group. They needed to do more with the little opportunity they had.

Entering this game, The Browns’ 152.8 rushing yards per game ranked second in the NFL. Today, they finished with 112 yards on 28 carries. For a line missing one of their premier run stuffers in NT Michael Pierce, I thought they held up well to a very good three-headed monster that is the Browns backfield.

One positive takeaway from this game was the pressure up the middle. Both Brandon Williams and Willie Henry (who was making his season debut) had a sack on Baker Mayfield.

The Ravens had five sacks and did a decent job against stiff competition in the run game. What gives? Well, the linebackers give… all day to throw the ball today. Suggs had a sack, while ZaDarius Smith and Kenny Young combined for another, but there were so many times that Baker had all day to wait for something to come open. Smith has been the best pass rusher this year, and he hurried Mayfield into his one interception.

Matt Judon once again was a non factor, and C.J. Mosley didn’t play well at all. I saw him get beat in coverage multiple times against an average tight end in David Njoku, who finished the game with six receptions for 69 yards. These are guys that need to make an impact on games, and thus far they haven’t done that. Fifth-round rookie Kenny Young has outplayed them both. As much as I love that Kenny Young has played well, that’s not a good thing.

A lot of that came over the middle and the blame can be placed on linebackers (as I did above). But this is a veteran group that is touted as a top unit in the NFL. A rookie shouldn’t have this kind of success on a team that stifled one of the best passing attacks in the league just last week in Pittsburgh.

Five different Browns had receptions of 24 yards or more. That has to get cleaned up, and the pass rush needs to help by speeding the plays up.

Another week, another blocked kick. This is starting to become a real issue. Justin Tucker made all of his other kicks that weren’t blocked, but if they don’t give up that block, they win this game. Against Denver, they had the “he made an illegal play” defense. This week? Nothing. The player who blocked the kick just beat his man around the end. It’s become an issue.

It’s not just the kicking aspect of special teams that hasn’t been special. Tim White worries me every time he’s receiving a punt. He was lucky today that his fumble was recovered by the Ravens, and I just don’t trust him. Not only that, but I just don’t have any hope that the team will take a punt back for a TD. I sure miss the days of Jermaine Lewis and Jacoby Jones.

Marty, the two-quarterback sets need to go. They aren’t fooling anyone. Everyone watching at home on their TV knows what’s coming. And if you’re gonna line Lamar Jackson up to take snaps, pull Flacco to the sideline so he isn’t just standing there. It’s essentially a one-man advantage for the defense. Just bring in an extra TE or lineman and play big boy ball.

To have a first and goal from the one and throw the ball is a head scratcher for me. I know the run game has struggled, but if they can’t score from one yard out on three straight runs, the entire team doesn’t deserve it.

You threw the ball 56 times in a game where you never trailed by more than six? And when the passing game was less than inspiring anyway? Curious, to put it mildly.

Defensively, I thought DC Wink Martindale didn’t throw enough different pre-snap looks at Mayfield. There wasn’t enough pressure generated consistently. But I do credit Mayfield for making plays and buying time with his legs when the Ravens got close to him.

To lose in Cleveland for the first time since 2013 hurts. This is a much improved Browns team with Mayfield at the helm, but this is a game Baltimore should have won. If it weren’t for ANOTHER blocked field goal or ANOTHER Crabtree drop, we would be talking about a different result.

But even so, I expected the Ravens to win this game handily. It shouldn’t have even come down to the Crabtree TD drop.

There are things that need cleaned up ASAP. Some of them (the drops, the blocked FGs) come down to simple executition. Others (covering the middle of the field, the running game) concern me a bit more.

Week 6 in Tennessee becomes a turning point game for Baltimore. They gotta come out with a win. Lose that one, and all the sudden you have three conference losses, with two games against NFC power houses and another against the Steelers looming before the bye.