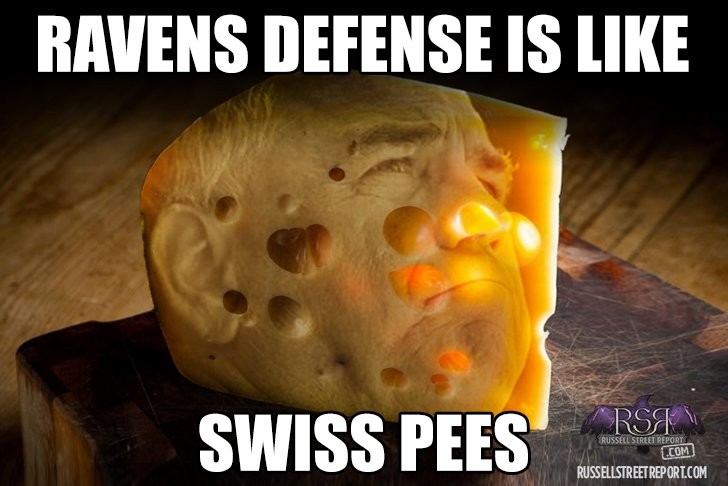 Stats, notes, quotes, and more to get you ready for Ravens @ Titans in Week 6. It’s the weekly Crab Bag! 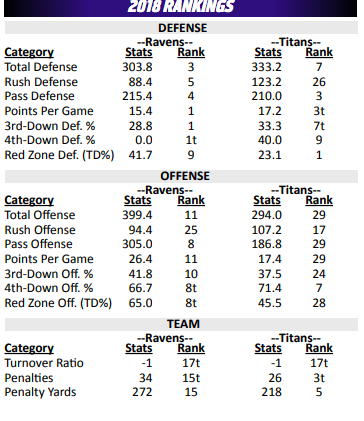 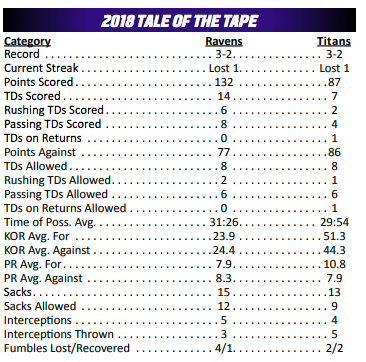 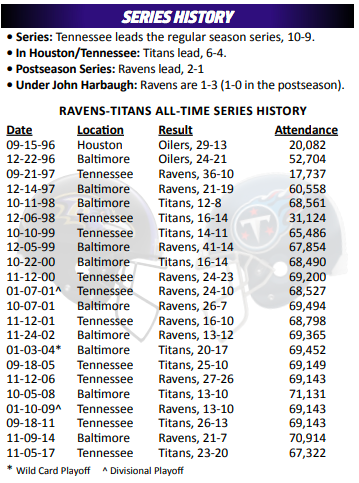 “The pieces are in place where we can be really good. But that doesn’t mean anything right now. You still have to go out and produce.”

OLB Terrell Suggs on the Ravens’ mentality heading into Week 6 after last Sunday’s defeat at Cleveland:

Browns QB Baker Mayfield on TE Mark Andrews, with whom he played at Oklahoma:

“Obviously, he’s a very, very big dude. He’s 6-5. I think he’s about 260, but he can run. I think it’s the size plus the talent, which normally you don’t get that mixture, so he’s blessed with that. And then, I think his football I.Q. is something that people didn’t realize until you sit down and talk with him. He’s a guy that realizes what you want to accomplish on offense, and then when you mix that with how talented he is, that’s a dangerous duo.”

QB Joe Flacco on how quickly his rapport with WR John Brown developed:

“You could see that he was special from an early point. But I would say it was in the first week of training camp, when we were able to really start getting some of the stuff that we were going to be doing during the year. When we’re in pads, against a good defense of our own – you could really start to see some of the things that make him special. He’s really smooth, he has really good ball skills, and he does a lot of things really well that help him out.”

“Man, he’s a top-notch athlete and a really good player. I scouted him a lot when he came out [of college]. I had a lot of respect for his talents, and he appears to be off to a great start in his career.”

GETTING TO KNOW YOU ~ Q&A with Buck Allen

You attract a lot of attention with your unique touchdown dance. Can you explain the meaning behind it?

“My childhood friend, Mike, passed away. I did it first on Monday Night Football, and I said when I got in the end zone, I would do Mike’s dance. The dance is called ‘whoop’ – it’s a Florida dance. That was his signature move, and I adopted it and do it with pride. I do it in tribute to him. Whenever I’m in the end zone and thinking about him, I do it.”

You’re heavily involved in the Boys & Girls Club. Why does that organization have a special meaning to you?

“I just love kids, honestly. I grew up around the Boys & Girls Club. My whole thing is that it takes two – you and someone else – to believe in you. I had that one person that was there and made a difference for me. I figure there are a lot of people out there that used to be like me when I was younger. I remember growing up, they had some guy come talk to us, but he’d never been through what we’d been through. It was hard for some of the kids to listen and relate. So now if I can talk to kids at a Boys & Girls Club, I can relate to them, because I’ve been through what they’ve been through. I know how it feels to not know what you’re going to eat next or what you’re going to wear tomorrow for school. You have to believe in them, like someone believed in me.”

Basketball season is almost starting. Do you have a favorite team or player?

“I’m a big Derrick Rose fan. My uncle was a Bulls’ fan, and I watched them growing up. I don’t really have a team; I more so have favorite players. I like their work ethic, the game, the effort they put in. ‘D-Rose’ is my No. 1.”

Why did you major in sociology at USC? What do you hope to do with that degree?

“My brother went to prison when he was young, and the group of guys he was with turned on him. So when I got to USC, my advisor asked what I wanted to study. I was trying to understand people more, and I told her the story behind it, and she suggested sociology. I wanted to understand why people do the things they do. [I want to] read a person and their body language.”

How much pride do you take in being a college graduate?

“I take a lot of pride in it. I was the first person in my family to go to college, to graduate, and I even gave a [commencement] speech. There was a lot of hard work that went into it. College isn’t easy, and it isn’t for everybody. I always thought college wasn’t for me, but I had the right people surrounding me. The academic program there is second-tonone. I was blessed.”

If you had to impress head coach John Harbaugh with one dish, what would you cook?

“I would make him a good, homemade burger. I also cook a good shrimp alfredo.”

“As a team, it’s make the playoffs and then go to the Super Bowl. For myself – just stay consistent, make plays when my number is called. I would love to be in the Pro Bowl; that’s one of my goals. But mostly, I want to help this team win.”

If you were in the Olympics, in what event would you medal?

“Gymnastics. Growing up in the country, I learned how to do backflips. Seeing Bruce Lee running up a wall and flip, I figured I could do that, too. If he can do it off a wall, I know I can do it on the ground. Everybody where I’m from in the Florida country knows how to flip.”

What is the best advice you’ve ever been given?

“My grandma, when I was little, told me, ‘The time of day belongs to anybody.’ I really didn’t understand that as a kid. As I got older, I realized that she meant that you never know what someone is going through. I try to speak to everybody now, because you never know if they need that friendly ‘hello.’”

Tennessee injured reserve WR Michael Campanaro, a Clarksville, MD, native, spent the 2014-17 seasons with Baltimore after being drafted in the seventh round. As a Raven, he averaged 26.4 yards on kickoff returns, as well as 11.4 yards on punt returns. He totaled 310 receiving yards, 131 rushing yards and 4 total TDs over four seasons.

Tennessee LB Kamalei Correa was a Ravens’ 2016 second round draft pick and played with Baltimore for two seasons, until he was acquired by the Titans via trade in August of 2018. Correa tallied 11 tackles (8 solo) and saw action in 25 games for the Ravens from 2016-17.

Titans WR Darius Jennings was born in Baltimore and played football at The Gilman School from 2007-11.

With country music? That would be my guess. Blech.