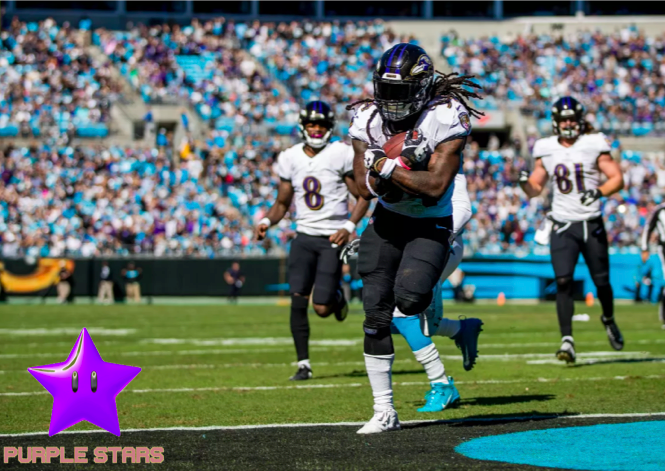 Listen, I’m an optimist when it comes to this stuff. Purple Stars was created to focus on the positives and highlight the Ravens players who deserved recognition for making an impact. So far it hasn’t been too hard to pick the true standout players from each Ravens game this season. Even during their other three losses, we’ve seen players on both sides of the ball step up and make the big plays necessary to stay competitive. Each recipient of a Purple Star has been well-deserved and this truly has been a fun piece to write every week.

But I’m going to be real with you…the fun bus has taken a hard stop at Week 8.

After totally getting outcoached by the Panthers, the Ravens’ season is now in a critical state. Each game has become a must-win and the margin for error is smaller than ever after falling to 4-4 in a strong division with a very tough slate of games ahead. In their remaining eight games, the Ravens will face five offenses that rank in the top 10 in YPG (Buccaneers – 1st, Chiefs – 3rd, Steelers – 4th, Chargers – 6th, Falcons – 7th) and possess elite offensive players that will cause this team problems. But it’s their remaining divisional games that will be most crucial for the Ravens, as they currently sit at 3rd place in the AFC North with a 1-2 record in the division.

With that said, these next two weeks could be the season for the Ravens. The Ravens will face a Bengals team that has bested them once already and a Steelers team that has delivered them heart-breaking loss in the second meetings over the past two seasons. Will next week be the trilogy? If so, that would put this team in a very deep hole to climb out of.

I’m not calling the season, definitely not this early. But it’s hard to stay hopeful upon seeing how low the floor can get for the Ravens after being completely dismantled this week. The Panthers put up 36 points on a Ravens defense that was averaging a league-best 14.4 PPG allowed to their opponents coming into this week. Cam Newton torched the Ravens with triple-option sets and picked apart the secondary in zone coverage by taking advantage of mismatches against linebackers and safeties. C.J. Mosley struggled heavily against the elusive Christian McCaffrey and Tony Jefferson’s TE struggles continue after getting embarrassed by both Greg Olsen and Ian Thomas.

The Ravens pass rush and edge containment was perhaps the most concerning aspect of the defense. Newton wasn’t sacked once and appeared to have ATS on every passing down. This allowed him the flexibility to sit back in clean pockets or scramble for 52 yards and 1 TD that looked way too easy. The Panthers’ heavy use of outside run concepts to complement the speed and field vision of Newton and McCaffrey was too much for the Ravens to handle.

The offense shouldn’t be absolved from blame either. Joe Flacco had a rough outing that consisted of poor ball location and two INTs that looked awfully regrettable. I continue to stay weary of an offense that puts this much weight on an inconsistent passing game to carry them, especially when Flacco is known to have “off-games” like this. The WR and TE groups were equally unimpressive and were plagued with drops all afternoon. John Brown, Hayden Hurst, Mark Andrews and Willie Snead each had one, and Snead was also victim of two OPI calls. Brutal.

The offensive line truly looked like a unit that was starting a third-string LG, a rookie RT and a LT who suffered a big injury mid-game. The run blocking was horrendous and was the result of confusing blocking schemes and consistently missed assignments. Can somebody explain to me how this team expects a TE to pull to the opposite side of the line to block a DB blitz without whiffing? Beats me. Although the Ravens have continued to run the ball, it still appears like an afterthought in their offense due to the lack of success up front.

This has been the most difficult week to write this column. Although there were a handful of Ravens who stood out at times, there wasn’t a single player who impacted the game substantially enough to be worthy of a full write-up. If I had the choice, I wouldn’t give a Purple Star to anyone.

But as I stated earlier, Purple Stars was meant to shine light on the positives and this week is no exception. This week’s winners didn’t do anything too special but simply performed well enough to be considered better than the rest.

Matt Judon had his best game this season and particularly played well in pass coverage. He was tested frequently on the first few Panthers offensive drives and held his ground on various outside looks given to Christian McCaffrey. Judon displayed great closing speed in containing those outside plays and once again was a great tackler as in previous games this season. Although Judon has been a lot more active stuffing ball carriers lately, his lack of production in the sacks department has been underwhelming.

Although Brandon Carr didn’t make any significant plays in this one, I’ve been very impressed with how he’s held up in the absence of Marlon Humphrey. With how sloppy Jimmy Smith as looked, Carr has fortunately been a bright spot in the outside CB spot and has been allowing few completions over the past two games. Carr has also has had the best ball skills of all the CBs as he now leads the group with 8 PBUs(!) this season. If Smith continues to struggle, it would be interesting to see the Ravens implement Anthony Averett into the mix.

Yes, that fumble was awful. Yes, it’s become a habit he needs to correct. Yes, he probably wouldn’t win a Purple Star during any other week. But one mistake (on a play in which the offensive line shared a big part of the blame) shouldn’t be the defining factor in what was a solid game for Alex Collins. This was Collins’ second-highest YPC mark this season after having success on various long rushes, including several for first downs. His TD run was his most impressive run by far as he displayed fantastic contact balance to spin-off two Panthers defenders for the tough-earned score.