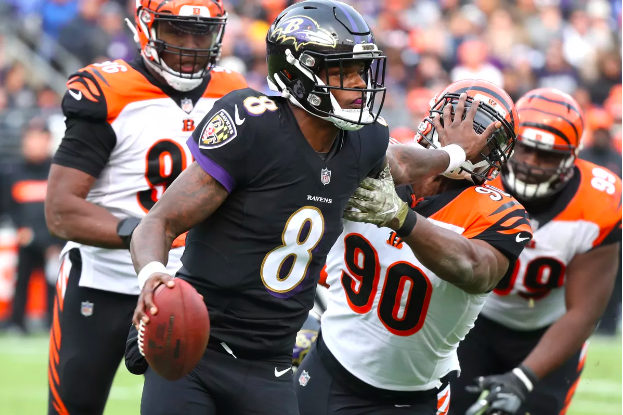 — Alex Smith (broken leg) is out for the year. Colt McCoy will start and Mark Sanchez was signed as his backup.

— Kerryon Johnson (knee) is week to week. With a short week, I would plan to be without him.

— Jameis Winston once again is the starting QB for the Bucs.

— Marcus Mariota suffered a stinger Sunday. His availability is unknown. Blaine Gabbert would get the start.

— Josh Allen is looking like he may start this Sunday for the Bills.

— If you haven’t already, pick up Tre’quan Smith and D.J. Moore.

— Kansas City and the Rams have a bye.

Tennessee at Houston closes us out Monday.

Really this choice came down to either him or Gus Edwards. I choose Lamar based on the fact that I think they will expand the playbook for him more this week. Edwards is not a bad choice at all, but against the Raiders, their defense has no one who can contain the edges to keep Lamar in the pocket. Nor do they have an ILB who they can put on him as a spy.

The Raiders defense is worse than the Bengals and I like LJ to crack 20 fantasy points this week.

QB: Mitchell Trubisky: Two weeks ago when he faced the Lions, Trubisky put up 32 points. Expect a similar outcome again on Thursday. The Lions have allowed 21 points or more to QBs in six of the past seven games. They haven’t got any better since the last meeting.

RB: Marlon Mack: Mack maybe one of the hottest RBs over the past month. Outside of the Jags game, he has posted 13, 28 and 29 points in three of his past four games. In that same stretch, the Dolphins have allowed 26, 18 and 15 points to RBs. This bodes well for Mack, who could finish as a top 10 RB this week.

WR: Jarvis Landry: Landry has seen 7+ targets in all but one game this year and now gets a Cincy defense that has allowed the 2nd most receiving yards. With the offense seeming to come alive since a change at OC and coming off a bye, I expect the Browns to come out firing Sunday.

TE: Jordan Reed: With McCoy starting, look for a heavy dose of Jordan Reed. The Cowboys will stack the box to take out the run game and make McCoy throw. And he will, to his most reliable target. The two connected on a TD Sunday and they have spent the past few years together and have chemistry.

QB: Matt Ryan: Ryan had a huge game against the Saints earlier this year but the Saints defense looks like it is returning to their 2017 form the past two weeks holding QBs to 2 and 8 points respectively. That is not good for Ryan, who N.O. held to 9 and 14 points.

RB: Adrian Peterson: As I said above, the Cowboys will stack the box and make McCoy throw the ball to win the game. Couple that with the chance they could be playing from behind most of the game, and AP will have limited impact.

WR: Nelson Agholor: With Golden Tate coming on board, the Eagles have moved Agholor from the slot to the outside. Agholor is much more affective in the slot and has fallen to the fourth option behind Jeffery, Tate and Ertz. He is nothing more than a WR3/Flex fill-in.

TE: Ben Watson: For as potent as the Saints offense is, Watson seems like an afterthought. Since his 15-point game against the Rams two weeks ago, Watson has scored just one point. Watson cannot be trusted no matter how desperate you are for a TE.

QB: Baker Mayfield: As mentioned above with Landry, I like this offense with Freddie Kitchens calling the plays. Mayfield is a sneaky play this week against a reeling Bengals team who cannot stop anybody.

RB: Theo Riddick: With Johnson nursing a knee injury, Riddick is in line for an extended work load. Riddick has 5 or more receptions in three straight games and could receive a big uptake in rushing attempts as well.

WR: D.J. Moore: It looks like Norv Turner has finally found a way to get Moore involved heavily in the offense. Last week was no fluke, where he saw eight targets. Ride him again against the Seahawks.

TE: Jared Cook: The Ravens somehow just ignore opposing TE’s. They have allowed over 50 catches for over 600 yards this year. And did anyone see how open Uzomah was in the end zone last week?