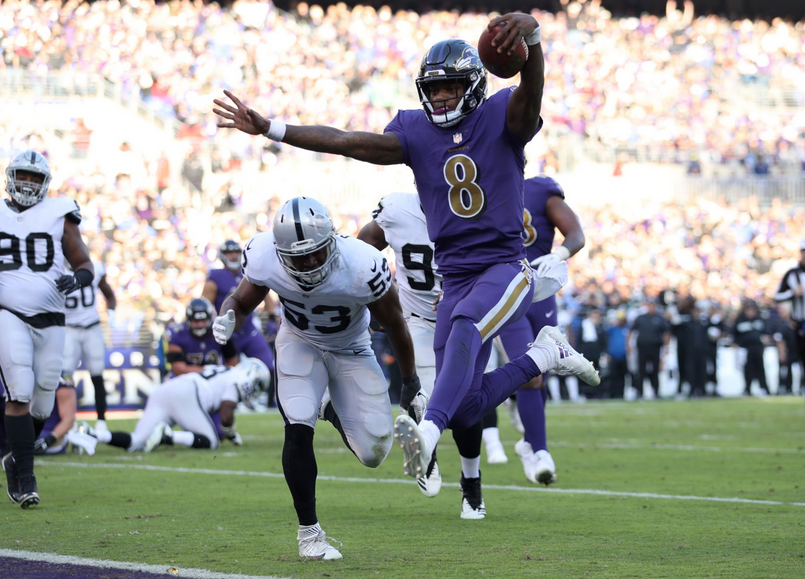 The Ravens beat the Oakland Raiders 34-17 in Week 12 action. RSR staff react to the win here…

I said in our bold predictions that it would take John & Marty a few series of beating their heads against the wall to shape up. As it happened, it took an entire half, and two interceptions, before they decided to let Lamar Jackson and Gus Edwards do what they do best.

During that first half, Lamar learned what Joe Flacco has been forced to learn time and time again during his Baltimore career: if the ball placement isn’t absolutely perfect, nobody on the Ravens is going to catch it. Moreover, there is a 50/50 chance it ends up in the hands of the other team.

In addition to being let down by his pass-catchers, Lamar looked a bit too insistent that he wasn’t going to run the ball when he had the opportunity there in the first half. His indecision, combined with the coaches’ idiocy and the receivers’ stone hands combined to make for an ugly first half. Baltimore’s own Cyrus Jones provided the only spark of the first 30 minutes with his punt return TD.

Once they decided to just do what they do best, detractors be damned, they came out in the second half moving the ball at will. Both on the ground to start, then through the air once the running game was firmly reestablished (those number would have been even better if the long pass to John Brown hadn’t been called back on a hold by Baby Zeus).

It was great to see the defense FINALLY get an turnover, and the fact that it resulted in Terrell Suggs‘ 36-year-old self sprinting to the end zone for a touchdown was really icing on the cake. Now, where the pass rush was for the first three-plus quarters…your guess is as good as mine.

Two bad teams taken care of at home. A winning record again. A schedule that gets decidedly tougher moving forward. And now, a quarterback controversy? We shall see…

At the very least, Lamar needs to get entire drives from here on out. He has not only provided a spark for the offense, he has also significantly helped the defense. The run game is rolling and it’s the threat of Lamar’s runs that’s helping.

Chip Kelly refused to admit the obvious but, time of possession matters in the NFL. Great game plan by the coaches with plenty of passes in the first half to come back and finish up with ground and pound.

This game exemplifies why I will not judge Lamar with this coaching staff. As many pointed out on Twitter during he first half, it was almost as Harbaugh was going to prove a point and have LJ throw for the win. THAT DID NOT WORK!!! The offense was sluggish and ineffective in the first half. The offense got much better in the second half when the Ravens mixed in the run with the pass.

The defense is still worrisome. While holding the Raiders to just 17 points, too many drives were extended and they allowed too many chunk plays. There is no excuse for this if you are the number one defense facing a bottom offense.

While the Ravens enjoy a modest two-game win streak, all of the focus will now turn to who starts a week from now at Atlanta. Do you bench Lamar and start Joe? Do you re-insert Joe? Or do you use a combination? Only time will tell, but what a storyline for the week ahead!

And, oh by the way, did anyone see the Browns/Bengals game today? The last game of the season will not be a cake walk!

The Ravens have found their stride (for the time being). With the Lamar Jackson at the helm, teams don’t know how to approach defending this offense, even with the lack of creativity and complexity. We also learned that Lamar has the ability to make great throws from the pocket. So the notion that he is a “first read, second read, then run” quarterback needs to be put to rest. We saw him go through his progressions with ease and make smart decisions, excluding his first interception.

If this is it for the Harbaugh regime in Baltimore, Eric Decosta needs to focus on finding a coaching staff that can make Lamar better, because he isn’t working with much, but he is making it work.

There is still concern for this defense. The Raiders have a average offensive line, and for the first three quarters of the game, Baltimore didn’t even touch Derek Carr, That wont fly when they play Ryan, Mahomes, Rivers and Mayfield in the remaining critical games of the season. Take this momentum into Atlanta and keep finding out how to use Lamar to win.

It may not be pretty, but winning is the most important thing in this league.

The Ravens finally got splash plays on defense again. The new duo of Lamar Jackson and Gus Edwards chewed 2nd half clock in route to a convincing win. Now the obvious elephant in the room is whether they go back to Joe Flacco if he’s healthy next week. I expect #5 to be at the helm when healthy but Lamar Jackson’s athleticism and ability to make plays has helped awaken a dead running game and gives opposing defensive coordinators more to prepare for than..well, maybe ever in Baltimore.

I hope Harbs is ready to answer QB questions this week.

more knee-jerk reactions as they roll in…