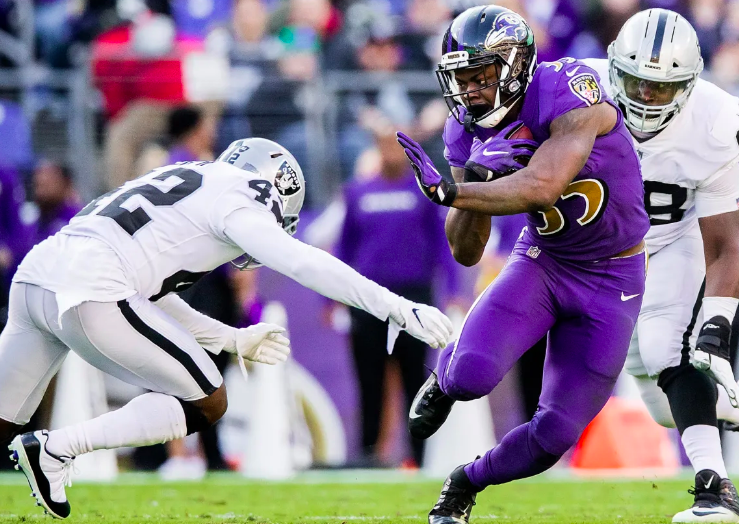 — Leonard Fournette is suspended for the week. Carlos Hyde and T.J. Yeldon will split the carries.

— Melvin Gordon (MCL) is week-to-week. Austin Ekeler will get the start and Justin Jackson will serve as the back-up.

— The following players have been placed on IR and are done for the year: Andy Dalton, Marvin Jones, Jack Doyle, O.J. Howard, and Jeff Heurmann.

— Rex Burkhead was activated off of I.R.

— Jeff Driskell will start in Cincy.

— Blake Bortles has been benched in Jacksonville; Cody Kessler will start.

— New Orleans at Dallas kicks us off on Thursday.

— Washington at Philadelphia closes us out Monday.

Gus Edwards: You have to go Gus here right? Back-to-back 100+ yard games, no threat from any other back to take his snaps, the Falcons have allowed 89 or more yards to RBs in three straight games, and he and Lamar are a dangerous backfield duo.

I’m riding Gus to get me to the fantasy playoffs.

QB: Russell Wilson: Wilson has come on as of late, throwing 9 TDs and just 1 INT over his last four games while averaging 21.5 points. Wilson is a solid QB1 this week against the Niners, who have allowed 21 points to QBs in road games.

RB: Nick Chubb: Since the change in HC and OC, Chubb has produced games of 27, 35, and 15 points while racking up 5 TDs in that span. While some may be scared off of him this week against a stout Texans run defense, it is important to remember that Chubb has been involved in the pass game. That will bode well this week considering the Texans allowed nine receptions to Titans RBs on Monday.

WR: Julian Edelman: Don’t be scared off by the Vikings defense, especially considering the tear Edelman has been on. In his past four games, he has posted 18, 19, 13 and 19 points. The Vikings’ top corner, Xavier Rhodes, is dealing with a hamstring issue and may not be 100% for the game. Edelman should have a big day.

TE: Eric Ebron: Believe it or not, Ebron’s production may increase now that Jack Doyle is done for the year. Ebron is a TE1 this week against the Jags, who have allowed 6 TDs to TEs over the last four games.

QB: Matthew Stafford: How the mighty have fallen. Over the past four games, Stafford has averaged just 10.5 points and in two of those games has thrown 0 TD passes. With the playoffs approaching, Stafford should be placed firmly on your bench.

RB: Ezekiel Elliott: I get you are starting Zeke, but take this into consideration: this will be his third game in exactly two weeks. In those previous two games, he has 61 touches (49 rush 12 rec). That is a crazy amount for this late in the year. Add that with facing the Saints, who have the number one rush defense allowing 73 yards a game, and Zeke will be held in check this week.

WR: Jarvis Landry: The one Browns player who has been hurt by the coaching change: Jarvis Landry. He has just 10 total points (6 and 4) in his last two, and things do not get easier this week against the Texans. With more focus on the run game and the emergence of Antonio Callaway, you just can’t trust Landry.

TE: Kyle Rudolph: Yes, he had a big game last week, but Rudolph’s bread and butter is red zone targets. And that is something he is just not seeing enough of this year. While NE has allowed big games to TEs this year, they have been to more athletic ones (Kelce, Ebron, Burton). You just can’t trust him, especially on the road.

QB: Case Keenum: This is pretty simple. The Bengals defense is horrible, and Keenum is a pretty good QB with play makers in the run and pass game. Keenum should get 250 yards and 3 TDs Sunday.

RB: Frank Gore: Gore has four straight games of 50+ rushing yards. Though he has not found the end zone, that could change this week with Drake nursing a shoulder injury and facing the Bills who have allowed the 6th most fantasy points to RB’s.

WR: Adam Humphries: Humphries as found the end zone in consecutive games, posting 17 and 15 points in those contests. The Panthers have allowed 25 receiving TDs this year and Humphries could make it three straight games.

TE: Austin Hooper: This is simple: play the TE who faces the Ravens. They have allowed a TE to score in four or the past five games. Hooper has seen a ton of volume recently, with three straight games of 5 or more receptions.