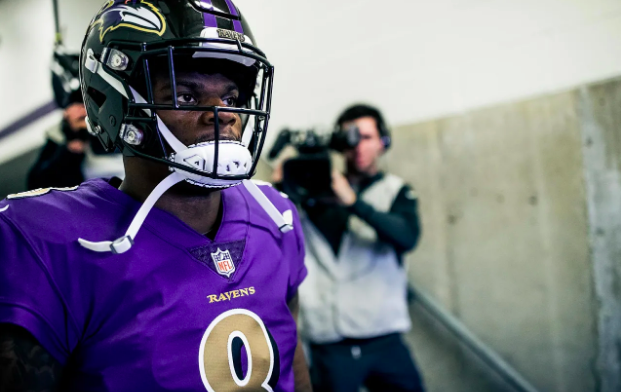 Has this week dragged for anybody else? No? Just me? Okay.

Welcome to another iteration of The Chicken Box, ladies and gentlemen. Every (kinda) Friday, you’ll get a collection of my thoughts, generally related to Baltimore, but sometimes I delve into league-wide things. Occasionally, you’ll even get a Thought Pocket.

Do not speak ill of Lamar Jackson.

Not unless you want a bunch of rabid fanboys jumping down your throat. It’s a lesson that a large part of the Flock has had to learn in recent weeks, myself included.

Here’s something that all fans – not just LJ fans – need to understand.

Pointing out the bad facets of someone’s play does not mean that you hate that player.

If you’re one of those people who cannot handle constructive criticism about the rookie – and if you have to question whether you are, you are – I’d suggest logging off of the internet before you are truly offended.

I enjoy having debates, conversations, and even arguments, to a point. I truly dislike pigheaded foolishness. I encourage everybody to be open-minded when doing the former, and to stay away from the latter. 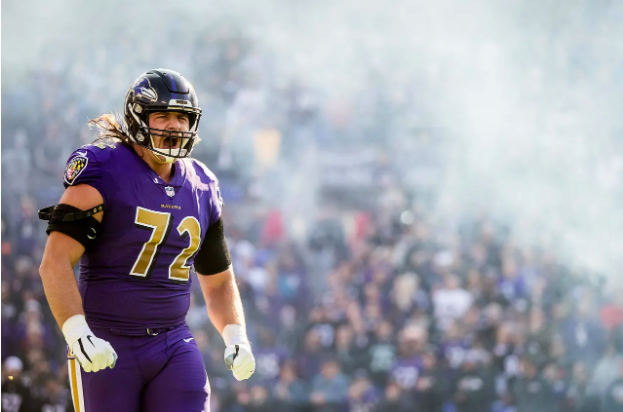 Veteran QB Joe Flacco has practiced for two days straight, after suffering a hip injury before the bye, in the first quarter of the Pittsburgh game. On Friday, HC John Harbaugh said that Flacco ‘made good progress’ this week, and that he’s ‘still an option for Sunday,’ when the Ravens travel to Atlanta to face the 4-7 Falcons.

Contrary to Harbs’ coachspeak, Flacco was walking with a noticeable limp in the part of practice that was open to Baltimore media – a factor that will likely keep him off of the field on Sunday. I would look for him to (maybe) start the following week, instead.

OL James Hurst also returned to practice this week, and has ‘looked good,’ as Harbs put it.  He went on to say that James will not be playing Sunday, but is eyeing a return the following week. Why is this important? Orlando Brown, Jr. isn’t losing his job as the right tackle, which means Alex Lewis probably heads to the bench, and the line gets solidified – assuming James plays as well at guard as he did in 2017. This could be a big boost for both the passing, and running game, heading into a crucial stretch of games that are all ‘must-win.’

Another little tidbit of information that Harbaugh let fly on Friday was that the team was considering bringing oft-injured-suspended-injuredandsuspended RB Kenneth Dixon back. They have/had (depends on when you read this) until 4PM on Saturday to make that move.

As many of you probably already know, I am firmly in the ‘Please Don’t’ camp.

It’s not that I don’t think Dixon has (had?) talent. In fact, I was a bit impressed by his rookie season, when he gained 382 yards on 88 rushes, over 13 games (4.3YPC average). He showed power and speed, broke tackles, and was generally hard to take down.

The problem is this.. Are these.. You get it.

He can’t seem to stay healthy. His rookie season, he missed four games with a knee injury. He missed his entire sophomore season with a torn meniscus and not one, but two suspensions while on IR. More injuries kept him out of a large part of the 2018 preseason, but he managed to fight his way back in – to average 2.87 YPC on 16 carries (he got banged up during those runs, too). KDix was in for Week 1, though, where he led the team in rushing – 13 carries for 44 yards, a 3.4YPC and a score. Oh, and an injury, which caused him to be placed on IR, and miss the majority of the 2018 season.

Do we really want to add him to the roster when the Ravens are already carrying four running backs? When Gus Edwards is producing at a high level? When Alex Collins has a higher season-long YPC than Dixon? When Ty Montgomery isn’t even getting enough snaps?

If it ain’t broke. And right now, it isn’t. The run game has put up 509 yards over the last two weeks (most in the league over that time span, and most in any two-game streak in franchise history).

Don’t try to fix it. 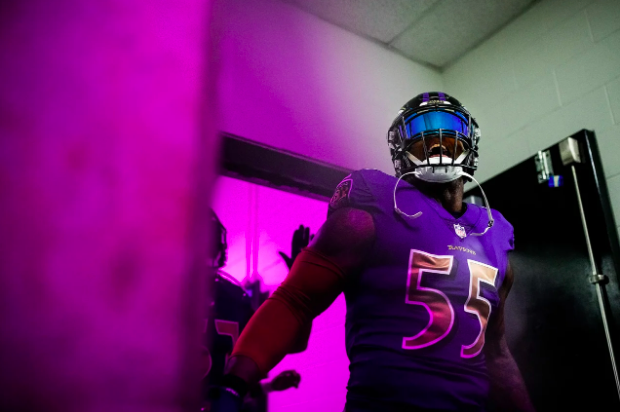 Every time I think Terrell Suggs is done being ‘Sizzle’, he smacks that idea right out of my head.

He referred to reported 4.3-speed Lamar Jackson as being ‘not that fast.’

He claimed to have outrun Lamar, during his scoop-and-score fumble recovery last week.

‘You can ask Sam,’ he said – Sam being Sam Rosengarten, the Ravens analytics guy – ‘I was a little faster than he was last week.’

Don’t jump down Sizzle’s throat for downplaying LJ’s speed, guys. (That’s a callback to the first part of this article, in case you forgot.) 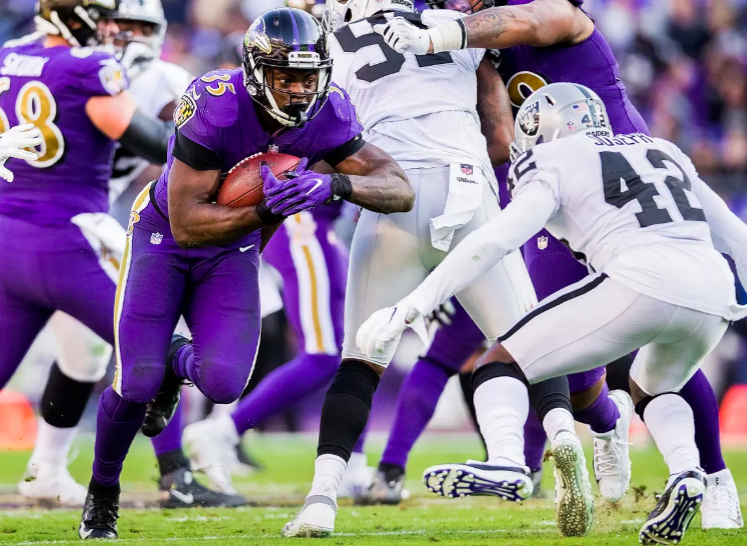 Gus the… not Bus.

While I am also a perpetrator of calling Gus Edwards ‘The Bus’ – let’s face it, it’s an easy jump from Gus, to Bus (related, if you replace the ‘W’ in ‘what’, ‘when’, and ‘where’, with a ‘T’, you get the answer to each question) – I (and by I, I mean my other podcast-half, Adam Bonaccorsi) feel like he needs a new name.

I know some of you won’t make the connection, but there’s a guy, kinda good, named Jerome Bettis. He was a Steeler, and is now a Hall of Famer. His nickname? You guessed it. The Bus.

Do you, as a Ravens fan, want to explain that your rookie RB is also called ‘The Bus’, even though those are huge shoes to fill? I don’t. Adam doesn’t (go read his articles, by the way).

Perhaps we call him G-ED. Because he’s schooling defenders. 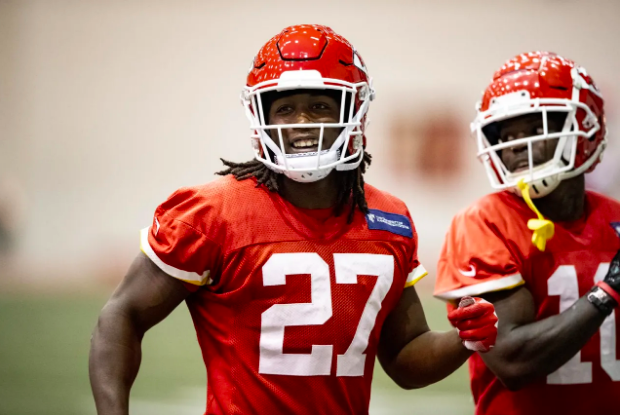 You guys get an extra part today, as a new story has just broken.

Not a great look for the star KC running back, Kareem Hunt. TMZ released a video of the cutback pushing, shoving, hitting, and kicking a woman in a hotel hallway. He was being held back by what appeared to be friends of his, and brought back into the room, but quickly bullied his way back out to attack the woman (and others) further.

It bears keeping an eye on, as the Ravens travel to KC to take on the Chiefs on the 9th, but I would expect (and will be pissed if this doesn’t happen) Hunt to be suspended in short order, at least pending investigation.

I will never understand what motivates a man to throw away millions of dollars and a game they love, just to take out their frustrations on the fairer sex.