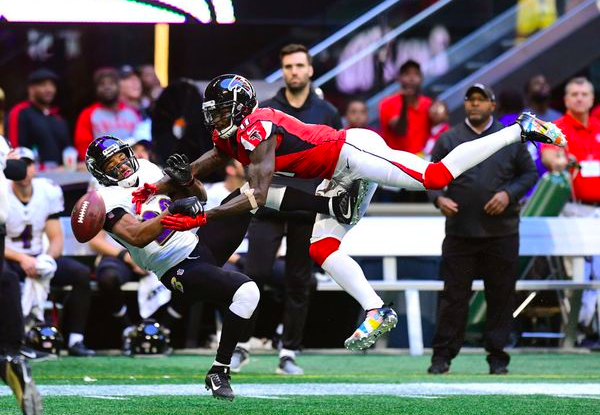 Last Sunday the Ravens faced a 4-7 Falcons team on a three-game losing streak. This supported the narrative I’m sure you’ve heard over the last three weeks that the Ravens are winning because they’re playing bad teams. It’s a fair criticism; the Bengals, Raiders and now Falcons are a combined 11-25. That counts as struggling in my book.

But one thing the Falcons haven’t often struggled to do this year is pass the ball. Don’t believe me? Take a look at these numbers going into Sunday’s game:

That’s not struggling folks. Even after the Ravens limited Ryan to 131 passing yards and one passing TD and Jones to two receptions for 18 yards, the Falcons are still 5th in the NFL in passing yards per game.

So how did the Ravens go into Mercedes-Benz Stadium in Atlanta and shutdown one of the league’s best passing games? Great defense, particularly in the secondary. Every guy back there made plays on Sunday but I want to focus on Marlon Humphrey and how he won with athleticism and technique.

The Falcons do a nice job creating a window for Calvin Ridley’s slant route on this 3rd & 9 in the high red zone. Ridley is aligned in a plus split outside the numbers on the left side of the formation. TE Austin Hooper is in-line on the same side and RB Ito Smith is in the backfield offset to Ryan’s left.

At the snap, Hooper releases vertically but bends his route slightly towards to the middle of the field, occupying the hook/curl defender (more on whom this was in a minute). Smith runs to the left flat drawing coverage from FS Eric Weddle who dropped down to the line of scrimmage late to show rush. The routes by Hooper and Smith create space for Ridley’s slant route and a classic west coast offense triangle read (Google “WCO triangle read” and enjoy).

I don’t think Humphrey was officially credited with a pass break-up (pbu) on this play, but I’m giving him one. Ryan throws the ball behind Ridley but Humphrey makes sure he isn’t able to reach back and make the catch.

Did you see Michael Pierce dropping into coverage in the hook/curl zone? Ryan’s ball placement may have actually saved Ridley from a huge collision with a 340-lb defensive tackle.

Jones aligns in a tight split on the right side of the formation, a few yards outside Hooper. The Falcons want to create a 1-on-1 matchup for Jones outside and use a combination of formation and play-action to do it. They start by shifting RB Smith from a wide alignment on the right side into the backfield. This created the potential for three receivers (Jones, Hooper & Smith) to run pass routes from the right side and made WLB Patrick Onwuasor and S Chuck Clark responsible for covering Smith and Hooper.

At the snap, Ryan fakes a handoff to Smith, forcing Onwuasor and Clark to react to a possible run. Weddle was playing the deep ⅓ but was shaded to the two-receiver side on the left. All this action results in the Falcons getting the 1-on-1 match-up for Jones they wanted.

Although Humphrey essentially has no help on Jones because of how much field Weddle has to cover, Marlon is up to the challenge. I really like how patient Humphrey is with his technique. Jones releases outside and initially gains a step but Humphrey works to a cut-off position, then looks back for the ball.

Humphrey locates the ball as it arrives, elevates and use his length to knock it away.

The Falcons are in a shotgun 3×1 set. Let’s focus on the three-receiver side on the right-side of the formation. Sanu, Hooper and Ridley are in a trips bunch look. When receivers are bunched this closely together, it tells the coverage defenders to be alert for a pick concept.

Humphrey uses what some call a half-turn or shuffle technique as he drops back. This is a technique that University of Alabama Head Coach Nick Saban has taught his DBs for years. It allows the DB to see through the receivers in his area to the QB. Saban believes the half-turn also enables the DB to react more quickly to certain kinds of route breaks than the backpedal technique. His argument is that when a DB backpedals they either have to unlock or flip their hips to run with a vertical route or use extra steps to change their momentum, going from backwards to forwards, to break on an underneath route.

Watch CB Brandon Carr, who appears to be dropping to the deep ½ on the right, to see what a backpedal looks like.

Humphrey plays close enough to Sanu’s flat route that Ryan decides to throw the corner to Ridley. Humphrey’s half-turn technique allowed him to see into the backfield, so he was able to get depth and sink under the throw. Ryan throws an accurate ball and Ridley initially makes the catch but Humphrey is able to punch the ball loose. This is something Humphrey has done consistently over the course of this season that I absolutely love to see from a DB. He doesn’t concede catches and finishes plays.

Even if a receiver makes a catch, Marlon is always looking to get the ball out.

Happy I was Wrong

I’ll be honest: during the 2017 NFL draft I was one of those fans wondering why the Ravens took a CB 16th overall. They had three solid CBs in Smith, Carr, and Tavon Young (the draft occured before Young’s injury that caused him to miss all of 2017). I didn’t question Humphrey as a player, as I actually thought he was one of the better CBs in the 2017 class. But I didn’t see the need and thought there was more value in addressing other positions.

But like so many times in my life, I was wrong and boy am I happy about that.

Through his first two seasons, Humphrey looks every bit the part of a #1 NFL corner.