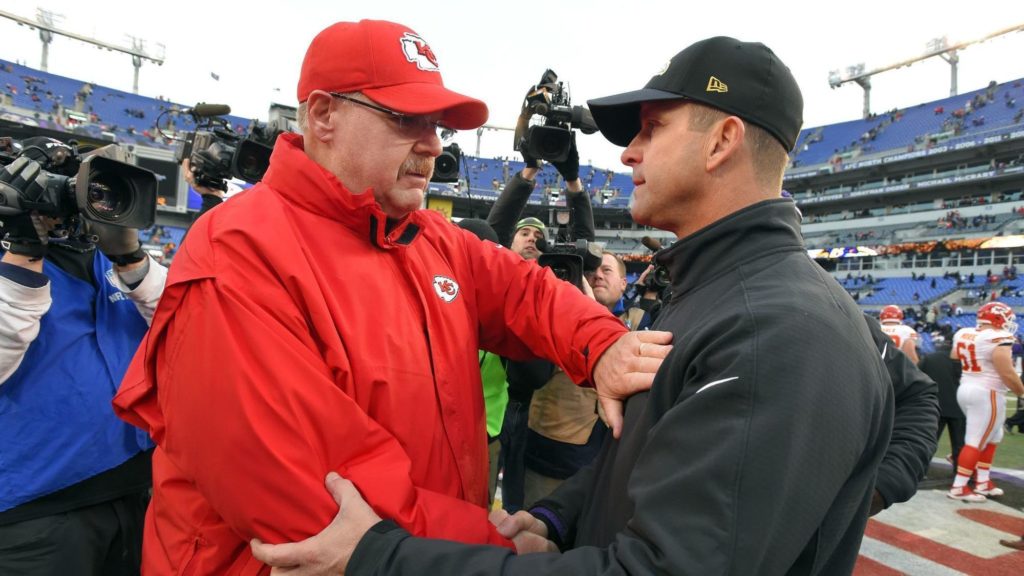 Kansas City Chiefs coach Andy Reid should be well-prepared for the Baltimore Ravens.

Ravens fans are well aware that coach John Harbaugh was an assistant under Reid in Philadelphia. In addition, Marty Mornhinweg was the offensive coordinator for Reid with the Eagles.

Reid coached Donovan McNabb and Michael Vick, a pair of dual-threat quarterbacks whose style of play is reminiscent of Lamar Jackson.

So, when the teams kick off Sunday, Reid will have a lot of familiarity with his opponent, despite some uncertainty with the Ravens starting quarterback.

“I would tell you, first of all, they’re blessed to have two really good quarterbacks – well, really three – but the two that are playing and have played together, and that’s a unique combination,” Reid said. “Sure, Lamar, he gives you … He can run like a running back, he’s as fast as a wide receiver, and he can throw like a son of a gun, like a quarterback, so that’s a pretty good combination to have. He’s a talented kid, and so is the other guy. [Joe] Flacco is a talented one. That’s a good situation right there that Marty  has – and John.”

Flacco was limited in practice Wednesday and still has to be cleared by doctors to play in a game. As a result, Jackson is poised to make his fourth straight start.

The rookie’s confidence has grown each game.

Jackson has led the Ravens to three straight victories with a grinding offense that keeps the opposing offenses off the field and his defense fresh late in the game.

That strategy will be especially critical against the Chiefs, who lead the NFL scoring 37 points per game.

The Ravens have run for more than 200 yards in each of the last three games. They will pound the ball against Kansas City’s defense that allows 122 yards rushing per game, ranked 22nd in the NFL.

In addition to Jackson, Baltimore will rely heavily on running back Gus Edwards, who had two consecutive 100-yard performances before finishing with 82 yards on 21 carries against the Falcons. Edwards has taken over the starting job for Alex Collins, who was placed on IR with an injured foot.

“Guys are rooting each other on, we’re working hard, trying to compete,” Edwards said. “I think we’re doing a good job at just getting along and also helping each other get better.”

This is by far the toughest opponent Jackson has ever faced. In addition to the Chiefs’ talented roster, Jackson is also going to have to deal with other challenges, such as the cold weather and the crowd noise at Arrowhead Stadium.

However, he does not appear the least bit intimidated. He dealt with cold-weather games in college at Louisville, but not to this degree.

“It’s been cold, but not as cold as it is in Baltimore right now. I can imagine how Kansas City is going to be, so I have to get prepared,” Jackson said. “Once the ball is kicked off, we’re out there on the field, and you get warm. We’re good.”

As far as the crowd noise, he said: “Those guys might have to read my lips sometimes. I heard Kansas City will be very loud. I’m going to have to do my job, probably try to speak up as much as I could to those guys. [It’ll be a] team effort in the huddle.”

The Ravens are 3-0, including the playoffs, at Arrowhead Stadium. Two of those victories have come under Harbaugh.