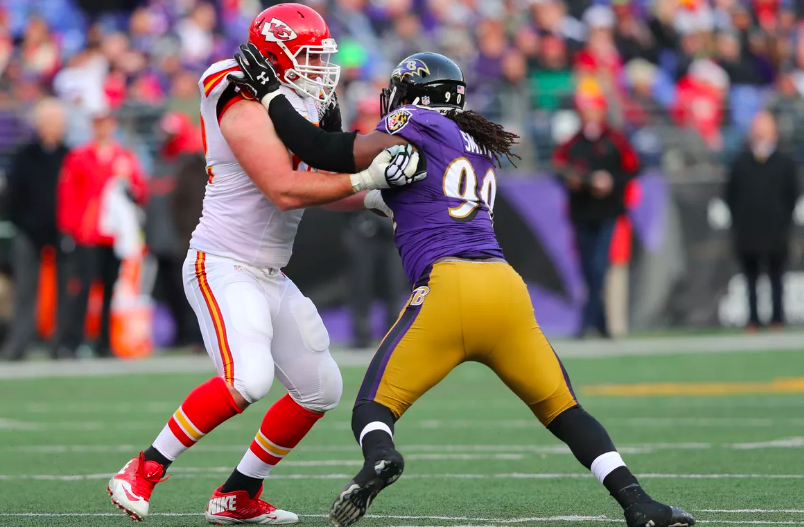 The Baltimore Ravens are 3-0 in their history at Arrowhead stadium, including a playoff win in January 2010 and a regular-season win in 2012 under John Harbaugh. Can they keep that streak alive against the red-hot Chiefs in Week 14?

— The Ravens’ ball-control offense will be imperative to beat the Chiefs. Baltimore is simply not built to play from behind against an offense of this caliber. Kansas City is averaging 37 points per game, but has the league’s 31st-ranked defense.

— The biggest challenge facing the Ravens is shutting down Travis Kelce. Baltimore has struggled all season to cover tight ends. Look for Don Martindale to treat Kelce like a receiver and assign Jimmy Smith to match up with him. The Ravens could be in trouble if Marlon Humphrey (groin) is unable to play.

— Lamar Jackson will have the usual jitters with a big game in a hostile environment. The Chiefs will look to aggressively attack the rookie and force a couple of turnovers as did the Raiders and Falcons.

— The Ravens will hang tough, but they ultimately don’t have the firepower to match the Chiefs in Arrowhead Stadium. Final Score:

The Ravens defense was a force last weekend. They were aggressive, they made Matt Ryan uncomfortable all day and they forced turnovers and put up points. To win this game at Arrowhead they’ll need to do it again this Sunday. Because as much as I like Lamar Jackson, he’s not keeping up with Patrick Mahomes.

Mahomes has shown he can get frazzled and make mistakes that cost his team. His game a couple weeks back against the Rams is proof of that. He threw three costly picks and has ten on the season.

Even with all that said I have a hard time seeing the Ravens pulling off the upset. You won’t beat the Chiefs kicking field goals and even with a three-game winning streak, the Ravens offense has struggled to finish drives.

In today’s NFL, where defenses have been neutered to the point where most don’t even really try any more, the Ravens continue to go against the grain. The Chiefs score a lot, right? Well, take a gander at this:

Look at the second team on that list – Dallas. Now think back to what they did against the New Orleans Saints a couple weeks back. My point? Defenses that aren’t afraid to smack you in the mouth can still shut down these newfangled high-powered offenses.

Let’s say the Ravens do their usual and hold KC to 30.5% below their season average. 69.5 (nice) percent of 37 per game is 25.7. Coincidentally, the Ravens scored exactly 26 points last week. In Lamar Jackson’s three starts, they are averaging exactly 28 points per game. (Yes, I realize the defense and special teams have contributed mightily).

Wink’s group harasses Mahomes into two turnovers, including yet another for a score – this one a pick six c/o Marlon Humphrey, who is thankfully, on the field.

Jackson makes a couple more throws like the teardrops to Mark Andrews and John Brown against Oakland, and fewer like the egregious miss to Brown last week.

Ravens shock the NFL, and the AFC is suddenly on notice that the Baltimore Bullies are back.

In a battle of the best defense in football versus one of the best offenses in football, one will have to break. In Sunday’s case, it will be the defense, and it might get ugly. Kansas city is loaded on offense, even without Kareem Hunt. Tyreek Hill is the best weapon in football, no one on Baltimore’s defense can match up with him, and they will have an even greater struggle versus Travis Kelce.

Patrick Mahomes will throw for 300+ yards and three scores, as the defense might rattle him early, but will lose the war.

The Lamar Jackson hype train will roll into Kansas city, and even though he will continue to improve as a passer, it wont be enough against Mahomes on the other side. Even though the Kansas City defense is atrocious at times, Lamar still wont be able to hurt them with his arm. Teams are going to force him to win with his arm and we are going to see some really poor throws. He will throw for around 180 yards, and one score, along with two interceptions.

Gus Edwards will have another solid day, hovering around 110 yards and a trip to the end zone. The teacher will outsmart the student, as Andy Reid‘s Chiefs will win this overhyped fight to maintain the 1 seed in the AFC.

If I would have said the Ravens will beat the Chiefs a month ago it would’ve been an extremely bold prediction. Even now it’s pretty bold – but plausible. The Ravens and the Chiefs make for a very interesting matchup that fans are very excited about.

After the defensive performance against the Falcons, I’m feeling pretty good about their chances of slowing down the Chiefs offense. With Kareem Hunt gone, the run game for the Chiefs slowed down last week against the Raiders. I expect Wink Martindale to throw every confusing blitz he has in the book at Patrick Mahomes to rattle him early on.

As for the Chiefs, I think they will look to stick to a short passing game early on in place of a running game. Knowing that the Ravens will likely control the clock, they will attempt to control it their way with a quick passing game. Covering tight ends and running backs matched up on the Ravens linebackers has been a major weakness all season. I also expect a heavy dose of dime and nickel packages with Travis Kelce being treated as a wide receiver. Of course, the Chiefs will put up points – just not as many as they normally do.

It’s no secret what the Ravens will look to do in this game. They will run the ball then they will run it some more and then just a little more. They will play a game of keep away and the Chiefs will have a hard time stopping it just as teams have in the last three weeks. Lamar will make his share of mistakes – let’s just hope they are limited.

With the Ravens dominating the time of possession they way they have since Lamar took over it doesn’t allow teams to get enough opportunities to score.

Let me start off by giving my two cents about the Lamar Jackson vs. Joe Flacco debate. In an ideal situation, Flacco is the better option here. However, this offensive line has not played well at all which makes Jackson’s skillset the better choice to start going forward as it can mask some of the deficiencies along the line. Plus, I think the only way the Ravens beat the Chiefs is if they can control the ball as they did last week in Atlanta.

Now, with all that said, I don’t see the Ravens even covering here in Week 14. Jackson struggled in his first road start and that was in a half-empty stadium. Arrowhead will be extremely loud and it’ll be interesting to see how he handles the noise.

I think the Ravens will limit the Chiefs’ offense better than anyone has, but I don’t think they’ll score enough to keep up.