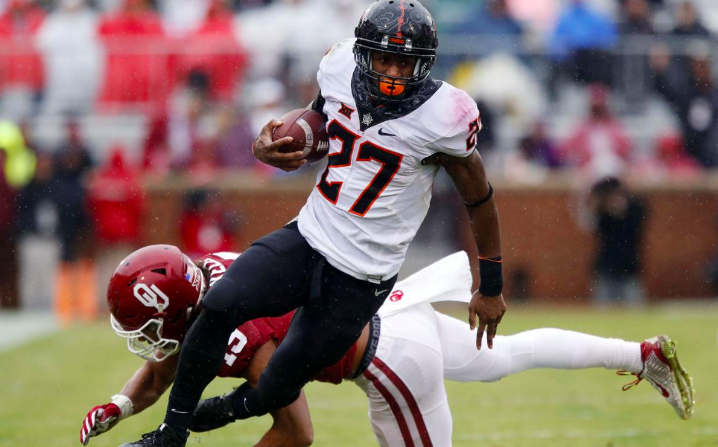 Eric DeCosta continues to knock this draft out of the park. Justice Hill is the home run-hitting running back John Harbaugh wanted, Ben Powers can start at left guard from day one, and Iman Marshall is a versatile piece of the secondary for the future.

I’d wager that most of these players will be making an impact right away. There’s little to be upset about in this round.

Just when you thought EDC couldn’t do better the the third round, he says ‘Hold my beer’!

Justice Hill is that big-play RB the Ravens have lacked since Ray Rice. Every time the ball is in his hands, he has a chance to take it to the house. Love the pick – this offense will be like a track team.

Ben Powers says he loves crushing grown mens’ dreams…what’s not to love about that?! An instant starter next to Zeus solidifies and continues the youth movement along the O-line.

That is now three OU picks so far to go along with the two last year. I guess we can assume if DeCosta cuts loose Harbs, Lincoln Riley is the heir apparent ( I joke…I wish…maybe somewhere in between).

Iman Marshall: in fairness, I know nothing about him. But you can never have too many CB, given that Jimmy Smith is in a contract year and Brandon Carr is getting up in age.

The only surprise to me is they went CB over ILB, with Mack Wilson and Ben Burr-Kirven still on the board.

— This draft has been all about speed and Justice Hill provides another weapon out of the backfield. While his receptions were down last season, he is capable of catching the ball and making plays: “The idea of adding speed with Lamar [Jackson] is exciting to think about,” Ravens director of college scouting Joe Hortiz said about the addition of Marquise Brown, Miles Boykin and Hill.

— Ben Powers became the 11th Oklahoma player drafted by the Ravens, tying Alabama for most players taken in franchise history. Powers is a brawler who will compete for a starting spot at left guard. With a run-focused offense, he is a perfect fit.

— The Ravens have depth in the secondary but Iman Marshall was the best player available on their board. Marshall will be the team’s biggest cornerback at 6-foot-4, 210 pounds and can also play special teams.

Justice Hill stays with the theme of speed to make a scary offense that caters to Lamar Jackson. Defensive coordinators are going to have a much tougher time game planning with this new look offense. Of course, it all needs to be put together, but on paper, this is an explosive offense and Hill was the most explosive running back in this draft class. He was the exact type of back need to complement the power backs on the roster.

Powers makes another Oklahoma player added to the roster and a good one that fills a need. Another really cool story was Orlando Brown was at Powers’ house for his draft party when the Ravens made the call and is one of his best friends. I think that makes the acclimation easier to the NFL for these players with some added comfort of people they have already played football with. Add in that Mo Gaba made the announcement and this pick was a feel-good story all the way around.

Iman Marshall was another Senior Bowl standout, a game from which the Ravens regularly draft quality players almost every year. Marshall is a big, physical, versatile corner with ball skills that won’t be expected to play right away on defense but can develop behind Jimmy Smith and Brandon Carr. He can earn his wings on special teams his rookie year and his role can expand in due time.

Like DeCosta said yesterday, day three can make or break a draft class.

Baltimore gets pieces that can be integrated into their current roster and contribute early while also developing their skills. Ben Powers was the best pick of round four for my money. Excellent pass blocker who can improve as a run blocker, which won’t be hard considering Greg Roman has had success with guys with a similar skill set. Iman Marshall has the potential to be a key special teams player and learn as the season goes on and possibly even take over for Brandon Carr as his career comes to a close.

Justice Hill was a good value pick, but I think it was a round early. His speed will complement the power style of Edwards and Ingram, and he can win both outside and inside as a runner, similar to Jamaal Charles. I would have liked an inside linebacker or another pass rusher , but it was a good round that will add depth to this roster.

Ravens being very intentional with their skill position selection. They are building a team that can excel in the open field.

That trend continued with the selection of Justice Hill. He’s a terrific fit in the outside zone and off tackle run game and has some untapped potential as a pass catcher.

Ben Powers is a sound and physical player who will join the mix at LG. Love his mentality as a blocker and while not overly athletic, he moves just well enough to complete the assignments in Roman’s varied run scheme.

Iman Marshall was a bit of a surprise pick. Then again, the Ravens seem determined to be overly prepared at corner. With Jimmy Smith in a contract year and Brandon Carr on an option this pick points an eye towards the future.

The theme of the day (and the whole draft, for that matter) was acquiring speedy playmakers on offense who can reduce Lamar’s run workload.

Justice Hill: He’s another small, but very fast playmaker who should provide an alternative to Lamar Jackson as an outside threat to complement what Edwards and Ingram can do. To be most effective, he’d be on the field at the same time as Ingram or Edwards, so we may see him lining up as a flanker in motion to freeze edge defenders as Jackson did last season. Based on his size and projection of his pass blocking to the NFL, I don’t see him as an ideal 3rd-down back.

Ben Powers: He was off my radar, but I saw Joe Hortiz say they really liked all 3 of their 4th round guys (read: red stars).  owers has an apparent nasty attitude, but is often cited in scouting reports as lacking athleticism/mobility. I look forward to scoring a game he played against NFL competition.

Iman Marshal: Iman is one of the big corners in this class at 6’ 207. He’ll play on the outside for the Ravens. Smith (FA after 2019) and Carr (FA after 2020) are both older, so it’s important not only to plan to replace them, but to restart the 4-year clock with a quality prospect to replace a player like Canady, who has played well at times, but is entering the final year of his rookie deal. Marshall, like Averett, is a mid-tier prospect who the Ravens must have liked to pick when they did given the team’s other needs.