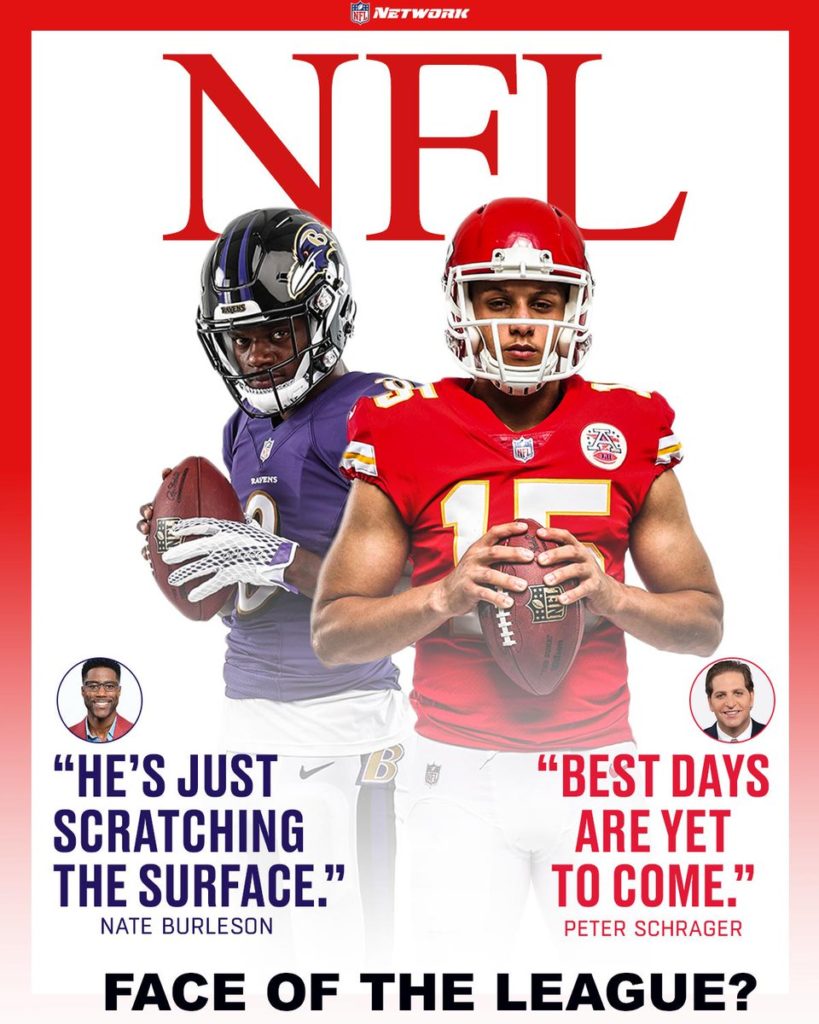 The hype around Lamar Jackson is already building in just his second season as the Ravens quarterback.

A recent NFL Network promotion asked whether he and Patrick MaHomes are “The Face of the League?”

Entering his third year, Mahomes has already established himself among the upper echelon of NFL quarterbacks. He became the first Kansas City Chiefs player to be named the Most Valuable Player of the league when he threw for 5,097 yards within 50 touchdowns and just 12 interceptions (113.8 passer rating) last season.

Jackson still has some work ahead of him to become as adept at passing as Mahones. However, Jackson is a dynamic playmaker who can break open a big play at any moment.

The Ravens are sold on Jackson’s athleticism and are building the offense around him. They signed veteran running back Mark Ingram to provide more support in the backfield and drafted Justice Hill from Oklahoma State in the fourth round to provide another breakaway threat.

Baltimore also drafted a pair of speedy receivers — Hollywood Brown and Miles Boykin — to grow with Jackson in this new era of offense.

Those new players already have a sense of their new role in the offense.

“I think first and foremost, the biggest thing for me is just going out there and being physical in the run game,” Boykin said. “Obviously, Lamar is going to run the ball a bit. We have good running backs, and being physical in the run game sets up everything else, from play-action pass, to easy release off the line in press coverage. So, I think my No. 1 goal is to go out there and be physical every time.”

Jackson still has many detractors about his ability to develop as an efficient pocket passer. However, he is unfazed by the criticism and is even motivated by the outside noise.

“He thrives off of competition and the doubters,” his personal quarterback coach Joshua Harris said. “People saying he can’t do something, he locks in like I have never seen anybody.”

The Ravens have been impressed by Jackson’s work ethic this offseason. He spent much of the time working out with Harris and several receivers, such as Jordan Lasley, in Florida.

By most accounts, that extra work is paying off.

The national media is already on board with Jackson having another dynamic season.

“Did you know that Lamar can run the football a little bit?” Adam Rank, of the NFL.com, wrote in a recent analysis of the league . “Oh, that’s right, the internet is full of memes exaggerating this aspect of his game. But Jackson can indeed run the ball (556 rushing yards in his seven starts last season, or 79 yards per start) and throw it. So he’s going to have a monster season this year, and I’m here for it.”

Ravens GM Eric DeCosta is also confident the team has surrounded Jackson with enough weapons to keep teams on their heels. The new additions and continued development of Jackson should translate into a big-play offense.

The team just needs to execute.

No player will be more scrutinized than Jackson this offseason.

“As good as our defense has been, it’s a challenge for a team to face speed when you have multiple guys on the field at the same time who can run and make explosive plays,” DeCosta said. “We got a chance to see what Lamar can do this past year, and I think our vision, collective vision, for the offense is to add more guys like that to make it really challenging on the defense.”