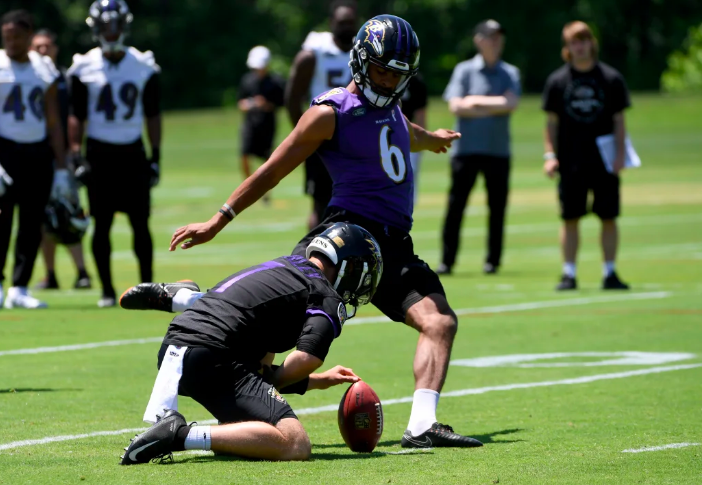 I know, I know… this ain’t my first rodeo when it comes to stanning Kaare Vedvik, but it’s been close to a year since I declared my allegiance to Vedvik, and since the conversation is recycling itself, I figured it’s time to address my stance once again.

I’m ready to move on from Sam Koch and keep Kaare Vedvik as the Ravens punter for the next decade-plus.

Yes, I know Sam is a key member of the Wolf Pack, and the best punter in the entire NFL…

Is it possible that Ravens fans are simply seeing Koch as much more than the fan favorite that he is? Surely, we want our ‘lifer’ Ravens to never leave, but as we’ve seen with Joe Flacco now in Denver, when production starts to fall off, perhaps it’s time to consider moving on to greener pastures…

Back to Koch’s stats, and how he compares to his peers, here’s a quick look at the 2018 NFL season from a punting standpoint for the Ravens:

All in all, the numbers don’t really point to a punter that’s as top-notch as we all expected. Yes, I grasp that this takes into consideration the coverage aspect as well on the punt unit, but generally speaking, the touchbacks, punts inside the 20, and ability to hang a punt for a fair catch are all indicative of the punter more than the unit.

This isn’t to say Sam Koch is no longer good – simply that he’s slowly falling out of the top-punters-in-the-league conversation, and turning into a solid punter in that 10-15 range in the NFL. Couple that with Koch’s age (he turns 37 in August), and contract ($3.95M in 2019, the third highest-paid punter) and I can see justification for moving on from the veteran punter in favor of Kaare Vedvik.

As we dig into Vedvik, I’d like to start with a quick point on the Marshall product: he’s a punter first, and a kicker second.

In fact, going back to Vedvik’s college career at Marshall, he had more than twice as many punts (129) as he did Extra Point attempts (42) and Field Goal attempts (16) combined.

But that doesn’t mean he’s not resourceful when it comes to backing up the kicker. In fact, if a team has a reassurance that their punter can spot kick in the event their primary kicker cannot, that’s just an added bonus – something the Ravens should appreciate, as Koch has never attempted a field goal or extra point in his college or pro career, to date.

Beyond that ability in the kicking game, what else does Vedik bring to the table that Koch doesn’t?

By swapping to Vedvik ($550k in 2019, $660k in 2020), the Ravens save $3M each year, respectively, that can be allocated to… well, name a need: Matt Judon’s new deal, Michael Pierce‘s new deal (or his Weight Watchers classes), adding another weapon on the offense, signing any number of veteran studs in a splashy 2020 free agent class…

Kinda understanding where I’m coming from yet?

I know the ‘yea but can he hold?’ crowd is floating around out there, given Koch’s ability to hold without a botched snap for guys like Tucker, Steven Hauschka, Matt Stover (Shayne Graham and Billy Cundiff too, but gross). I’d love to definitively say that yes, Vedvik is awesome at that too. Quite simply, I can’t confirm or deny his skill there. I’d simply point out that doing both the punting and kicking at Marshall didn’t present the opportunity and I’m sure it’s something being worked on in camp to see where he is with that.

Okay, here’s just one more point: if you truly value Koch this highly, then other teams in dire need of a punter may as well. If there’s a playoff contender that truly lacks a good punter (Chargers, Texans, Cowboys), perhaps they’d be willing to shell out a little more for Koch than they would for Vedvik.

Maybe Vedvik nets a 7th as a punter (fun fact – 41/42 extra points in college, but only 62.5% FG, which is showing in minicamp thus far in 2019), but Koch can possibly get you a 6th… maybe a conditional 5th? I know it seems marginal, maybe even downright silly, but a full round earlier is valuable when it comes to a great draft class, as we expect to see in 2020.

I love the Wolf Pack, and I love what Sam Koch has done for the franchise. I appreciate his 69 passing yards (nice), and his 100% completion percentage. He’s a treasure in the eyes of Ravens fans.

But eventually, we have to face the facts, and this middling punting unit could use a refresh, while helping the team save some cap space along the way. A fresh-faced Kaare Vedvik could be just what the doctor ordered on special teams.