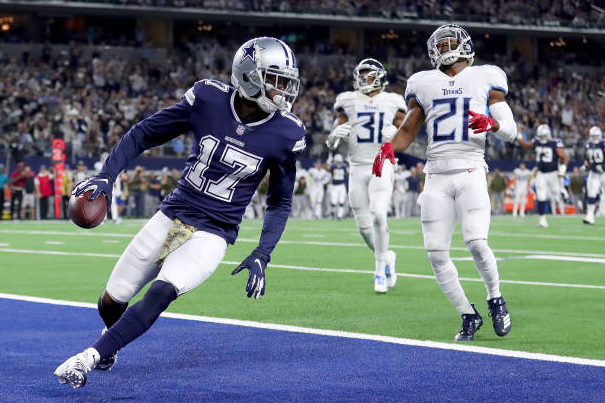 I feel like we do this entirely too often, but here we go again…

Yesterday the Dallas Cowboys released wide receiver Allen Hurns and naturally, a smattering of Ravens fans did we they always do in the dog days of the NFL calendar:

Folks, I get that the Ravens have little-to-no proven talent at the wideout position, but that’s not enough to justify signing Hurns.

Let’s take a quick look at Hurns on the stat sheet, courtesy of Pro-Football Reference:

So a couple things here to consider. First and foremost, I see a player that hasn’t broken the 500-yard plateau since 2015 – four years ago – and has only done it once. Still, I grasp that you don’t need to be a thousand-yard receiver on this roster to make a difference, but why bother with another player averaging in the high 300-yard range the past three years when you already signed Seth Roberts who eclipsed Hurns’ 2018 stat sheet, and was within 40 yards of Hurns in 2017?

The other thing I see here is health concerns, as Hurns has been victim to multiple injuries throughout his career. His latest, a broken ankle, occurred in the 2018 playoffs versus the Seahawks, just six months back (and if you didn’t see how gruesome it was, YouTube exists for a reason).

So tell me: where does a 28 year old, injury prone, WR3 fit into this roster?

Let’s assume the Ravens follow suit from recent seasons and keep six receivers: I look at Miles Boykin, Hollywood Brown, and Willie Snead as locks. Most (not me) would say Chris Moore is also a lock, and as we just discussed, Roberts provides more offensively than Hurns, so no sense in cutting him and losing a cool million bucks to have a player with worse offensive stats.

That covers five of the possible six spots, leaving one for Hurns.

Do you value the potential that Hurns can find his 2015 self four years later over the potential of a Jaleel Scott resurgence following his IR stint in his 2018 rookie year? Do you risk an injury-prone Hurns on the 53 over sure-handed UDFA Antone Wesley? What about the potential of Jordan Lasley? Or my pick for ‘sneaky good wideout that we’ll talk about all August’ Sean Modster? After all, Hurns is no longer a starter (we can see that in the above stat sheet, starting only seven of 16 games in Dallas) and by adding him, you’d be ousting potential and growth of a young buck in favor of a has-been.

Really, that last sentiment is what it ultimately it boils down to for me: how much more production do you get from adding Hurns, as he takes snaps away from the young bucks on the roster and pushes them further down the pecking order – a long-time reality that Ravens fans as a whole have lamented as we chant ‘let the kids play!’ every damn year?

The idea of adding Hurns seems entirely counterproductive to the ideology we’ve preached in regards to this offense, and I simply cannot stand the idea of adding another washed, injury-prone player to the roster while we suffer through another year of benching the youth and stifling their development.

Let another team take a flier on Hurns.