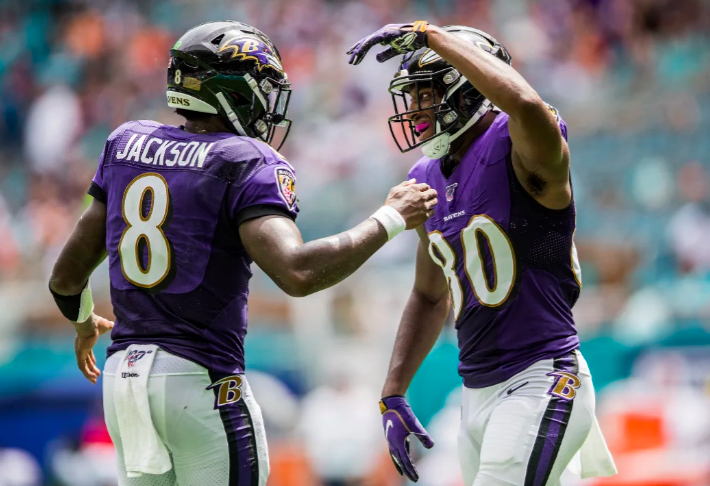 Happy Wednesday Ravens fans! I don’t think the Ravens offense could have given us a better show for the debut of The Coordinators.

That said, the game script makes it a little difficult to get a real sense of the Ravens tendencies to kick off the 2019 season.

We’re going to take a look at both the run and pass game from Sundays 59-10 shellacking of the Miami Dolphins, and you can find us here twice a week (run game and pass game editions) for your weekly recap.

The hot topic of the 2019 offseason was the promotion of Greg Roman to Offensive Coordinator and the news that the team would be revamping the offense “from the ground up.” While this may have mostly referred to the naming conventions of formations and the terminology of the offensive system, it still would have come with a new approach to the pass game design.

With that move at the OC position, also comes with a new approach to the play calling, which was a complaint of many Ravens fans during Marty Mornhinweg’s entire tenure in Baltimore.

Week 1 produced 27 pass plays (26 attempts + 1 sack) and 46 run plays. This split was more in-line with the 2018 season once Lamar Jackson took over at quarterback.

On the surface, it doesn’t seem like an improvement. However, obviously the game script of a blowout, and being ahead 42-10 at half time, plays a major role in the play calling.

If we look at the Ravens’ first 4 offensive drives that resulted in a 28-0 lead, we can see a more balanced approach with 11 runs to 7 passes:

The Ravens offensive attack is still going to feature a strong running game, but the balance to utilize the passing attack is going to be essential to giving opposing Defensive Coordinators a headache.

In fact, the Ravens utilized that strong run game to aid their pass game on Sunday. The Ravens utilized play action on 12/26 pass plays (46%). This is a trend to keep an eye on as Greg Roman moves his chess pieces around the board.

Of course Robert Griffin III did play 2 drives (23 offensive snaps), but we’ve all been waiting since January to see Lamar Jackson in a regular season football game, so we’re going to take a closer look at him today.

First off, let’s take a quick look at Lamar’s passing zones from the 2018 season, courtesy of NFL Next Gen Stats 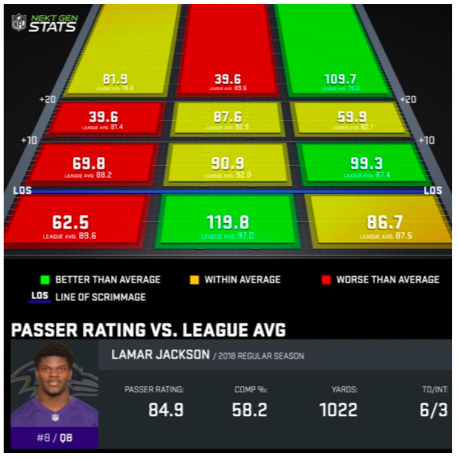 This paints an interesting story for 2018. Lamar was much better throwing to his right than his left and the middle/right short-to-intermediate was more of his comfort zone. So how did Sunday look broken down by zones? 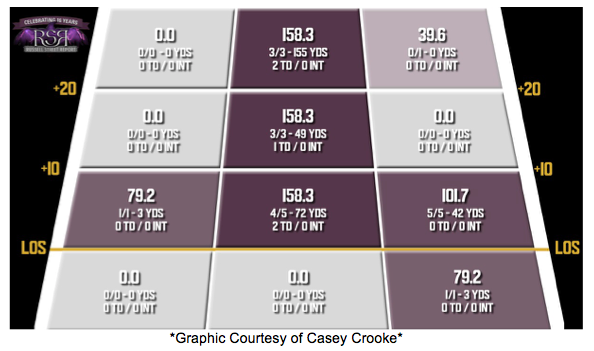 Of course, it’s going to be a hard comparison given that Lamar had a perfect passer rating on the day, but it is still interesting to note that he only had 1 attempt to the left side of the field that was a competition for 3 yards to Marquise Brown on a drag route.

The last piece to highlight is that, compared to last year he still has some comfort throwing to the short right side where he was 5/5 for 42 yards.

It’s obviously too early to draw conclusions and this data isn’t evidence supporting the ‘Lamar can’t throw to his right’, but it is going to be interesting to track as we get more data.

And before we move on, let’s give a big shout out to Robert Griffin III. Yes, it was garbage time, but the man has been the ultimate teammate on the Ravens and it was great to see him shine with a 6/6 55 yards, 1 TD stat line.

Targets, Receptions and YAC, OH MY!

Again, with the insanely successful output from the Ravens passing game it’s hard to gleam much from some of these stats. Of note though, is that Lamar (and RGIII – who dropped in Andrews’ TD pass) clearly loves Mark Andrews, not that there was ever any doubt of that. Starting the season with a 100% catch % on 8 targets is impressive.

It’s also notable that TEs were targeted on 15 of 26 routes. The Ravens have clearly the best trio of TEs in the league, so this isn’t necessarily surprising. The combination of strong TE play and Lamar being comfortable on the level 2 zones, as indicated in the chart above, is a great matchup moving forward. Add in that we have a guy like Hollywood Brown that has shown an ability to stretch the field and it’s going to create quite a challenge for  opposing defensive coordinators.

The real highlight of these numbers is the YAC. Jamison Hensley pointed out that in all of 2018 Ravens receivers only had 3 catches that went for 30+ yards of YAC. Hollywood Brown had 2 on Sunday alone:

It is an absolute dream come true to see a Ravens receiver, and a rookie at that, take the ball and make some guys miss. Brown also had a 14-yard catch (4 air yards, 10 YAC) on a curl route, which showed that DBs are going to have to give him space to respect his speed.

Lamar’s best targeted routes last year came on slants and crossers, which makes sense as it took advantage of his ability to hit some easy shorter looks.

Sunday was no different, but what Lamar obviously showed was his ability to hit the go and post route much more effectively. Those 2 routes yielded 4/5 176 yards and 2 TD.

The success on shorter routes came from the slant, curl, short cross, out and flat routes which resulted in 15/15 and 3 TD.

Incompletions came on a throwaway through the back of the end zone (that sent a Miami fan home with a souvenir), a whip route that Snead dropped and a deep throw to Brown that had a little too much mustard on it.

The Ravens utilized spread formations (at least 4 pass catchers split out) in 10, 11 and 12 personnel on 9 of 26 passes on Sunday. This is an encouraging takeaway given that spreading the defense out is going to go a long way in keeping it off balance.

Most notable of those 9 spread looks, the Ravens had 3 completions with an empty set, as well as 2 plays that didn’t result in a play due to a MIA penalty:

While these used mostly 11 personnel in the empty set, the placement of each player differed. For example:

— Q3, 11:17 had Andrews lined up as the 3rd player on the left (in the slot – just outside of the OL) and Hill as the slot player on the right, which is a traditional look when splitting out your TE and RB into a spread. 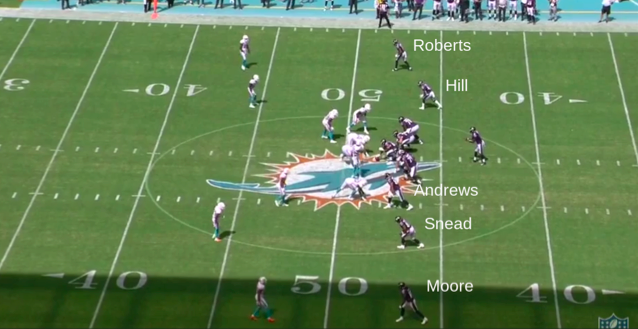 — Q3, 10:26 Hill and Andrews were both out on the left and right boundaries, respectively. 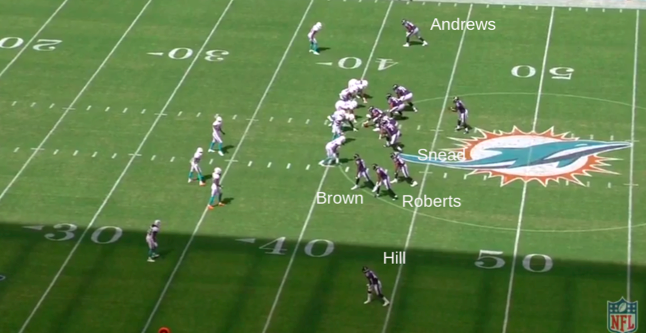 This type of chess play in the formation is going to give the defense a lot of different looks and make it more difficult to game plan. Even if 11 personnel is common, the alignment will look different.

Stay tuned for part 2 of The Coordinators, when we look at the running game!