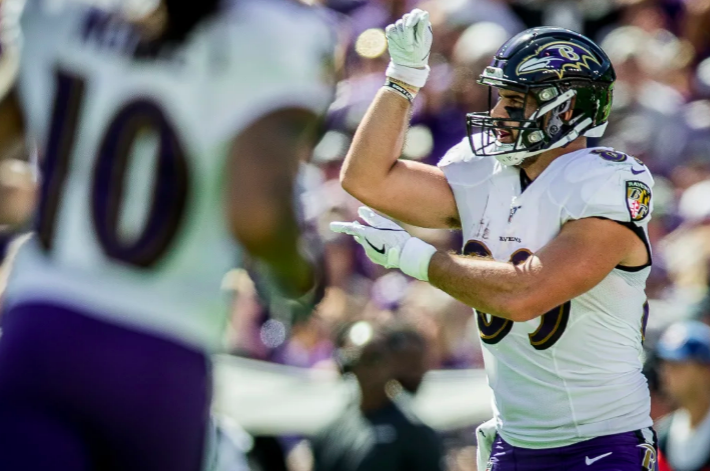 Ravens Flock, welcome back to Week 2 of The Coordinators where we’ll be recapping the offensive scheme from the Ravens’ 23-17 victory over the Arizona Cardinals.

It was another encouraging day through the air for Lamar Jackson, but the real beauty of his game came on the ground. Today we’ll Air it Out before we Run with the Ravens on Friday.

Note to our readers: we have re-worked the formula in which we do run-pass splits. Given that Lamar had 6 scrambles off of pass plays, we found that it skewed the play calling. For example, we had 33 total rushes, but 6 of those came off of scrambles during a passing play. For the purposes of run-pass splits we are interested in the play-calling tendencies of Greg Roman, so we have come up with a new formula to better represent the play calling.

We were able to get a much better idea of Roman’s play calling tendencies in Sunday’s contest after a Week 1 blowout that didn’t give a typical game script.

There’s been a lot of speculation about what Jackson’s attempts per game would look like. When we go back and look at Roman’s tendencies with other quarterbacks who could use their legs, we see a lot of balance in the play calling and passing attempts, which ranged from 26 to 30 passes per game.

Naturally, this led to many betting on the over/under at 30 passes per game. Lamar said himself he expected to be over 30.

We’ll need more data before we can draw some trends, but Sunday did show was that Roman truly was going to take what the defense gave him. While Sunday’s results weren’t literally perfect like Week 1, the passing game nonetheless was the main catalyst for the offense.

The majority of Ravens fans came away feeling a sense of relief with Jackson’s ability to stack two games of consistent accuracy.

There were a few misses and we’ll get into those with specific time stamps of those plays, but overall it was another strong day for Lamar.

His ability to stand in the pocket, go through his progressions and use consistent fundamentals in his footwork and throwing motion are exactly what we all hoped to see.

I want to take a second to go Lamar Jackson’s 2018 passing zones, courtesy of NFL Next Gen Stats 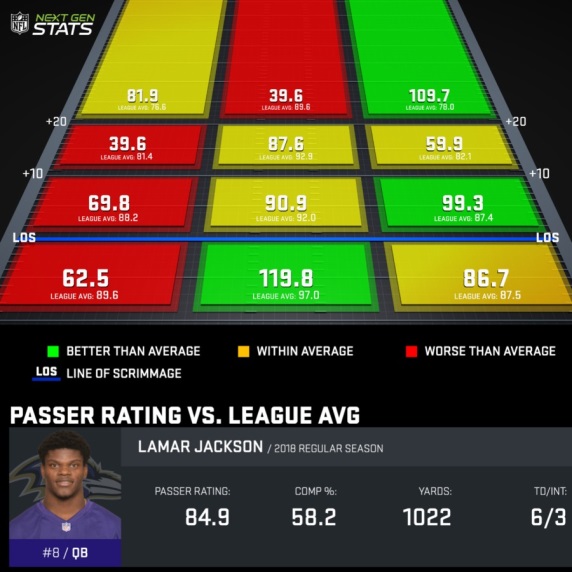 Until we have enough 2019 data, we’ll use this as a reference. If you recall, the big hit on Jackson was his inability to throw to his left side, so that’s something The Coordinators will be keeping an eye on. Not only are we The Coordinators, but we may also become Myth Busters as well. Now here are the passing zones from Sunday: 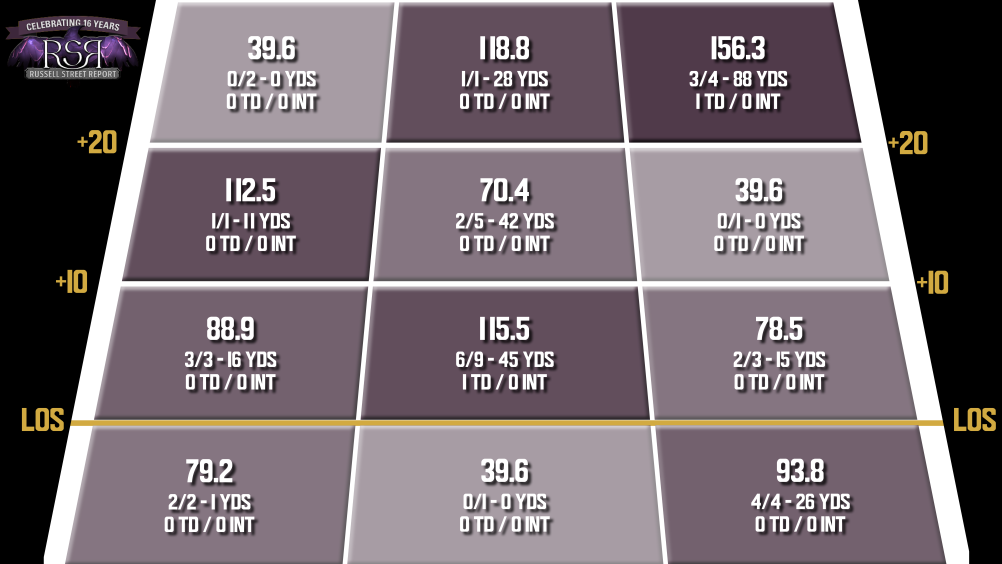 The biggest standout to me is that on 37 pass attempts, Jackson threw the ball to all 16 zones, and only three of the 16 featured just a single attempt.

It may not be on purpose, but it does show that Lamar has no issue aiming the ball at wherever the play design is, or the open man may be. Some of the narrative around ‘Lamar can’t throw to his left’ opined that defenses could key in on the right side because he wouldn’t look to throw left. That appears not true through two weeks.

As for struggling on his left side, his worst zone was the 20+ outside left zone where he was 0/3, but he was also 6-for-6 for 28 yards on all other left side attempts. If we go back to last week, there was only one attempt on the left side and it was a three-yard drag route to Marquise Brown. So with the game script changing and Lamar opening the passing game for business, it’s encouraging to see targeting at all sides and all depths of the field.

Overall, on throws that went 20+ yards Lamar was 4-for-8 for 116 yards, which shows his improved ability to push the ball downfield.

The middle of the field was Lamar’s bread and butter in Week 1 where he had all five of his touchdowns and finished 10/11. He didn’t quite have the same success, but his second best throw of the day (the best being the 41-yard game-clincher to Brown at zone R4) came at the M4 zone where he dropped the ball right in Mark Andrews‘ basket in between three Cardinal defenders for 27 air yards (+1 YAC = 28 total yards).

Perhaps the most intriguing takeaway for the passing zones this week, was the number of targets behind the LOS in L1. Lamar was 6/7 on those throws (2 left, 1 middle, 4 right). Of those seven throws, it’s interesting to note that four of them came in the 3rd quarter on consecutive plays (completions to Andrews, Ricard, Ingram and Brown).

This reminds me of the old Joe Flacco days where they tried to use the passing game as an extension of the run game, using short routes intended to gain YAC when the box was filled with defenders. On those six completions behind the LOS, Ravens pass catchers added 39 yards of YAC (5.6 YAC yards per reception). So if that was the intention, it was a good call.

One of the key highlights of Week 1 was the amount of YAC the Ravens gained on the day. They didn’t have quite the same success on Sunday. It was highlighted above, but 44% (39 out of 83 total YAC yards) of all YAC yards came on passes completed behind the LOS.

Either eek 1 was a statistical anomaly or the Cardinals had stickier coverage on the Ravens pass catchers. Given the state of the Miami Dolphins, you can probably assume the latter played a role.

To highlight just how impressive Mark Andrews has been to start the season, here’s a fun statistic:

He's caught 16 of 17 balls. The 1 he didn't catch? Was the over-throw by Lamar today that he was wide open on.

The dude is an absolute stud and is as reliable as they come.#RavensFlock we got ourselves a STUD

Another guy that deserves a highlight is Marquise ‘Hollywood’ Brown. The sample size is small, but Brown is the 2nd most productive WR, through his first two games, since 1996, according to pro football reference. Who does he trail? Our old friend, Mr. Anquan Boldin.

It is also interesting to note that Brown was the Ravens pass catcher with the highest number of routes run with 37. The second highest was Mark Andrews at 29, followed by Mikes Boykin and Willie Snead at 24. This projects well for Brown, as he figured to be a critical piece of the Ravens passing attack. 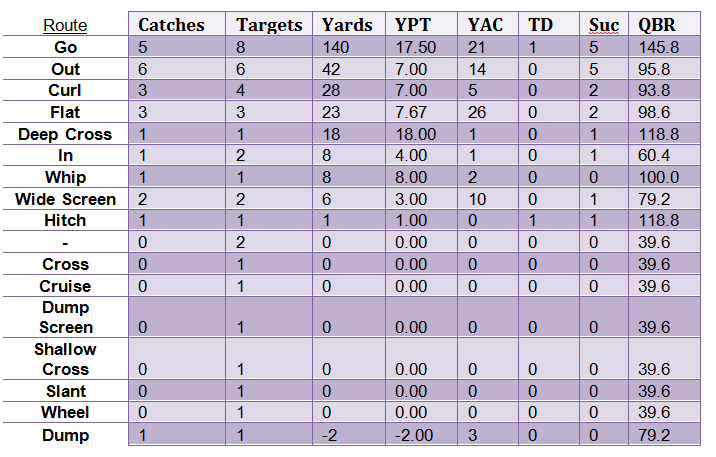 Note to our Readers: the route that has a ‘-‘ indicates a throwaway

The go route continued to be a favorite of Lamar and was the vehicle for the majority of his 272 passing yards. On go routes this year, Lamar is now 8/12 for 233 yards and 2 TD.

He remained perfect on the year when targeting the out route, as he is now 9/9 for 69 yards. An interesting tidbit on targeting out routes from Sunday is that Brown was a recipient of four of the six targets, which bodes well for Brown proving that he can run a complete route tree. With defenders having to respect his ability to get deep, those stop/out routes should be open consistently.

Through two games, there isn’t a route that stands out as one that is giving Lamar problems. He’s had incompletions on four ‘go’ routes, but that’s likely common across all QBs given their more difficult to hit.

It did stand out that Lamar only attempted to target a single slant route on the day. In a game where the Cardinals sent pressure in the second half, it could have been a key route to focus in on, especially given Lamar’s success hitting it, both in Week 1 and in 2018.

11 and 12 personnel served as the catalyst for the passing game this week.

The most surprising statistic that pops out is the yards per target out of 12 personnel. In 12 personnel you’re only working with only 2 WRs, so it’s not typically a spread concept. However, the Ravens went 6/8 for 70 yards and had their second largest YPT of all personnel groupings.

Let’s take a closer look at the formations out of 12 personnel. It was a concern of some fans that with an offense featuring three strong TEs in Andrews, Hayden Hurst and Nick Boyle, we may see heavy 12 personnel, and that would result in defenses loading the box.

Well, Sunday paints a very different picture. Let’s break down a few of the plays out of the 12: 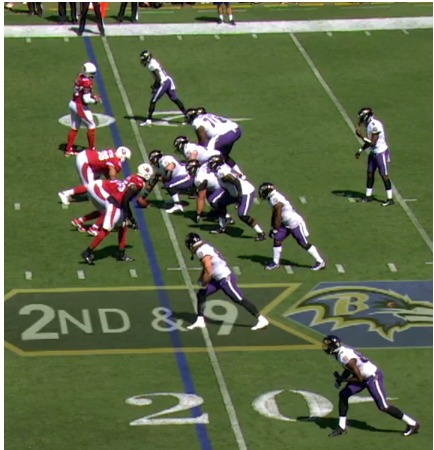 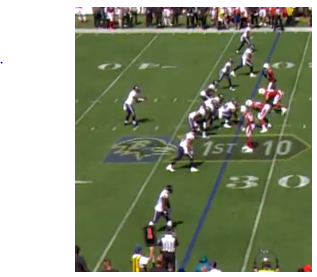 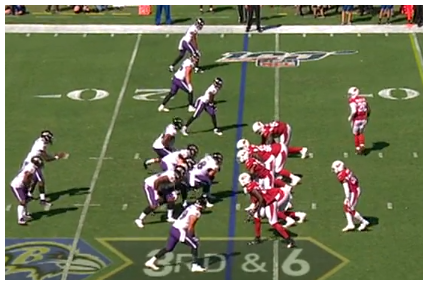 That is four different formations out of the same personnel, all of which ended in completions. The most notable is that of these four, two were true spread formations (Q2, 5:43 & Q3, 7:28), one wasn’t a true spread, but it does split Ingram out wide (Q1, 10:49), and then the last one was more of a typical 12 personnel with the RB in shotgun, 1 TE in-line and the other split out slightly (Q2, 4:29).

This is going to create some headaches for defensive coordinators if they can continue to get success out of these looks. For example, you can use 12 personnel to have a heavy package for the run game, which can force the defense to add an extra LB, but at the same time you can use pre-snap motion to create a spread look and isolate a mismatch on one of those LBs.

It’s something we’re looking forward to tracking moving forward, but Greg Roman did an excellent job of using 12 personnel to create different looks on Sunday.

I suspect 11 personnel will be popular for passing. We’ll get into it more in the run article, but one of the things I was hoping to see against the Cardinals in the second half was more 11 personnel in 2×2 or 3×1 spread formations.

The Cardinals loaded the box to stop the run and I think Roman could have exploited that a bit more by spreading his formation out, resulting in either A) the Cardinals spreading their defenders out to unload the box, or B) creating 1-on-1 matchups on the outside because the Cardinals kept the box loaded.

Minor complaint, but hey that’s what The Coordinators do! We geek out over the offensive scheme.

The matchup with the Chiefs has all of the makings of an offensive slugfest. I’m not sure many teams will be able to shut down the Chiefs offense, so getting into a shootout and limiting TDs may be the key to victory.

The Chiefs defense has had a hard time with TE’s through two weeks and they really haven’t faced a true TE1.

The 12 personnel may be a key to keeping the chains moving for the Ravens, as they look to Air it Out against the Chiefs at Arrowhead Stadium.