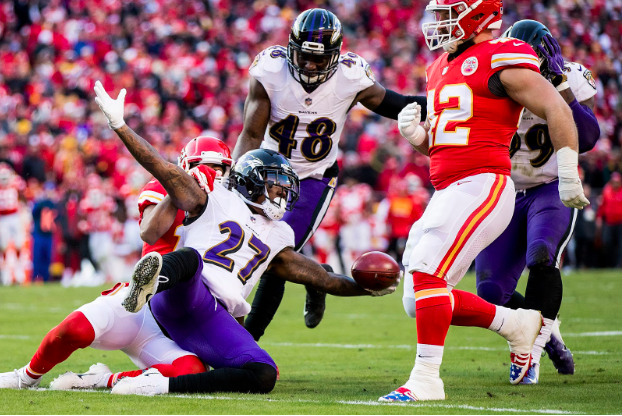 All the stats, notes, quotes, and more you need to get ready for the heavyweight tilt at Arrowhead in Week 3! 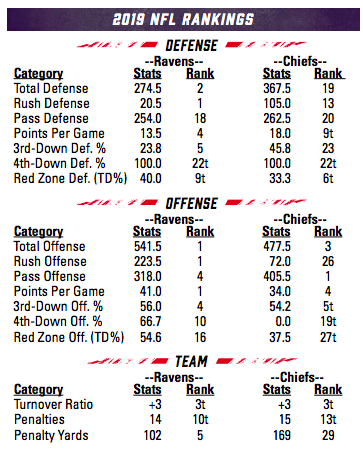 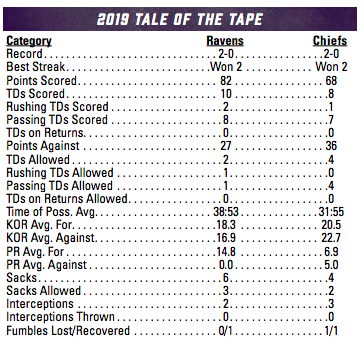 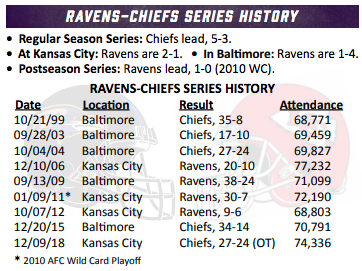 “It’s just going to be a real conundrum for them. It’s going to be a real challenge for them to figure that out. They’re going to have to figure it out for themselves. But this league has a lot of smart people and a lot of great players. As Lamar [Jackson] well knows, they’ll be chasing our scheme. We’ll play one of the best teams in the league [on Sunday] in Kansas City. The stadium will be rocking; it’ll be deafening. We’re going to have to be a much better football team than we have been last week or this week. That’s just the way the league works. This is a smart league, and you have to respect what people can do.”

“Lamar [Jackson] is a real quarterback. People can say what they want, but he can sit back there and drop dimes. He’s going to continue to improve and continue to get better. We have lots of playmakers on the outside – receivers, tight ends. You see fullbacks catching it. You see backs catching it out of the backfield. That’s what we want: a versatile offense and an explosive offense, many moving parts contributing.”

Ravens director of football research Scott Cohen also worked for the Eagles during Reid’s time as the head coach, serving as Philadelphia’s director of pro personnel from 2001-07.

Ravens CB Brandon Carr was originally selected by Kansas City in the fifth round of the 2008 NFL Draft. In four seasons with the Chiefs, he recorded 236 tackles, 65 PD, 8 INTs and a FF. In 2011, he established a career-high and team-leading 4 INTs as part of the Chiefs’ sixth-ranked passing defense (201.3 ypg). He also posted a league-leading 25 PD in 2010.

Chiefs OL Greg Senat was originally selected by the Ravens in the sixth round of the 2018 NFL Draft. He spent the 2018 season on IR and then was waived by Baltimore on 9/14/19.

KC defensive coordinator Steve Spagnuolo spent two seasons on the Ravens’ coaching staff, first as a senior defensive assistant in 2013 and then as asst. head coach/secondary coach in 2014.

Chiefs CB Kendall Fuller (Baltimore) and LB Dorian O’Daniel (Olney) both prepped at Our Lady of Good Counsel (Olney, MD) HS. As seniors, Fuller was named Maryland’s Gatorade Player of the Year, and O’Daniel was awarded first-team All-State and AllConference honors as a running back.

KC run game coordinator/D-line coach Brendan Daly worked as a graduate assistant at the University of Maryland in 2000.

Baltimore VP of public relations Chad Steele attended Leavenworth (KS) HS as a junior and senior while his family was stationed at Fort Leavenworth Military Base. … Chiefs VP of communications Ted Crews is a native of Columbia, MD.

NUMBERS OF THE WEEK