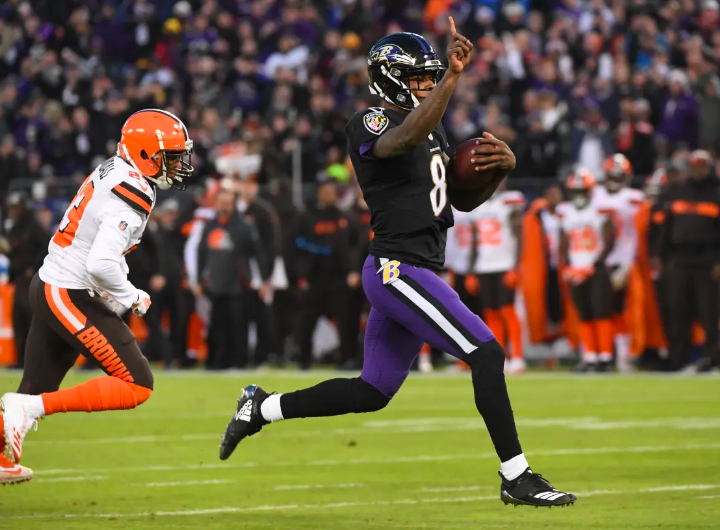 All the stats, quotes, notes, and more Ravens fans need to get ready for the Baltimore Ravens vs. Cleveland Browns in Week 4. 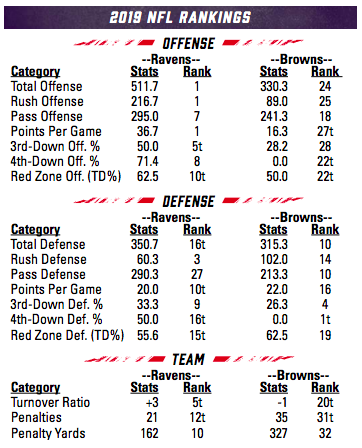 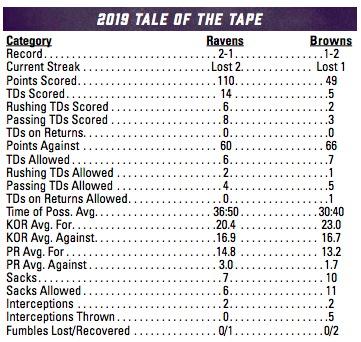 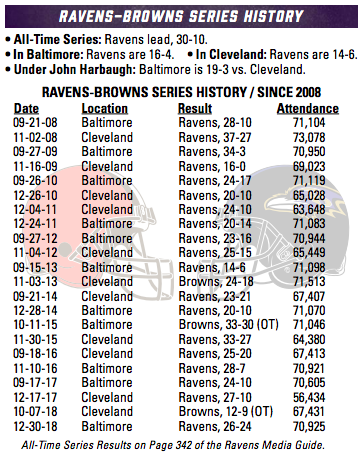 John Harbaugh on Why He Loves the 2019 Ravens:

“I really believe in these guys as a group. It’s a young group, and I love the way they play and the way they compete. We believe in our guys. I believe that they have big hearts. They have spirit. They fight. They compete. That’s why Ravens fans love this team. Can we play better? We will play better, and we’ll learn a lot from [the KC defeat]. So, let’s get better. Let’s play better. Let’s coach better. We weren’t good enough on Sunday, based on the way we played. But we will be, because these guys aren’t backing down.”

G Marshal Yanda on His Role as a Leader:

“I want to be able to help the young guys. I want to be able to show them what we’re doing and how important it is to all of us – no matter how old you are, whether you’re a rookie, or you’re a 13-year vet – that we all play this game because we love it. … Everybody is young in this thing right now. It’s still September football. We’re all building. We all understand that, and we’re trying to keep the guys humble and hungry.”

Ravens EVP and Hall of Fame TE Ozzie Newsome played 13 seasons (1978-90) in Cleveland. After his playing career, he held positions as a scout, assistant to the head coach/offense/pro personnel and director of pro personnel in Cleveland before moving to Baltimore as VP of player personnel in 1996.

Baltimore QB Robert Griffin III played for the Browns for the 2016 season. Ravens WR Willie Snead IV was signed by Cleveland in 2014 as a rookie free agent and spent training camp with the team.

The Ravens’ staff is comprised of many people who were invited to join the franchise when it moved from Cleveland, including: SVP of football operations Pat Moriarty, EVP of public & community relations Kevin Byrne, VP of football video operations Jon Dubé, SVP of operations Bob Eller and VP of IT Bill Jankowski.

Baltimore director of player personnel George Kokinis was the Browns’ GM in 2009. Kokinis began his career with Cleveland as an operations intern (1991) and then as a scout (1992-95).

Ravens senior player personnel executive Vincent Newsome played two seasons (1991-92) for the Browns before becoming a special assignment scout for the team from 1993-95.

Baltimore defensive backs coach Chris Hewitt served as an intern with the Browns in 2001 through the NFL’s Minority Coaching Fellowship Program.

Ravens east area scout Bobby Vega spent 2005-17 within the Browns’ scouting department, starting as a scouting assistant and working his way up to director.

Browns S Jermaine Whitehead spent the last two games of the 2015 season on the Ravens’ roster (inactive for both contests).

Baltimore SVP of football operations Pat Moriarty was born in Cleveland and was inducted into the athletic Hall of Fame at Benedictine HS.

Browns chief strategy officer Paul DePodesta began his career in pro sports as an intern for the CFL’s Baltimore Stallions in 1995. Cleveland director of equipment operations Brad Melland also worked for the Stallions from 1994-95

AND ONE MORE THING… 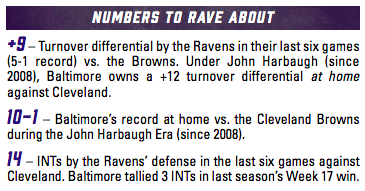