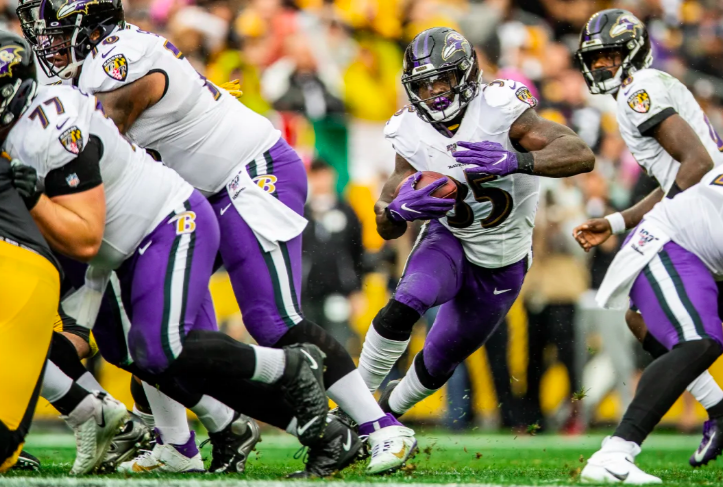 Happy Tuesday Ravens fans! As always, The Coordinators are here to break down the Ravens running attack and get to the bottom of what was going on with the ground game in the Ravens 26-23 victory at Heinz Field against the Pittsburgh Steelers.

So grab that coffee, sit back and let your thoughts be provoked!

Monitoring the play calling of Greg Roman is something The Coordinators take seriously, so once again we’ll start there.

The number of rushes and passes in the box score are slightly misleading, given that 11 dropbacks were not turned into pass attempts due to six scrambles and five sacks.

When we correct the charting for those, it goes from 40 rush attempts and 28 pass attempts to 34 run plays called and 39 pass plays called.

This is an important correction because when we look at Roman we have to look at what he controls. He calls the play, but then it’s on his guys to execute. He continues to be a very balanced play caller.

I know the topic of analytics are a sore spot with Ravens fans this year after John Harbaugh’s Arrowhead experiment with their usage, but they’ve become a big conversation with play calling, thanks in large part to Warren Sharp (@SharpFootball).

He speaks a lot about the pass calling tendency on first down and how it’s not effective to run too often when starting a new set of downs. When we look at our 1st down tendencies from Sunday, we see 21 carries on 1st down versus 10 pass attempts on 1st down.

This is the type of disparity Mr. Sharp is talking about, and usually I would find this concerning from a game planning perspective.

So why don’t I? Well, as I mentioned, some of that disparity came from QB scrambles on called pass plays. Of the 31 1st down plays, five of them were QB scrambles (Which represented five of six Lamar Jackson scrambles on the day).

The new revised breakdown when we factor in QB scrambles on plays that were meant to be pass plays is 16 run plays to 15 pass plays.

Balanced, like all things should be. Okay, that’s enough Thanos, but it just goes to show how important it is to consider QB scrambles when analyzing the play calling. The reality is, Roman is doing a very good job of balancing his play calling to keep the defense off guard.

That’s all I can say about the YPC numbers. This is the first game of the year where the Ravens rushing attack was held under five yards per carry, which is pretty crazy when you think about it.

Let’s take a step back and think about the Steelers defensive line though. It was tough sledding all day long against a stacked front of T.J. Watt, Stephon Tuitt, Cam Heyward, and Bud Dupree.

When you’re in the business of football you have to remember that these guys get paid too and they controlled the line of scrimmage well.

The Ravens had to turn to the legs of Jackson once again and he was able to grind out 70 yards on 14 carries.

When you look at Mark Ingram’s stat line, perhaps the most worrisome thing is when you take away his 14 yard rush, it leads to a line of 18 carries for 30 yards, which drops his YPC to 1.66.

You have to respect their ability to go to the ground, but it just was not there with Ingram.

Another surprising takeaway from this game was the ineffectiveness from Marshal Yanda and Orlando Brown Jr. For those who have been following weekly, you know that running to the right has been very strong, and running behind Brown Jr. on outside zone runs has been a real strength.

It was not the case Sunday, as I think Brown Jr. may have had his worst game run blocking as a Raven. Yanda also turned in a rare bad performance and the numbers reflect that.

Again, when you take out that 14-yard run you’re looking at 16 carries to the right for 34 yards.

Luckily this is a statistical outlier and not a reason to begin thinking it’s a trend.

That said, The Coordinators will keep an eye on it and we’ll be looking for more success running to the right on Sunday against the Bengals.

Let’s take a look at the positives though, and that is that in run blocking, the left side of the line had a pretty strong day.

Ronnie Stanley has been an absolute stud this year and Bradley Bozeman was great in run blocking on Sunday.

Let’s get into the film (as always, follow @abukari for great film breakdowns of the Ravens):

Some run game clips for my guy @ColeJacksonRSR. This 14 yd run on the power concept was the longest one of the day. It was a grind it out kind of afternoon against that Steelers front. pic.twitter.com/YcYSWWqmRD

This is a run to the right, but what made this block was the pull and seal by Bozeman. Andrews loses the outside shoulder a little bit as he engages, but Bozeman shows great awareness to see that and then seal the shoulder maintaining the lane. That was the Ravens longest run of the day.

Although it was tough sledding in the run game, the Ravens were 8/10 on short yardage runs (4 yds or less to go). Here they run an unbalanced line to the right on this 3rd & 2 play. Check out the movement Bozeman & Skura get on that left side. Pound the down! pic.twitter.com/JhYwjsFSke

The run is designed for the right, but Edwards sees the backside cut. Hurst perfectly contains Dupree and Bozeman and Skura double team their way to open a lane.

Great read by Edwards and tremendous push on the double team. Shout out to Hurst for that seal block as well.

I talk about this often, but sometimes the best blocks aren’t the pancakes or the ones where guys are getting driven. Sometimes you just have to get the job done.

Had to include this one. 2 unblocked defenders in the open field and Lamar shakes them both and picks up a 1st down. Edwards is working for outside leverage; Williams has inside leverage. They're not in terrible position to make a vice tackle but Lamar man … enough said. pic.twitter.com/cSnB1rRXKj 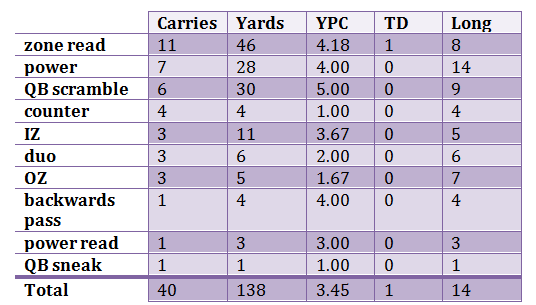 As mentioned, it was Lamar’s legs that served as a great way of getting the run game going.

Similar to last week, it was the zone read that was the most effective doing that.

When we’re looking at the zone read, you have to remember that you really need the QB to show a pull and run a few times to get the defense to begin focusing on them in order to make it its most effective.

This is what the Ravens did last week against the Browns and they did it against this week. On the first two called zone reads Lamar pulled both and went for eight and seven yards, respectively. Then on the 3rd, Ingram did get the ball and went for four.

It’s that type of approach that will keep this run effective, but it does rely on Lamar rushing the ball.

Lamar's contributions on the ground where very important in this game. Here he gains 7 yds on this zone read concept on 1st & 10 from the PIT 11. The end crashes, Lamar keeps. Good blocks by Snead & Stanley. Ingram scored 3 plays later. pic.twitter.com/sww50eXNPk

This play highlights what I’m referring to. You see Dupree come down on Edwards and it opens a big lane for Lamar.

However, if you pause right at the 0:02 mark you can see the dilemma that Dupree has. If he follows Lamar then Edwards has a free shot off of Stanley’s outside shoulder up the field.

Here's another Lamar run on 3rd & 1 on the game tying drive late in Q4. Here they block the DE. I've been trying to figure out since last season if these are designed QB runs or if he's reading level 2, e.g. Devin Bush (55) on this play, for his give/keep decision. pic.twitter.com/4kR5aFMFJ4

This is another one where the defensive line sells out to prevent the dive on 3rd and 1, but in doing so it gives Lamar the opportunity.

Another positive note to pull away is that on 10 plays with 4 yards or less to go the Ravens pulled out a 1st down on eight of them.

Luckily Jackson did show a strong ability to get out of bounds and avoid contact this week.

So what went wrong?

Well, the answer is actually pretty simple. From breaking down the numbers and watching the film, there doesn’t appear to be any statistical sore spots that stand out that give the conclusion that the ineffectiveness of the run game was based on game planning or play calling.

It simply comes down to your offensive line not executing.

There’s always the ‘blame game’ after every game where we try and determine if it was the coaches or the players that led to poor results.

Like most things in life, there’s usually a little bit of both, but when you look at the play calling, it was pretty much business as usual.

Given the variance in play calls, the unpredictability on downs and the fact that this type of approach has worked in previous weeks, it leads to the conclusion that the Ravens’ big guys didn’t beat the Steelers’ big guys.

Sounds simplistic, but the numbers and film support it.

The positive note is that, as mentioned earlier, this appears to be an outlier for Brown and Yanda, and I have zero reason to doubt this will get better next week.

The lowly Bengals come to MT&T to take on the Ravens.

I’m not going to put this lightly, I think this needs to be statement game. In particular, it needs to be a game where the line comes together and has a very strong performance before traveling across the country to take on another good defensive line in the Seahawks.

I’ll be preaching it all week, but this needs to be one of those confidence-boosting games that brings the team together after going through some adversity the last two weeks.

It’s also another divisional game and they can play a big rule in breaking ties at the end of the year.

Time for our big guys to make a statement and move their big guys!