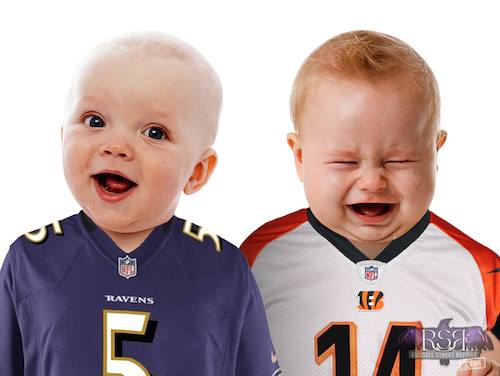 The Ravens held on to beat the Cincinnati Bengals, 23-17, in Week 6. RSR staff react to the win here.

— The Ravens pulled out a key victory against a divisional opponent and improved to 4-2. The Browns lost to Seattle 32-28 and the Ravens now have a two-game lead in the AFC North.

— Lamar Jackson is going to try and beat teams any way he can. If that means running the ball 19 times, that’s fine with him. Teams have a strategy to stop him, but many of them still fail.

— The Ravens secondary had a bounce-back game against Andy Dalton, who traditionally plays well against them. Marlon Humphrey is a big-time playmaker and the Ravens need to secure an extension with him.

— Next week’s game against the Seahawks will be a tough test. Still, the Ravens have to like being 4-2 at this point of the season.

As I said in our Bold Predictions, I’d have been all over Cincy +11.5 if I was a betting man. The Ravens put up 14 points in the first quarter, then just three field goals over the game’s final 45 minutes. That can’t happen if they want to be true contenders. In addition, their pass rush was nonexistent against a team that had given up 20 sacks in their first five games (until the final drive).

Celebrate the win – as we celebrate them all – but I don’t expect to see many more over the next month.

If you thought for a second this game wouldn’t be within a score, you were fooling yourself. The Bengals are 0-6, but they have some pieces. The Ravens defense was a bit better in coverage, the run defense was strong, but the pass rush against a weak offensive line was still weak. That is my biggest concern coming from this game.

Lamar Jackson was solid all day long, making fairly quick reads, running the ball well and not turning the back over. I expected the Bengals to stack the box and that’s exactly what they did. I hoped for a couple more shots down the field against that style of defense but obviously that did not come to fruition.

Any win in the division is a good one, even if this could’ve and should’ve been more of a one-sided affair. The Ravens head to Seattle next, and make no mistake, that’ll be a bigger challenge.

A game where the final score was misleading for multiple reasons.

Outside of the opening kickoff score, the Ravens outplayed the Bengals for most of the game. The Ravens formula to win was showcased, controlling the clock via the run game, and taking shots off play-action. The defense played better then expected, and outside of a few plays, the communication was a lot better. The Bengals knew that the offensive line was not good enough to handle the Ravens defensive front (which is still not good), and they couldn’t win any of their matchups outside of Auden Tate.

Here are my worries moving forward, which I don’t think will be solved this season.

— The pass rush is concerning. The starters and depth pieces really provide nothing to get excited about. Matt Judon (in a contract year mind you), is not playing at the level that will get him a contract like Za’Darius Smith got.

— We all know that outside of Humphrey and Thomas, the secondary is average at best. Regardless, it makes more sense to keep Chuck Clark and DeShon Elliot in at starters to see what they can do.

— The lack of playmakers on offense outside of the TE core is telling, but imagine what could happen if we add a true “X” receiver to compliment Brown and Boykin moving forward.

–The Ravens will most likely win the AFC north by default, but they have to figure out the roster sooner rather then later so they can capitalize on this window.

The Bengals team might be a mess right now but this game is a reminder that ball control is always an option to win  It never felt like this game was close with the exception of the first touchdown on the opening kick-off. When Lamar is running on the perimeter it’s extremely hard to stop and opens up everything else. On the flip side Lamar can’t run that much every week.

Marlon Humphrey once again shows why he’s the best defensive player on the team. If you want to erase a receiver Humphrey is the man for the job.

Josh Bynes and L.J. Fort seem to have a really good grasp of the defense already in just two short weeks.

Chuck Clark and DeShon Elliot seemed to handle their duties quite well in place of Tony Jefferson. I expect to see them make a bigger leap in the coming weeks.

Schedule is tough for the next several weeks. It’s time to see what this team is made of.

The score of this game is incredibly misleading. The Ravens dominated Cincy across the board, except maybe special teams.

Lamar Jackson once again showed his dangerous ability to run, and while I don’t think they needed it as much this game, he’s proven that if any facet of the offense isn’t working, his legs probably will. I’ll be looking forward to seeing how much the Ravens utilize his rushing prowess against Seattle and New England.

The defense looked much stronger this week, which it should have. I’m still conflicted on Maurice Canady, though. While I don’t think he was nearly as bad as the broadcast crew made him seem, I do want to see Jimmy Smith back opposite him. Meanwhile, Clark and Elliott held up nicely on the back-end.

The running defense was stellar, and for me, that’s the most important takeaway. Seattle will run all over the Ravens if they have a poor game in that facet, and it may end up being the difference in the game. I have confidence that the secondary will hold up in man-to-man and force Wilson to make plays, which makes it all the more important for Brandon Williams and co. to stuff Chris Carson.

Sticking with next week, the pass rush has to be better. I’ve seen flashes from Bowser but not enough, and to prevent Wilson from extending plays until the receivers are open, Baltimore will have to shake him up.

Good win, but IMO the Ravens need to split these next two if they’re a real contender.

Today went about how I expected. The Ravens relied on the run game, squeezed the clock late and played sound enough on defense to not get burned too badly by a near punchless offense.

With no Marquise Brown I thought the Ravens did well to get their receivers going on crossing routes from condenser sets. Probably something they need to figure out ways to keep doing even when Brown returns.

Justice Hill is a player who should see consistent touches going forward. His playmaking ability is being underutilized to this point.

Lay off Canady, with Marlon Humphrey putting Tyler Boyd in a straight jacket, where else would the targets go? He gave up catches but I didn’t see many egregious errors from him.

Onto next week where Russell Wilson awaits 🙁

It’s impossible to ignore the fact that the Ravens’ four wins are against teams that are 2-18-1. Sure, a win is a win but this team needs to prove it can beat a quality opponent. With games against the Seahawks and Patriots on the horizon we’ll know in the next three weeks if they’re contenders or pretenders. The fact that only one of those four wins was a stress-free one isn’t a great sign. It’s interesting that with all the personnel turnover this team still seems like they’re playing not to lose games rather than playing to win them. They’ve got a firm grasp on the division but anyone who feels good about it is lying to themselves.