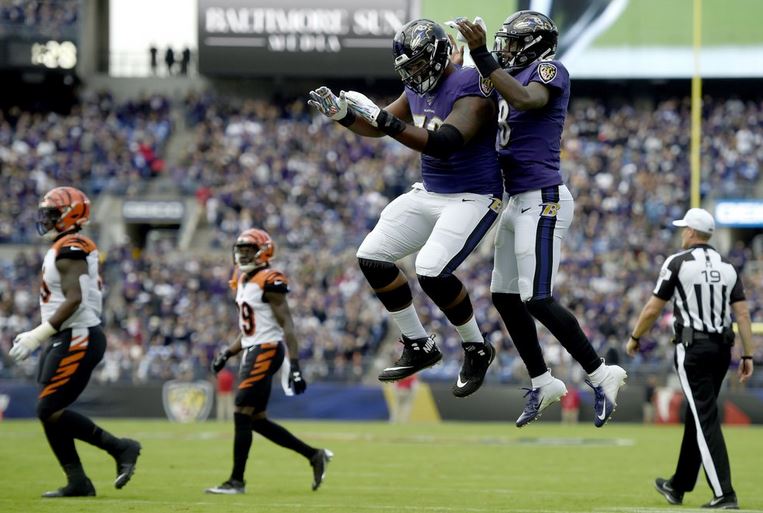 The bye week is the perfect time to do some check-ins on some of the nitty gritty details of the Ravens offense.

One of the more common complaints I’m noticing in the twittersphere is that the Ravens are struggling in the red zone. As always, that means it’s time for The Coordinators to investigate the data and tendencies to try and identify some of the issues and break any myths that may exist.

Before jumping into it, I want to take the time to acknowledge Josh (@yoshi2052) who is the data guy for The Coordinators. If you need any data points pulled, just tweet at him and he’ll likely have it available. If it isn’t readily available, he’ll find it for you.

The RZ Offense through 7 weeks

The red zone offense has certainly suffered from some issues, but relative to the rest of the league, it hasn’t been as doom and gloom as some think. Let’s look at the numbers.

The Ravens have had 70 offensive drives through seven weeks. Of those 70 drives, 26 have resulted in a red zone scoring attempt (37%).

This is significant because the Ravens are currently 1st in the NFL in 2 categories:

The scoring success in the red zone is a big part of that. Of those 26 red zone drives, 24 have resulted in points.

The only two unsuccessful attempts in the red zone came against the Dolphins and Cardinals in both cases, the Ravens kneeled out the clock in the red zone to end the game. Given the context of those drives, we’ll remove those, as the Ravens intentionally did not attempt to score.

To break it down:

It should be noted that during one of the RZ trips in the Cardinals game, the Ravens entered red zone territory on 3rd down before kicking a FG. Play sequence:

It counts in the official percentages, but it is important to distinguish that it wasn’t necessarily a Red Zone opportunity.

Ranking Against the Rest of the League

In terms of coming away with points in the red zone, obviously the Ravens are top of the league. As mentioned, those two game-ending drives should be removed because they were running out the clock, as opposed to trying to score. With that said, the Ravens have scored on 100% of red zone drives. This speaks to their ability to protect the ball, as they still haven’t had a turnover in the red zone.

When looking at coming away from a red zone drive with a touchdown, the Ravens are currently ranked 15th in the NFL at 57%. The Buffalo Bills lead the league, scoring a touchdown in the red zone on 69% of their attempts.

Sample bias does play a role. With more attempts, naturally there are more possibilities of a failed attempt, or settling for a field goal. Let’s compare to the rest of the offenses that lead the league in RZ attempts per game:

This is where we see some interesting data. The teams with the highest attempts per game aren’t in the top of the league in touchdown rate, and the Ravens fit right in there with NE and LAR. The real cream of the crop here are the Seattle Seahawks – coincidentally, the Ravens only allowed a touchdown on one of their four red zone drives last Sunday, so that’s great news for the red zone defense.

It’s important to do these league-wide comparisons, as sometimes fans can get stuck where we only watch the Ravens play and don’t have the full context. If you’re frustrated with the Ravens red zone offense, just imagine being a 49ers fan! 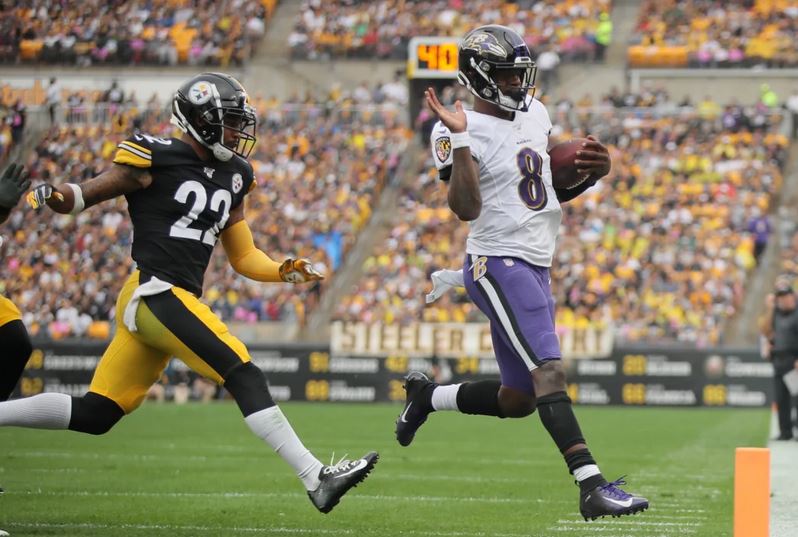 Lamar Jackson in the Red Zone

Lamar has protected the ball well this year, as evidenced by having 0 turnovers in the red zone, but the passing offense has not operated well enough in the red zone.

Issues in the Red Zone

A few weeks ago the Ravens got into some of the issues with the passing offense following a win against the Steelers.

Some of the issues to identify with their red zone offense are similar.

The play-calling at times has left a lot to be desired. For example, the Ravens haven’t done a good enough job using some of the length on their roster, such as Miles Boykin. One thing I’d like to see the Ravens try is a back shoulder fade to Boykin. With Lamar’s improved accuracy, and Boykin’s short area quickness and length, it should be a good match to get off the line quickly and get enough room. Additionally, splitting Mark Andrews out on the boundary could result in a LB or S matched up on him to again create a mismatch where Andrews can use his size.

The overall play-calling for the Ravens this year has been one of balance. A few outliers exist, such as the KC and CLE games where they were playing from behind, which naturally leads to more passes, but overall it’s been a pretty balanced approach.

That hasn’t been the case in the red zone, where the rush offense has been the go-to. More balance, and more shots into the end zone, may go a long way to upping that TD percentage.

That said, the Ravens have suffered from pressure during red zone passing attempts. It isn’t necessarily bad offensive line play; it’s seemed more like timely blitzes, likely teams preparing for the run, and the ball not getting out quick enough leading to throwaways or bad attempts.

Some nicely schemed crossing routes and deep ball fades are two suggestions that the RSR Coordinators propose. Of Lamar’s 16 red zone completions, six of them have been for touchdowns, so there’s a big reason to keep chucking that ball into the end zone. Lamar has also done a great job of putting the ball in a position where only his guys can get it.

As always, The Coordinators will be tracking these trends as the season goes on, but this is a bye week pulse check that indicates that Ravens are doing well in the red zone with room for improvement.