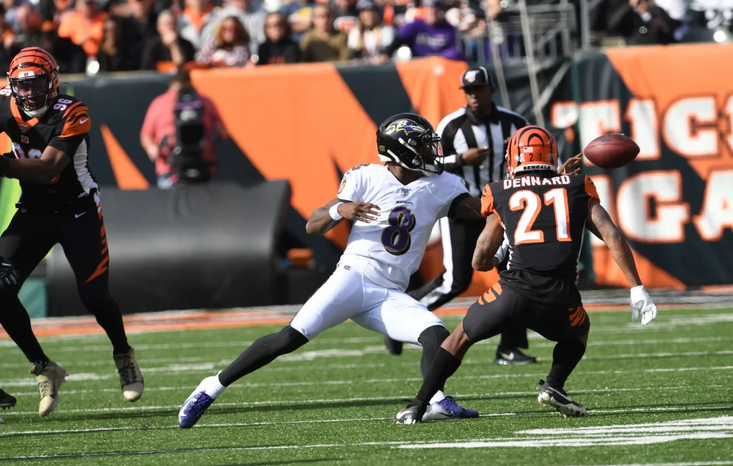 Like many, I felt a weird sense of nerves going into Sunday’s contest at Paul Brown Stadium in Cincinnati. Fortunately , what surely looked like a trap game turned instead into an absolute dismantling of the Bengals by the Ravens offense.

However, for the first time of the 2019 season, it was the pass game that served as the catalyst of the Ravens offense, and not the run game.

Now, that’s not to say that the run game wasn’t effective because it certainly had a fair amount of success, but rather the Ravens exploited the middle of the field in the pass game and used their tight ends to move the ball.

When we look at the by-quarter breakdown, you can see that during the 1st quarter, when the game script was still competitive, the Ravens didn’t have a lot of daylight moving the ball.

That said, let’s breakdown the total game and see what did work well for the Ravens on Sunday!

*note – Griffin had ONE carry, not zero, but the official box score lists him with zero. If you know why, let us know, because we sure don’t!

Some have asked why RGIII didn't receive a carry in the box score for the Heisman formation option play.@Yoshi2052 figured it out (like he always does)…

Seriously, #RavensFlock is lucky to have the data man! pic.twitter.com/CdwjzU2VB3

These are some smaller carry amounts than we normally work with, but as you can see the running attack with the Ravens RB group wasn’t overly efficient on Sunday.

Mark Ingram had a hard gaining chunk yards in this contest with five of his nine runs going for four yards or less. He did successfully use his power game to make some crucial plays though.

Q1 3:57 – can't imagine too many iLBs want to see a 300lb dude like Ricard as a lead blocker pic.twitter.com/BHrtuSnpoG

Ingram welcomes contact on the goal line carry and leverages his inside shoulder low into the defender to allow himself to continue driving across the goal line. The other part that stands out is Patrick Ricard pile-driving the Bengals defender back into the end zone. That drive block gives the space that Ingram needs to get in. If he doesn’t push his man back, you could have a logjam of two defenders and Ricard blocking Ingram from crossing the plane.

You want more Ricard? You got it!

I'm still charting the run game (late start this week) but had to stopd & share this clip. Watch @PRic508 sustain his block on LB57 damn near 10 yds downfield, finish him to the ground, then skip off the field. So awesome! pic.twitter.com/UaSwYtWfoq

Ricard comes across in motion, as we’ve seen numerous times this season and he basically picks up his man and carries him 10 yards down field. A guy like Ricard doesn’t get a lot of the spotlight for doing the dirty work, but he’s quickly become one of the best fullbacks in the NFL. Some have said the fullback is fading, and while that may be true in some schemes, it certainly isn’t here in Baltimore. Ricard is an essential piece to making the run scheme work and he brings that old school “play like a Raven” mentality.

Let’s look at some of the other successes of the Ravens running game.

For those of you out there that love college football as much as I do, you’re very familiar with the option pitch. Additionally, if you played a lot of the NCAA football video game series like I did, well then you probably spent hours running the option there yourself.

The Ravens have begun to utilize the option pitch with Jackson’s running ability in a way the NFL hasn’t seen before. Don’t confuse that with it never being used – it has been, but Lamar’s use of it is a lot different for a few reasons. Firstly, his speed just isn’t matched by any other QB not named Mike Vick. Secondly, his football IQ leads to movement patters that set his opponent up to make the play successful. Let’s use an example.

The CB following Marquise Brown as he goes in motion is the guy that Lamar Jackson is reading. Nick Boyle seals off the edge player and it allows Lamar to get out on the defender in a 2-on-1, which is exactly what you want for the option to be successful. Last week, I referred to it as making the opponent pick their poison and this is another example of just that. The DB has to choose whether he takes Lamar and forces the pitch, or if he prevents the pitch and gives Lamar the inside lane.

The Ravens’ blocking on this play in particular was superb. If you pause the clip in the tweet at exactly 0:03 you’ll see how open the inside lane was if Lamar had kept it (Ronnie Stanley would have had a 1-on-1 block on the deep safety).

So what makes this play special? Lamar steps up and uses a stutter step to force the defender to step into him, which opens up Ingram on the outside. He used that stutter step because it allowed him to get his base back to neutral to make the pitch, which was now decently far. Ingram continues with the ball for a nine-yard gain.

The Ravens also used the option in another play from the “Heisman formation.” which features Jackson, Robert Griffin III and Ingram, who won the Heisman in 2016, 2011 and 2009, respectively.

From the all-22 angle the crease between 21 & 59 doesn't look that big, but check it out from the endzone angle. If Lamar cuts inside & is able to beat Vigil (59), it's a house call. Seeing how secondary & pursuit reacted here might be what lead to his 47 yd run in Q3. pic.twitter.com/AiRMJHvVrj

Lamar uses a similar cut to try and force the defender to commit to him and open a lane on the pitch for Griffin. As Michael noted, it may have been the wrong call. If Lamar cuts that, he only has 1 guy to beat and he’s off to the races.

Speaking of off to the Races

From the end zone angle this play is even more beautiful. It’s a standard read option and Nick Boyle as the motion man makes a perfect cut block to open the lane for Lamar.

What makes this play unique is the razzle dazzle that Lamar adds to it. A beautiful juke move followed by a spin that leaves FIVE Bengal defenders within a couple yards of one another. Lamar turned a standard play into a play of the year candidate. 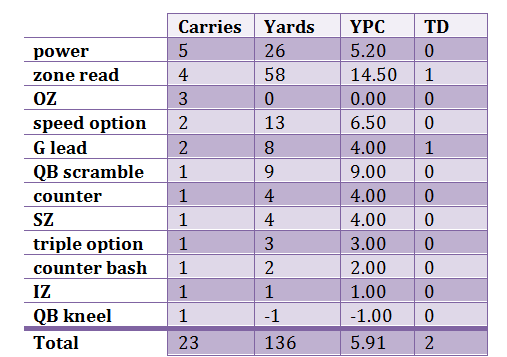 Overall, the run game breakdown was pretty vanilla (outside the Heisman formation, of course) as the Ravens went into victory mode early in this game. It should also be noticed that because the Ravens scored two defensive touchdowns, the Bengals had the ball more than the Ravens did, which led to fewer total plays (far fewer than we are used to seeing from this offense).

The zone approach didn’t work as well on Sunday, which is something the Ravens will surely try and fix up against the Houston Texans. The Texans may go to some DB-heavy packages after Lamar thrashed the Bengals in the air. In that case, going inside and outside zone can be incredibly effective to move the ball. Note: this is what SHOULD HAVE happened against the Chargers in the playoffs when they loaded the field with seven DBs. Luckily, the offensive line as a unit is much better than in that game, and Greg Roman’s current playbook gives him a lot more options to counter such a defense than the one the team was using in January did.

Similar to the games against the Seahawks and Patriots, the Ravens will operate best when they control the clock and run their offense. That will involve a mixture of zone, power and read option runs which have been staples of the #1 rushing attack in the NFL.

The Texans being without J.J. Watt certainly helps, as he can single-handedly destroy teams. That said, the Texans still have a good EDGE defender in Whitney Merceilius, who is playing well in a contract year.

I’d expect some heavy amounts of read option plays, as the Ravens will use Jackson to keep the defense a half-second slow.