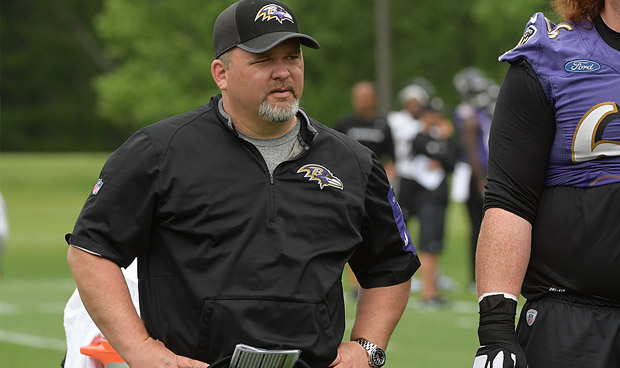 The Coordinators are going a bit off tendency this week. Rather than focusing on the offensive recap, we wanted to take a step back and look at the overall approach of the Ravens offense compared to what the rest of the league is doing.

It’s been talked about for year and it really shouldn’t surprise anyone, but the NFL has become a passing oriented league. Ty Schalter over at FiveThirtyEight wrote a very solid article on it back in 2017.

However, Ty concluded that defenses are striking back. That may be true, but there is no doubt that team building tendencies are still more oriented toward the passing game than the running game.

Let’s take a look at some of the trends that have changed how offenses are constructed:

Formations are more WR-focused. Going back to the smash mouth days of the 2000’s, a typical offense would be 21 personnel (2RB, 1TE, 2WR). Today, most teams consider the slot WR a starter instead of a FB.

Reduction of the Fullback The fullback was prominent in many offenses, especially the Ravens’. There are now fewer dedicated fullbacks in the NFL and they aren’t used as much.

Decreased use of base formations. To compensate for three starting WR’s, many defenses use the nickel defense as their base formation, which starts a CB instead of either a LB or an IDL. The Ravens, for example, barely use their “base” formation.

Focus on stopping the pass. Pass rushers and defensive backs have become most important than in the past. In contrast, linebackers aren’t as important, unless they are strong in pass coverage.

Reduction of the run-stopping LBer. We’re seeing a decline in play from linebackers who were once considered critical to stopping the run. They’ve been reduced to 2-down players, given their exposure in pass coverage.

The NFL began to Zig

With some of these trends emerging over the last 10-15 years, NFL teams began to zig with the trend. The focus of drafts and free agencies became more focused on players that would help the passing game on one side, and help defend it on the other.

Speed became a big focus of player personnel, like it did in many sports. The NHL and NBA have seen similar trends. Enforcers and checking line players have declined in the NHL in favor of more skilled players taking up bottom-six roles. The NBA has seen a transition of the power forward position with more of a focus on guys that can stretch the floor and shoot, as opposed to some of the defensive bruisers that played the 4 in the 2000’s.

This has led to some positional changes when players make the jump to the NFL. Several players that were safeties in college became ILB’s, such as the Ravens own Patrick Onwuasor, to better fit their skillset. There’s also fewer box-safeties that were the standard SS position for many years, with a focus on guys that can play with range to aid the passing defense.

As a result, teams have become lighter, but faster.

While the NFL Zigged, the Ravens Zagged

However, here comes the zag that the Ravens have accomplished. Defenses are getting lighter, faster and better against the pass.

The Ravens have certainly gotten better with their passing offense with the improvement of Lamar Jackson’s arm, but they’re using a power running game as the catalyst of their offensive attack.

The heavy use of tight ends and using 6’3 300-lb Patrick Ricard all over the offense as a fullback, h-back, motion man from the slot WR position and as a tight end has all aided the re-emergence of a power run game. Nick Boyle and Hayden Hurst are providing very productive blocking and Mark Andrews isn’t a slouch in the blocking department, despite what his scouting reports said.

You gotta love Pat Ricard. When he's at FB, he's just gonna sustain and finish blocks. Not sure where he's taking Rapp at the end of this play but I do know he's going to finish LOL pic.twitter.com/qKRZZ4vcde

This is the type of game Ricard brings to the table. This play wasn’t a highlight, but it does show that Ricard will play to the whistle. It looks like Michael Oher in The Blind Side driving his man back to the bus.

The real beauty of what they’re doing on the ground is the combination of the power blocking scheme with some serious speed. Jackson’s speed behind that blocking scheme is a thing of beauty. Mark Ingram and Gus Edwards are more power runners, but they play with great burst and it leads to some big chunk yard gains.

They have zagged because they are able to play multiple TE sets and use a FB which welcomes defenders into the box, but then still run all over them because they overpower them.

Nice job by Pat Mekari feeding the nose shade to Yanda then climbing to level 2 and fitting up on Rapp (24) pic.twitter.com/2JZnExVdlL

Here we see nine guys in the box with a safety creeping up. They’re merely reacting to the diamond formation with four players in the backfield and the 13 personnel. If you can find me another team that’s willing to do this and then have a successful run, I am all ears. I don’t think you will though.

It’s straight up power blocking up front. Stanley and Bozeman + Mekari and Yanda double team their guys, with Andrews kicking out and Boyle coming across the formation as the lead blocker, similar to a pulling guard in a power run. Both Stanley and Mekari come off of the double team and almost the same time (pause the video at 0:07 to see what I mean) and into their next man.

Actually, Stanley may have missed his man (Eric Weddle), but Edwards runs him over anyway. Nonetheless, this is just true power football combined with an impressive burst from Edwards.

Let’s take a look at the snap counts from Sunday that Matt Wise broke down.

Those defenses don't hold up to Baltimore's ground game.#RavensFlock https://t.co/mmDaiUzeBm

Matt notes it in his tweet. Defenses have spent years building up for the pass, but the Ravens are now hitting them with the run game that uses heavier packages.

The Numbers from Sunday 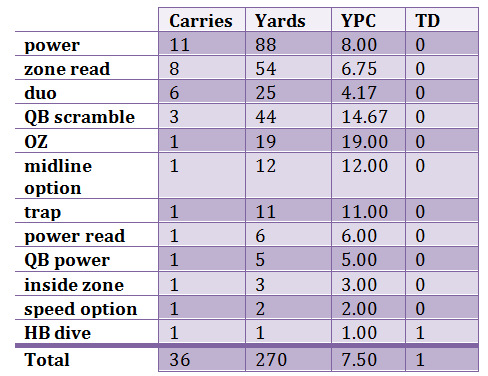 These are the numbers on Q1-Q3 only, as I want to focus on the starting offense here. The power run game was the catalyst of the offense, but they also used a number of duo runs. Duos use double teams up front to focus on a certain area of the line and take them out.

I would speculate that duos was worked into the game plan more this week as it’s an appropriate way to attack Aaron Donald and force him into double team looks.

It’s interesting to note that inside zone and outside zone were only used once each, despite a healthy amount in previous games.

The game script began with a power focus. Eight of the 12 first run plays were power (including power read and QB power) focused runs. Of those 12 first run plays, only two went for fewer than four yards and the shortest was a three-yard gain.

To put it simply, the Ravens hit the Rams in the mouth and they didn’t know how to react. This is something the Ravens have done five weeks in a row, dating back to the New England game.

The reason I wanted to focus on this zigging and zagging concept is because the San Francisco 49ers are the poster child for the zig.

Their front-four is very strong and it consists of almost all first-round draft picks. It also consists of a lot of depth. They are able to rotate guys in and out regularly How successful have they been?

The Ravens blitz an NFL high 50% of the time and get pressure on 22.4% of Qb dropbacks

How does that make me feel?

Translation: The 49ers front 4 is DANGEROUS.

However, lets take a closer look. They are no doubt the best front-four pass rushing unit in the NFL. It’s not even really close. However, they are a lighter group. D.J. Jones is the only player on their DL playing significant snaps that’s over 300 pounds. Guys like Nick Bosa, Deforest Buckner, Arik Armstead aren’t small (well relative to me), but they’re not the biggest guys at their position.

The focus of the 49ers is on speed and that speed approach has led to the best pass rushing unit in the NFL. They lead the NFL with 44 sacks through 11 games and they are ranked #1 in the NFL as a passing defense.

Here’s the kicker though: they’re only 19th in average rushing yards allowed. So the question is why? Well one thing could be that the focus on speed and pass rush up front has caused them to sacrifice a bit on the rush defense part. It also doesn’t’ help that they lost Kwon Alexander.

All of this to say, there’s a part of the #1 defense in the NFL that the Ravens can exploit. The poster child of the NFL’s zig towards beating a defense will meet the NFL’s zag offense.

Who will win? I can’t wait to find out.