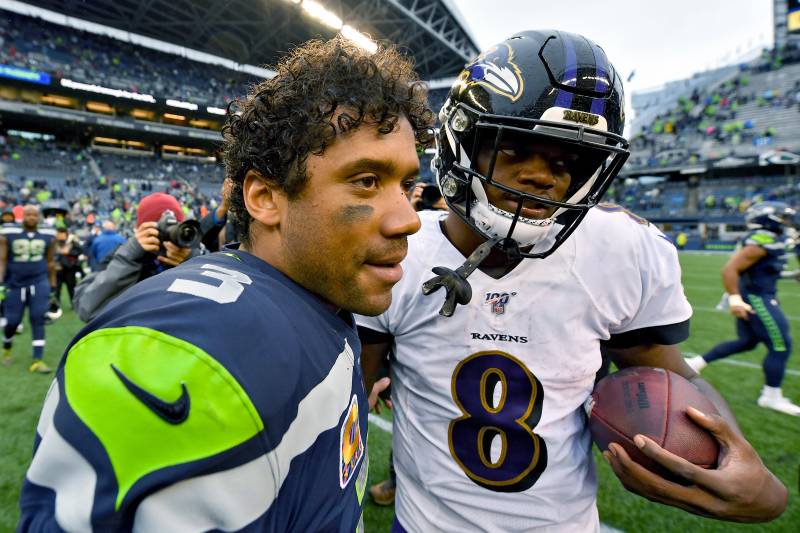 While scrolling through my Twitter feed and reading comments about the Ravens 12 Pro Bowl players named to the 2020 squad, I saw some chatter about the league MVP. One Seahawks fan rationalized while considering Lamar versus Russ, that since Seattle has only 1 other Pro Bowler not named Russell Wilson, that Wilson should edge out Lamar Jackson for the coveted award since Lamar’s efforts have been supported by 11 other Pro Bowlers.

The way I see it, the mark of an MVP is a player who more than any other player in the NFL, fuels his team’s success via accomplishment and by making those around him better. Lamar Jackson and his unique talents, spreads the field and in doing so, he opens up the running game for a Pro Bowler named Mark Ingram and he helps to create separation for receivers and tight ends by holding the ball a bit longer given his extreme escapability – like Pro Bowler Mark Andrews, for example.

Because of Lamar’s speed, elusiveness and ball handling skills, he forces defenders to hesitate and consequently, such hesitation gives his blockers like Pro Bowlers Ronnie Stanley, Marshal Yanda and Patrick Ricard a better chance to create leverage versus opponents.

And guided by Lamar, the Ravens No. 1 scoring offense (33.7 PPG) often takes the lead in games, sometimes a commanding lead, which allows defensive coordinator Wink Martindale to take liberties, understanding that opposing offenses are forced into being one-dimensional and abandon the run game. All of this helps Pro Bowl defenders such as Matt Judon, Marlon Humphrey, Earl Thomas and Marcus Peters.

As for the team’s other Pro Bowlers, Justin Tucker and Morgan Cox, moving the offense in position to score certainly helps their respective causes, don’t you think?

Here’s a Lamar versus Russ comparison:

I lost my Dad in May of 2018 and not a day goes by when I don’t think of him or one of his pearls of wisdom. He wasn’t a well-educated man but he clearly had a PHD in common sense and his heartfelt mentoring shaped who I am today. I miss him daily but he’s never far away and in a strange way, his legacy lies in the lessons I’ve learned and for me, they keep him alive.

I have no doubt that Rich Eisen will experience the same.

[Related Article: The Latest From The Media Watchdog]

Rich recently lost his Dad and the scars from the loss have yet to heal. But judging from this emotional ode to his father, Rich will be just fine. His Dad will forever be near.

To close out today’s show, @richeisen addressed the passing of his father Joel and, in his loving memory, made a request of us all: pic.twitter.com/qcDDeR4ysh

This is the time of year for reflection. It started back on Thanksgiving and continues right into the new year. For me it’s a time for sharing, a time to spend quality moments with those you love most.

The Lombardi Christmas Eve is busy. We host an early party and then venture to my sister’s home which is about a thousand yards away as the crow flies (ok, as the raven flies). Over the years, newcomers have joined in our gatherings and we welcome them with open arms as a new extension of our family.

I thought of those moments when I stumbled upon this touching 3 minute video that delivers a stunning message and clearly worth your 3 minutes. #EmbraceAStranger

The Spirit of Radio

If you’ve followed my column over the years, you know that I’m keen on music. I grew up during a time when there were so many great bands that captured my attention. But one great band that didn’t, a group that over the last 10 years or so I’ve developed a late-to-the-party appreciation for, is the Canadian trio Rush.

In closing out today’s column and in The Spirit of The Season (and Radio) here’s a Rush classic accompanied by a cleverly designed light show from somewhere in America.