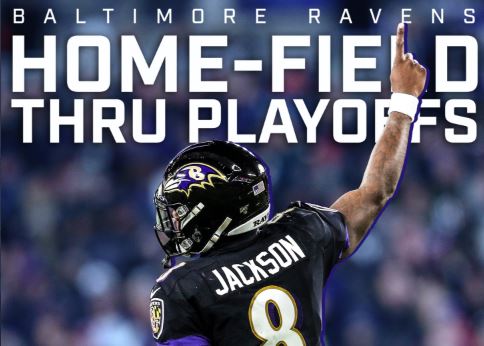 The Baltimore Ravens locked up the AFC’s top seed in the playoffs with a 31-15 win in Cleveland. RSR staff react to the win here…

I can’t even explain the emotions.

The Baltimore Ravens are the number one seed in the playoffs. The road to Miami runs through Baltimore. The Steelers lost to the Jets. This team is very good. The future is bright. I can’t say much more. This is incredible. Who saw this coming?

The Super Bowl comes through Baltimore! The Ravens got off to their slowest start since…well, since the last time they played the Browns. Meanwhile, the refs helped out the Browns with bogus fourth-down flag after fourth-down flag. However, Lamar and the offense came alive with two touchdowns in the final two minutes of the first half, including yet another one to add to LJ’s highlight reel, and the Ravens (mostly) coasted from there.

All eyes will be looking for news on Mark Ingram, but otherwise, it’s time to party in Charm City. This team won’t play a game that matters for three weeks, so hopefully whatever is ailing Mark can heal in that span.

Wow, we knew it was coming but it feels amazing now that it’s here. The Ravens are the #1 seed for the first time ever. Riding a franchise record high of 11 straight wins. Time to rest up and recover. Lamar has also set the record for franchise touchdown passes. Even the biggest Lamar supporters couldn’t have anticipated he’d be this good this soon.

— The postseason will go through Baltimore for the first time since 1971 when the Colts played at Memorial Stadium. The Ravens need to take advantage of this opportunity.

— Ravens quarterback Lamar Jackson padded his resume for league MVP. With the offense struggling, Jackson threw a pair of touchdown passes to Mark Andrews in the final 1:18 to take a 14-6 lead. Baltimore also got the ball and marched down the field to start the second half. Baltimore was never threatened the rest of the way. Jackson was 20 of 31 for 238 yards with three touchdowns (120.1 qbr). He also ran for 103 yards on 17 carries.

— Baltimore ran for a 243 yards even though the Browns were stacking the box and had played the Ravens already once this season. This ball-control offense makes the Ravens the most dangerous team heading into the postseason. Mark Ingram had 55 yards, putting him over 1,000 for the third time in his career.

— This is a special season. Enjoy.

Wow. Never thought I’d see the day that it’s all run through the Bank and the Ravens would have an MVP. The team (and refs) gave us a scare, but you have to be perfect to beat the Ravens. Cleveland certainly wasn’t that.