— Just one that could be considered a whiff: Buffalo. The Bills Mafia has to be sick after a complete choke job in Houston. After being up 16 points and cruising, they imploded and allowed DeShaun Watson to work his magic late.

An undefeated Wild Card weekend is all you can ask for. Had the Bills not done Bills things, it would have been a perfect 4-0 week. They didn’t unfortunately, but I’ll take the push.

Here’s how the numbers break down and the ATS rankings of the remaining teams after the Wild Card Round: 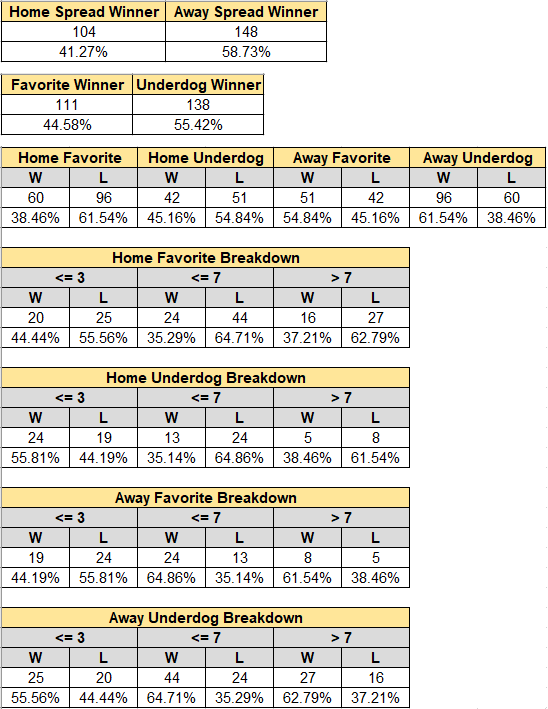 Here are my Divisional picks…

This week’s spreads are tough, in my opinion, starting with this game. With the way the Vikings played last week in their win in New Orleans, they have all the confidence in the world that they can go into the Bay Area and come out with a win against the NFC’s top team. That confidence can be directly attributed to their quarterback, Kirk Cousins. He may have had his “moment” last week as he walked into the locker room after their win and shouted his catchphrase, “You like that!” Those are the types of things that endear a quarterback to his team and allow him to be a leader. Let’s see this week if he takes that next step.

San Francisco could potentially be getting back two key pieces of their defense in Dee Ford and Kwon Alexander. Those two would be huge for this team, which struggled defensively over the last four weeks of the season, giving up 31.8 points per game. With or without their return, I do think the 49ers win this game, but the Vikings will keep it close enough to cover as San Francisco wins by a field goal to advance to the NFC Championship.

San Francisco is 3-5 ATS at home this season. The Vikings are 1-5 ATS in their last six games after consecutive ATS wins.

I don’t think you can understate the importance of the Ravens facing a team that hasn’t faced Lamar Jackson yet this season. Every team has said that they didn’t understand how fast he truly was until they faced him, and I don’t see that being any different this week.

In my mind, the ONLY way the Ravens lose this game is if Ryan Tannehill has a Playoff Joe Flacco moment and goes off on the Ravens (somehow). I think Derrick Henry will get his yards (over 100), but unless Tannehill produces through the air to the tune of 250-300 yards, I don’t think the Titans have much of a chance. The Ravens’ offense is too high powered and will be able to score points against a Titans’ defense that ranked 12th against the run during the regular season.

The other thing to watch out for in this game is mother nature. She has proven to be able to slow Jackson down as much as any defense has so keep an eye on the weather for Saturday night. If the weather is supposed to be nasty, take the under.

(Ed note: A few days ago, the forecast was for rain. Currently, it says 20% chance. The only certainty is that it will change again!)

If you take the two teams in this game and combine them with the forecast, this spread seems just about right to me which makes it hard to go one way or another. Both teams like to ground and pound so possessions may be at a premium. I have the Ravens winning by 10 so I’ll lean that way, but I wouldn’t be surprised if they just miss covering. Either way, I think we’ll have an AFC Championship in Baltimore next week.

You could have given me 13 points and I still probably would have taken the Chiefs here. They’re at home and looking to avenge their playoff failure last year. I think they take it out on the Texans big time this week.

The one thing that gives Houston a little bit of hope is that Will Fuller is expected to return this week. That gives their offense another weapon outside of DeAndre Hopkins to threaten a Kansas City defense that has played much better after their early season struggles.

At the end of the day, Kansas City’s offensive speed will just be too much for the Texans to handle and they’ll travel to face the Ravens in Baltimore next week for the matchup we’ve all been waiting for…

Although this game has the least amount of firepower this week, this one may be the most interesting to me outside of the Ravens game. Seattle is banged up, and Green Bay has looked like the most fraudulent 13-3 team I’ve ever seen, but your record is who you are right? There are so many questions around this game that it has me intrigued.

I at first had Green Bay here, but after looking through the numbers, I think Beast Mode can have a day against this Packers defense. The Seahawks should be able to run the ball effectively against Green Bay, which will open up the passing game for Russell Wilson to cover the four points, if not win outright.

Of the four games this weekend, only the Kansas City game stands out to me as one I would throw money at. The other three spreads seem to be just about right which means I’ll stay away. If you’re into betting the over/unders, I do like the Under in the Ravens game (assuming it rains), and the Over in the Kansas City game.

Good luck in the Divisional games!