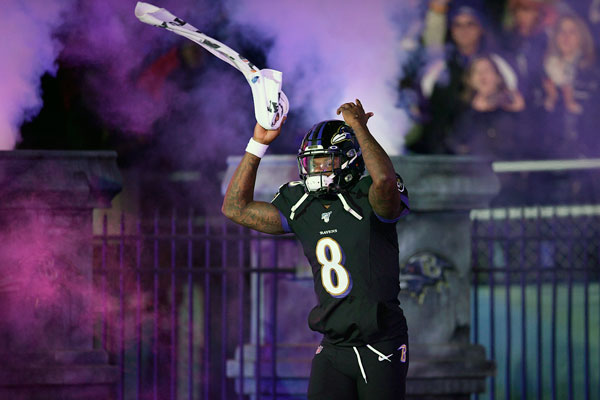 Each fan attending the game will receive an “Every Decibel Counts” Ravens flag upon entry to the stadium.

Baltimore’s offense will be introduced, with Pro Bowler and first-team All-Pro honoree QB Lamar Jackson coming out last. Once again, the Ravens will incorporate their new LED stadium lights system to create a unique sequence of lighting effects and a “blackout” moment. Fireworks will also be shot off from the stadium’s upper bowl ring just before kickoff.

Members from Baltimore’s School for the Arts will perform the national anthem. Additionally, 75 Ravens PSL Owners, who are all either active duty or veteran military servicemembers, will hold a large American flag on-field during the anthem.

Ravens Legend of the Game

Former QB Trent Dilfer, who helped lead the 2000 Ravens to the franchise’s first Super Bowl title, will serve as Legend of the Game.

The popular band O.A.R., which hails from Rockville, Md., will perform from the field-level Bud Light Touchdown Club during halftime.

The Ravens will be wearing their purple jerseys.

Bill Vinovich is the referee for the game.