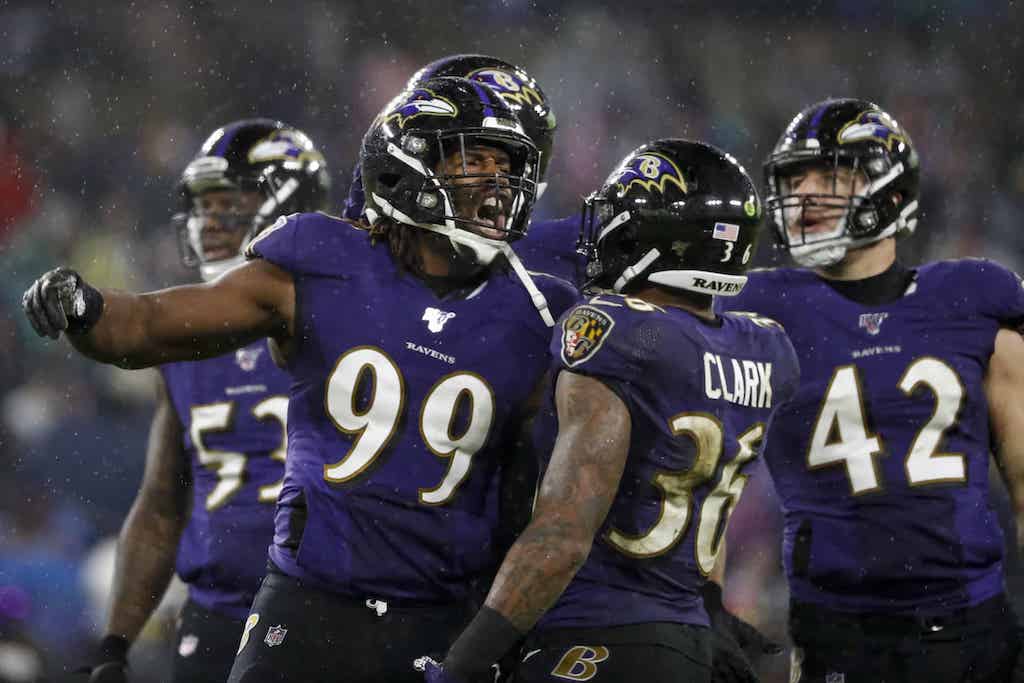 Ravens Run Defense Must Step Up

I hear a great deal of talk about how big Derrick Henry is and how much of a force he is going to be to stop for the Baltimore Ravens. I’ve seen some on the side of the Baltimore Ravens saying we have the edge. Peter Schrager of NFL Networks’ GMFB said this on that twitter thingy:

“As amazing as Derrick Henry has been – and yes, 182 rushing yards on a Belichick defense is as legit as it gets – @Ravens DC Wink Martindale crafted a game plan that held Henry to 21 yards the last time these teams played. There’s something awfully legit there, too.” – @PSchrags pic.twitter.com/MoPi1k5YZe

Ok, I’m getting off track. What I am trying to say is who is responsible for the big runs in the past and how can we be sure that it doesn’t happen again? I would like to visit both the Cleveland Browns’ week 4 matchup and the San Francisco 49ers’ game to see what the snuff happened during those terrible ground performances.

In week 4, Nick Chubb busted the Ravens for 165-yards and 3-TDs on the ground. That will forever live in Browns fans’ memories and comment rebuttals as “40-25”. Nick destroyed the run-defense, racking up 8.3-yards per carry. Sure, that was the game that let us know changes were needed and Eric DeCosta did his thing and brought in help. That help and Don “Wink” Martindale retooling the defensive scheme, personnel and green dot holder is what helped Big Truss go undefeated since then. But specifically, what went awry on the 88-yard romp that basically put the game away for Cleveland?

After looking at the film on the play (4th Quarter, 9:35 mark), it was easy to see the Ravens were in a 3-4 under set, that is primarily used to contain. The only issue with that is there is vulnerability for RBs to break inside and bust you up inside the tackles. In this situation, Chubb managed to get outside but due to a pulling LG, C and RG, he was able to find a crease between the TE and what appears to be an extra lineman, allowing the offense to sell out completely to the run on his jail break. Basically, due to Chris Wormley getting sealed off and Patrick “Peanut” Onwuasor over-pursuing, the defense got caught with their pants down.

Nick Chubb 88 yards to the HOUSE. His 3rd TD of the day. pic.twitter.com/QNQTDnUpGx

Moving on down the road, there were needed personnel and green dot changes implemented to sure up the rushing defense. Peanut was benched. Tim Williams was released. Tyus Bowser was threatened. L.J. Fort and Josh Bynes were both signed, Marcus Peters was acquired and the green dot was moved over to Safety, Chuck Clark.

But did the bleeding stop?

For a short period, the bleeding did stop as the team only surrendered an average of 72.5 yards per game through the next 4 games. That was unfortunately short-lived as the D opened up the flood gates to Joe Mixon and he romped us for 114-yards on the ground in week 10. Yes, I know the Ravens won and Joe’s longest run on the day was 15 yards, but we’re talking about a team that prided themselves on going entire seasons without not allowing a 100-yard rusher. Where is that pride?

Wink must have pulled his belt off afterwards, because they held Carlos Hyde (65) and Todd Gurley (22) under 100-yards in the following weeks.

Which brings us to Week 13 when the Ravens faced off against the NFC’s current No. 1 seed, the San Francisco 49ers. Raheem Mostert rumbled on the D, getting 146-yards on the day in the nasty rain and cold. Raheem was pretty much held in check until the 2nd quarter where he broke for a 19-yard run, followed by a 40-yard and an 18-yard run in the 3rd. Let’s talk about that TD-run.

It appears Wink and Chuck have the team lined up in a 4-3 under, once again facing a heavily stacked formation to the strong side. It caught Clark’s attention, as he moved up very close to the line. It appeared the defense had the right call with eight in the box but TE George Kittle absolutely mauled Jaylon Ferguson opening up the outside alley for Mostert. Combine that with three missed tackles and you get the resulting disaster.

Fast-forwarding to the Divisional Round. Henry is a guy who likes to run between the tackles but has the speed to expose the Ravens on the outside just as Mostert, Mixon and Chubb did. Maybe Jaylon Ferguson is the key. Should he play less snaps on first and second down and be replaced or at least spelled by the heavier Jihad Ward?

Whoever is filling the outside role needs to be able to hold their ground. Baltimore is not looking to slash or maneuver past an O-lineman to get into the backfield, they need only to plug the hole using the man in front of them to their advantage. This approach should help sure up the vast daylight created by a lack of fundamentals. The Ravens still need to beat the man in front of them while securing the C-gap and/or the edge.

If the team does not focus on winning one-on-one matchups on the edge or on heavier packages, this could be a long day for the Ravens.

And possibly the last in a season that up to now has been unforgettable.