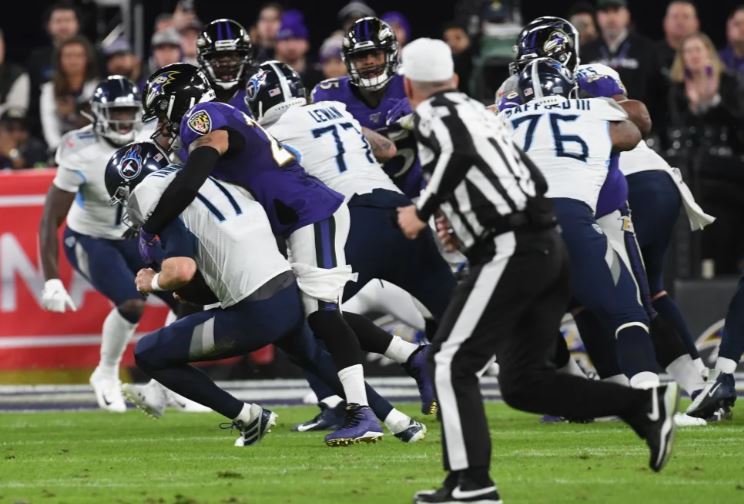 The Ravens fell to the Tennessee Titans 28-12 in the divisional playoff round. RSR staff react to the loss here.

Such an amazing season with so many records broken all to have our hearts broken. Ultimately this season will be remembered for the huge disappointment.  It’s the 2006 season all over again. The Ravens beat themselves with stupid mistakes and many drops that could’ve been big plays. They have some serious fuel for next season and hopefully this will be remembered like the 2011 season instead of that 2006 season.

The Ravens put together a record-setting offense, earn the #1 seed…just to be ushered out of the playoffs by Dean freakin’ Pees. The football gods are so very, very cruel.

I’m not sure what I just watched. Greg Roman suddenly turns into Cam/Marty at the worst possible time (NINE runs by running backs in a game that was 14-6 at halftime?!), the rested Ravens heavies get pushed around by their opponent on both sides, a defense that’s managed a takeaway in every postseason game in their history can’t find the ball, the pre-Week 5 run defense is back, the NFL MVP can’t pick up a half a yard on 4th and 1…

From the moment that pass bounced off Mark Andrews‘ hands and into Kevin Byard‘s, and then Jonnu Smith pulled that catch out of his rear end on a 3rd-and-goal from the 12 to make it 7-0, it was easy to see whose night it was going to be. Things snowballed from there.

Sports. They’re the damn worst, most of the time.

— Going into the playoffs, I thought that it wasn’t quite the situation that anything short of the Super Bowl was a disappointment. To lose to the 6-seed in the first playoff game, regardless of how hot they are, makes this season feel disappointing.

— The great but occasionally frustrating thing about sports is that there’s so much parity year-to-year. Who knows when the Ravens will have such a golden opportunity to win a third title? This team has a lot of promise and room to grow, but that’s the scary thing about this loss.

It wasn’t the result we wanted or expected but it the one we got. Regardless of what happened today, this season was an unquestionable success and a giant step in the direction of something potentially special.

As good as this team has been they are still flawed in some areas. Flaws that they have draft picks and an uncharacteristic amount of financial flexibility to try to shore up.

This one will sting for a while but don’t lose sight of the position this team has worked itself into…a favorite to come out of the AFC every year for at least the next few years, if not longer.