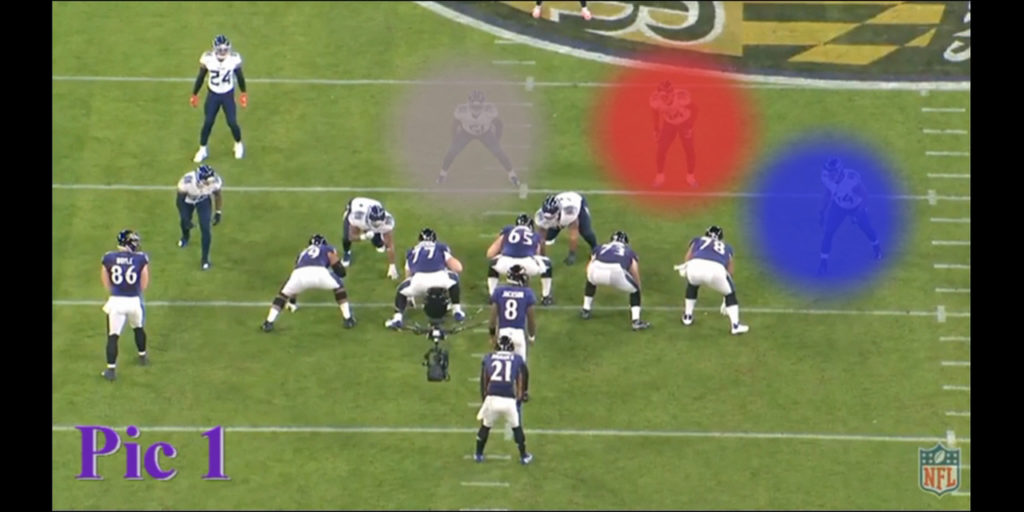 It took me at least two weeks to move on from the end of the Ravens season.

This was a glorious, entertaining year for Ravens fans. Highlighted by breathtaking plays from Lamar Jackson and a quietly improved defense toward the end of the season – bolstered by savvy pickups by GM Eric DeCosta – 2019 was an incredible ride.

14-2 record. A number one seed in the AFC. A record-breaking rushing attack. And a 23-year-old QB with a humble demeanor and “we” mentality. 2019 was historically good for the Ravens.

2020 quickly turned into a wake-up call.

Part of that was the Ravens’ seeming lack of preparation and sloppy play; a lot of it had to do with the Tennessee Titans’ physicality, personnel, and a defensive plan that left Baltimore fans in shock.

It took me a while to not only get over the loss, but to understand how the Titans did it. Sometimes what I perceive during the game isn’t how things look on film 24 or 36 hours later. I decided to take a look at 10 of the Ravens’ run plays from the first half  (when they were still in their “base offense”, not the Spread formations that resulted in so many second-half passing plays).

I wanted to examine how Tennessee stopped, or at least slowed down, the early-game rushing attack.

This video breakdown consists of 10 running plays from the first half, specifically showing how the Titans defended the Ravens’ Option and Power concepts. Obviously, the Titans defenders didn’t recognize option or power instantly; but their defensive ends’, inside linebackers’, and safeties’ reactions to Baltimore’s base backfield action (where Lamar opens up to one side or the other out of a Pistol backfield) was clearly something Tennessee had a detailed plan for.

The Titans defensive ends – and outside linebacker/stand-up linebackers in their 4-2 Nickel look – were clearly coached to “Step Down” when the Offensive Tackle or Tight End inside of them “Blocked Down.” Block Down-Step Down (or BDSD) theoretically takes away the Dive portion of the Option play. This would force the QB, Lamar Jackson, to keep the ball and run out the next phase of the Option. The Ravens don’t currently run any version of Triple Option, so the second phase – Lamar keeping the ball – is the end phase. The Titans wanted to get to that phase, turning every Option play into an example of a Pursuit Drill.

Simultaneously, if the run play is Power – where the play-side defensive is initially left unblocked – BDSD is a concept that can also defeat that scheme. If the DE were to run upfield when he’s unblocked, a kickout block would open up a lane for the pulling backside guard and running back with the football. However, thee Titans’ ends and OLBs consistently stepped down to close off or squeeze those open gaps on the end of the Line of Scrimmage. Power did hit big on at least one occasion, but the stepping down by the ends condenses the hole often enough to clog things up, and dissuaded Greg Roman from calling Power run plays in the second half.

Block Down-Step Down is a tried-and-true technique that defensive ends and OLBs have been taught for decades. And it served the Titans well in this remarkable upset.

Concept #2: “Force Lamar to keep it & run to the sideline”

This sounds dangerous. Force Lamar Jackson to keep it? The guy who’s averaged 5.9 yards per rush and totaled 1,901 yards with 12 TDs over his first two seasons? This isn’t what the Ravens’ saw from most opponents during the regular season, when the modus operandi seemed to be “force anyone but Lamar to beat you.” The Titans flipped the script, and well…it worked.

Forcing a “Keep” read – again, by the unblocked DE stepping down to take Dive – resulted in a number of horizontal runs that went for minimal gain, or even losses. Plus, on the ensuing play, Lamar might have to diagnose the coverage, and find the open man. So, thirty seconds after reading the Option correctly (tough to do in real-time) and trying to find a running lane with the Titans defenders swarming, Lamar has to get the protection straight, then figure out the coverage and find the open receiver. Oh, and deliver the football. Oh, and deliver the football with accuracy.

It’s a lot to ask of any QB. Let alone a 23-year old in the National Football League, a place notoriously hard on running QBs. Don’t get me wrong: I think Lamar Jackson’s up to the task. He’s ahead of the curve; 10 years from now, I believe there will be three or four teams running their offense with some level of option at its core, either a Zone Read scheme or Veer/Midline concepts.

These two interrelated concepts – BDSD and trying to force Lamar to the sideline – helped prevent vertical seams in the C and D Gaps. Lamar (nine yards on Option) and Gus Edwards (19 on 1-Back Power) each had burst runs on the opening drive, but that was it. The Ravens’ first half rushing stats were – by my calculations – 15 rushes for 54 yards. And that’s including the aforementioned runs by Lamar and Gus that totaled 28 yards on two carries.

The other 13 carries in the first half registered … twenty-six yards.

The Titans absolutely slowed down the Ravens running game in the first half. There’s no doubt the play-calling after halftime was questionable, but it was a reaction to the lack of success running the ball in the first half. Tennessee definitely came in with a plan and made sure that plan worked.

Here’s a split-screen examination of two run plays highlighted in the video, one of which illustrates Block Down-Step Down with a Gap Exchange by the ILB (Play 1, from 2:45 to 3:09 of the video). The other play shows Tennessee’s preparedness versus the Ravens’ Diamond formation, along with confusion by at least two Baltimore blockers (Play 2, from 1:53 to 2:39 of the video).

This is an Option play at the 2:56 mark of the video, with # 86 Nick Boyle in motion. I believe Boyle is reading the DE, # 44 Kamalei Correa, in the same manner that Jackson is. Pic 1 shows the formation and the Read Man (in Blue) while ILBs Rashaan Evans and David Long are highlighted in red and gray. 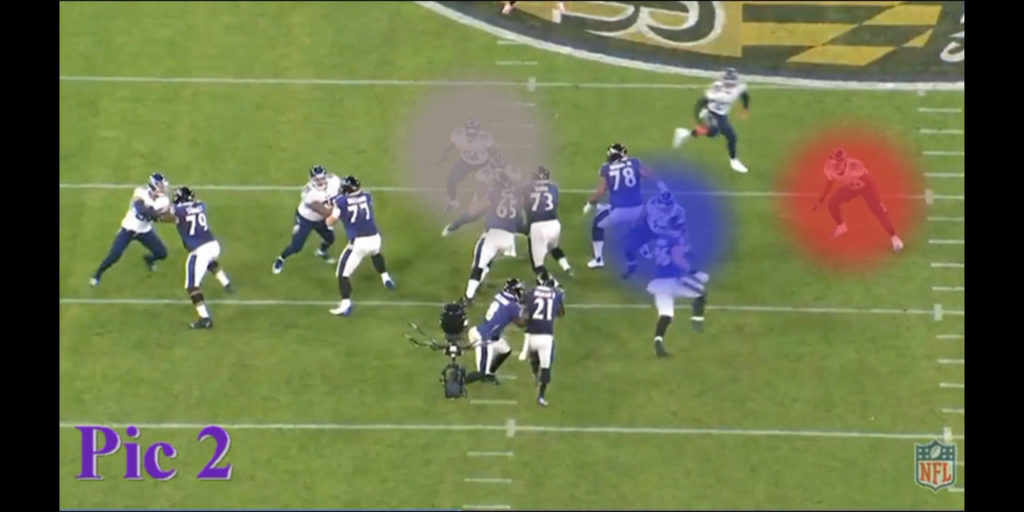 In Pic 2, Boyle and Jackson have both correctly read “Keep” as Correa steps down hard, to take away the Dive (Ingram). Correa has Stepped Down when the offensive tackle he was lined up on, Orlando Brown, blocked down – “Block Down-Step Down.” Lamar is forced to keep it, while Boyle sees Correa close down, and loops around him to take the frontside ILB, #54 Rashaan Evans. 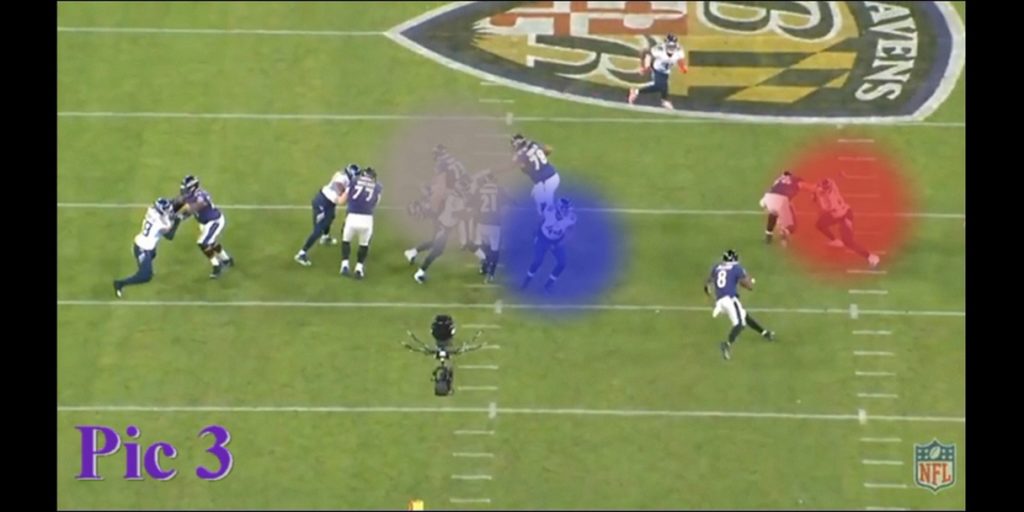 Evans is executing a gap exchange with Correa in order to take QB, and Pic 3 shows Evans deftly evading Boyle’s block. Evans not only forces Lamar inside, but helps make the tackle as Lamar tries to turn upfield and find a seam. It should also be noted that Correa, who initially stepped down to take away Dive, pursued inside-out to get involved with the tackle on Lamar. 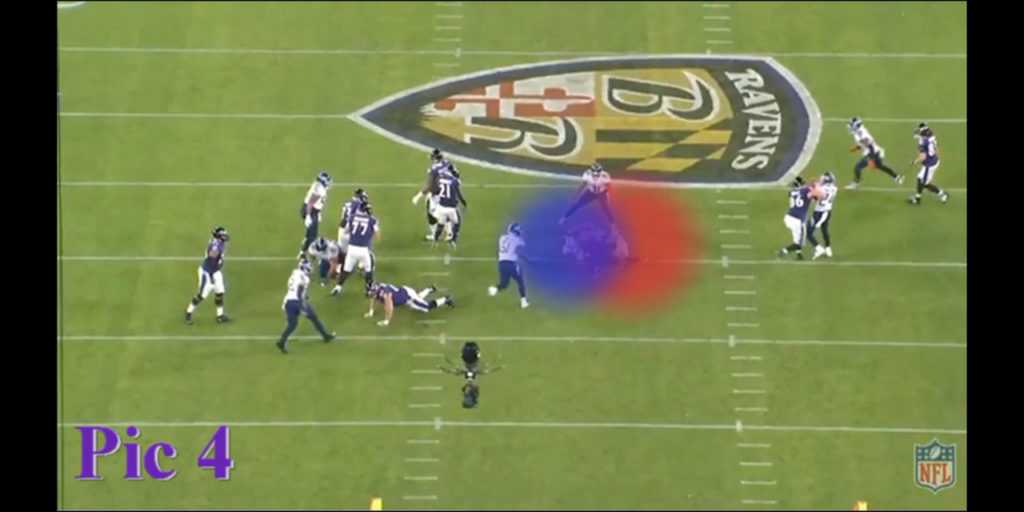 Pic 4 shows Evans and Correa on the ground (mashed up Red and Blue) after getting Lamar down for a 4-yard gain. On a 1st and 10 play, that’s a win for the Titans.

At the 2:12 mark of the video, here is a play that actually does not illustrate Block Down-Step Down principles. However, what it does show is the extremely detailed plan that Dean Pees put together.

As the Ravens motion to their Diamond formation, pay attention to ILB’s #54, Rashaan Evans – the Frontside ILB – and #51, David Long, the Backside ILB. I believe this play is Midline Option, since Edwards runs straight down the middle of the formation as Lamar reads #98, Jeffery Simmons, and decides whether to give or keep the football. Based on alignment, it looks like it should work, with Tennessee’s ends lined up wide. 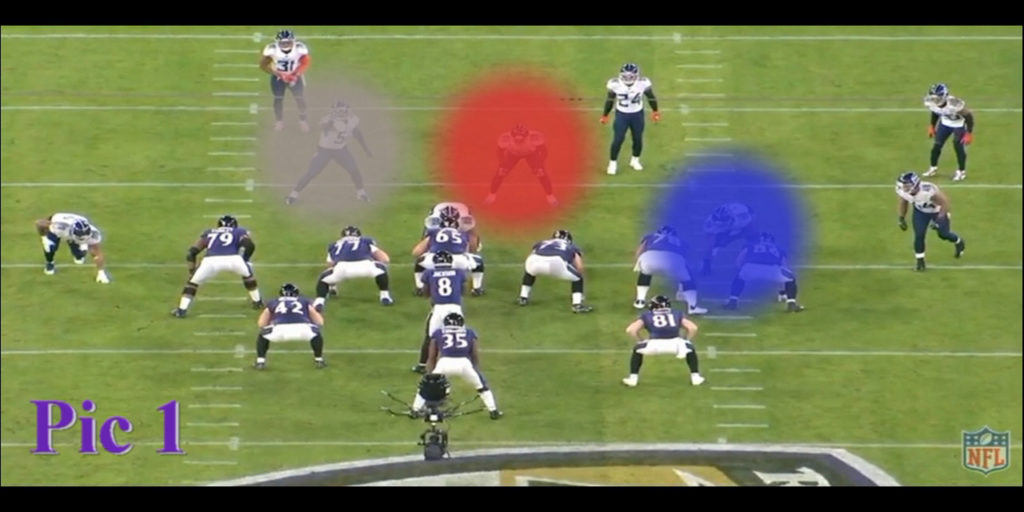 Pic 1 shows the formation, with Evans (highlighted in Red) on the Offense’s right, along with Simmons, the “read” man (in Blue). Long (in gray) is the backside ILB and is either pointing out Ricard’s tighter alignment as compared to Hayden Hurst OR he’s calling “Diamond” and communicating to Evans the stunt they’re about to run. (Note Ricard’s inside foot being closer to the Midline than Hurst’s corresponding inside foot, as well as the difference in depth between the two of them, with Hurst lined up deeper.) 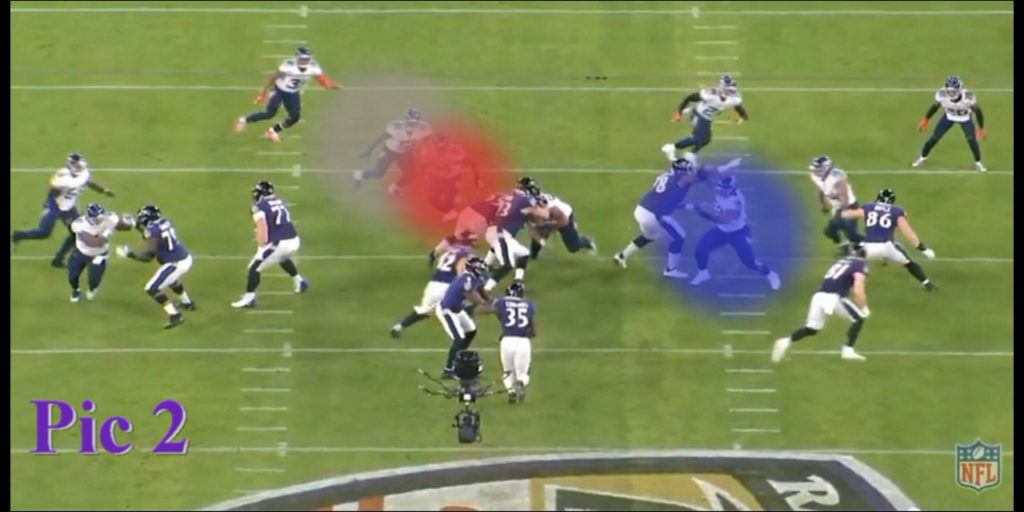 In Pic 2, Simmons steps upfield and Lamar – along with Ricard – correctly reads this as a “Give” to Edwards. Ricard bypasses Simmons, who lined up in a 5-technique and can’t tackle Edwards since he didn’t squeeze down enough, and Ricard now works up to the frontside ILB. This is where the Titans’ plan comes in to play. Pic 2 also shows Evans (in Red) running an X blitz, crossing the midline to go A Gap on the Offense’s left. Doesn’t matter, right? Since that’s away from the play. 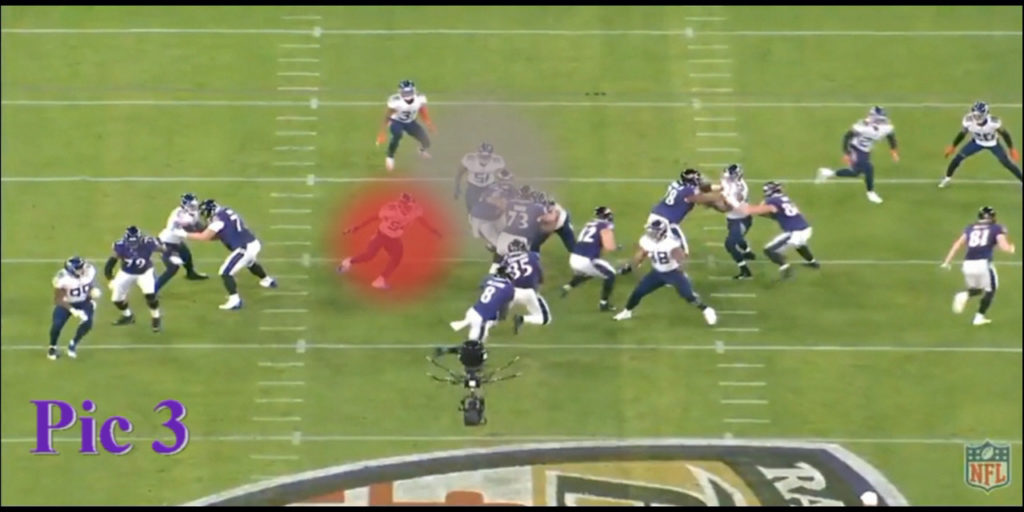 Wrong. In Pic 3, we see Ricard reacting to the “Give” read. On this play – I’m calling it Midline – his assignment is now the frontside ILB. Well, that’s Evans, who has disappeared and is now backside. This is a designed X Blitz between the two ILBs, and it worked perfectly. 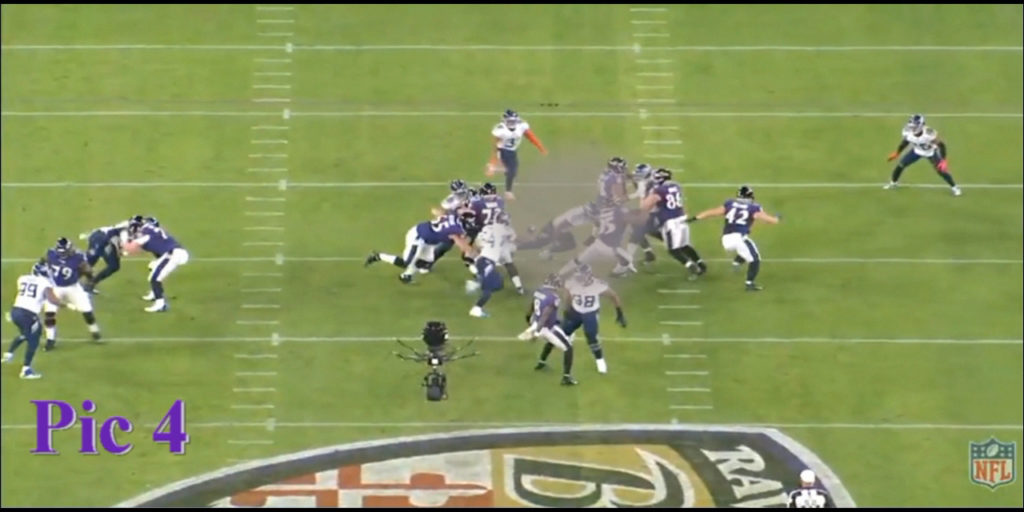 Pic 4 shows Long, who has crossed the midline, as he is making the 1-on-1 tackle versus Edwards for no gain. They saw something, either in Ricard/Hurst’s alignment … or in the Diamond formation itself  .. and decided to sell out on Option to the defense’s left.

What if it had been a run to the defense’s right? Well, Evans would’ve been a bonus guy at the point of attack. This call was a good one against Option, to either side.

But the Ravens also messed up the blocking scheme here, in my opinion. Brown steps to the read man, Simmons, even making contact with him. And LG Bradley Bozeman blocks … a backside OLB … one who lined up wider than the backside DE. I would think his blocking rules would take him to the backside ILB (Long) since Pic 1 shows NO ONE in A Gap or B Gap to Bozeman’s side.

Either way, someone – Brown, Bozeman, anyone – has to block an ILB since those are the guys typically responsible for the “Dive” phase.

In any case, the Titans call – a designed X Blitz with a Give read by the DE – stopped this play cold.

I hope this video and two-play illustration shows how the Titans used an old-school technique, Block Down-Step Down, to limit the Ravens base run concepts. I believe it was the Titans’ main tool in breaking down Baltimore’s patented two run plays, Option and Power.

The Ravens can be sure they’ll see teams try to copy this plan during the 2020 regular season, and Greg Roman & his staff need to spend the next few months coming up with ways to counter it.