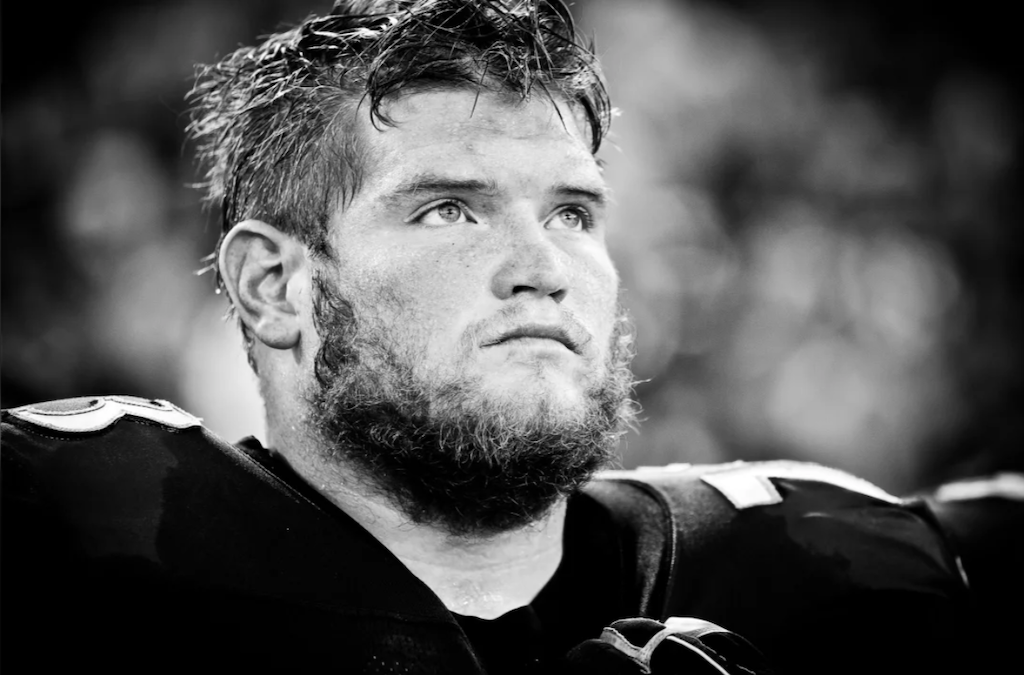 Marshal Yanda Tribute: From Those Who Know Him Best

The accolades for Marshal Yanda continue to pour in from teammates, coaches and opponents. And deservedly so. What’s not to like about this man who exemplifies excellence on the field, excellence as a man, a friend, a husband, a son, a brother and as a Dad.

After seeing, hearing and reading the outpouring of affection that Marshal has earned, we’re all left both sad and happy. Sad because we are forced to say goodbye, for now. But happy that Marshal can walk away on his own terms, at the top of his game. He’s set for life financially and can now enjoy his family to the fullest at the age of 35.

I thought to compile this Marshal Yanda tribute, a bookmark in time, if you will – an ensemble of the most heartfelt quotes that individually and collectively pay homage to Marshal John Yanda. But before we get there, first a few words from the man himself…

“We had a lot of success early on in my career. We made it to the AFC Championship Game in 2011 only to come up short and had our hearts broken by the Patriots. I still remember the feeling in my heart that we … There was a play where we had a feeling like we were going to win the ball game. I remember me and Matt Birk were hugging each other, thinking that we were going to the Super Bowl in that moment, only to have that ripped away. That was the worst loss I had ever had to deal with in my career, but I truly believe you have to go through adversity to truly achieve greatness. We were molded and hardened by those tough losses and were better people and players because of that adversity.

A Thank You to The Fans

To the fans, [the] Ravens Flock: I can’t think of a better place to spend my entire career. You embraced my family and myself, and I can’t thank you enough for that. This team is a reflection of this city – hardworking, passionate, blue collar and committed. We couldn’t have been the team we were without you. Thank you for your support. Thank you for your investment in us. It was an honor to play in this great city, Charm City. 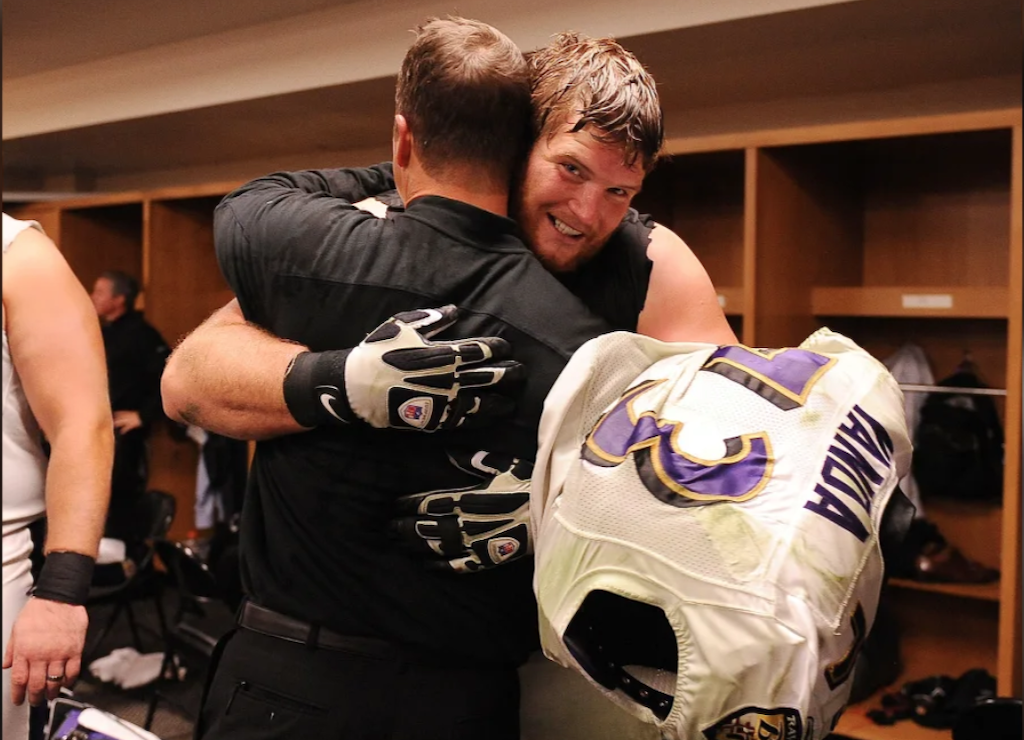 On Filling The Shoes of Marshal Yanda

“Oh man, that’s a tough one. I mean, I think we’re open for suggestions if you all have any suggestions. (laughter) But you can’t replace a guy like Marshal. As great a player as he his, he’s a better person and a leader by example day-to day, and the other guys see that. They feed off of that. It becomes contagious. You can’t replace that overnight. You hope you hit on some guys at some point who could become that guy, but that’s like a once-every-10-years type of guy.” ~ Eric DeCosta

“There’s a phrase in this organization: ‘Play Like a Raven.’ If I had a billboard and could post it somewhere, on [Interstate] 83 or somewhere near the stadium, and put players on there that I felt like played like a Raven, Marshal Yanda would be one of the first to go on that list. He was tough, competitive, smart and had a unique respect for the game as well as his teammates. I just want to congratulate you, Marshal, on a great career, and I know sometime in the future, as I have been told, you will be getting your mail in Canton.” ~ Ozzie Newsome

“It’s difficult to put into words just how much Marshal means to me, because he’s been so significant in my development as a pro. I can’t thank him enough for everything he’s done for me, let alone the game of football. He’s a first-ballot Hall of Famer as a football player, a father and a friend. I’m very happy that he’s able to walk away on his own terms with a healthy body. I know he’s pumped to spend the days ahead with his kids and wife. I pray for many more blessings for him and his family.” ~ Ravens T Orlando Brown Jr.

“Marshal is one of the best I’ve ever played against. A consummate professional who gave everything he had on every play and then shook your hand with respect after the game. He was an absolute pain in the ass to play against, but he’s a true competitor that I have the utmost respect and admiration for. Congratulations on one hell of a career and wishing him all the best in retirement.” ~ Texans DE J.J. Watt

“Yanda is a legend and someone I’ve admired since the day I started playing this game. I have always loved playing against him and have learned so much from him. He played the game the right way, and I’m happy and excited for his next chapter. I wish him, Shannon and their entire family nothing but the best.” ~ Jaguars DE Calais Campbell

“When I came into the league 10 years ago, before I played against Yanda, I was told to keep my head on a swivel, because No. 73 was always looking for more ‘work.’ D-ends will know what I’m talking about — the cleanup blocks and the rib shots throughout the entire game. After playing against him, I respected it because it was only between the whistles. That was his nature — to compete and do his job every play, then go see where else he could fill a void and help his team. He was a great player, competitor, opponent and pro.

“Happy retirement! After a decade, I am looking forward to not having to look out for you!” ~ Bengals DE Carlos Dunlap

“Marshal dominated the guard position for over a decade in the NFL. I enjoyed competing against him because of the way he played the game: tough, smart, and physical! Our Steelers/Baltimore matchups were legendary because of the war that was going on in the trenches. We brought out the best in each other because of what was at stake – the [AFC] North [Division] and a chance at the Super Bowl! Congratulations, Champ, on a job well done and a fantastic career!” ~ Former Steelers DE Brett Keisel

“Marshal Yanda was the teammate who defined accountability. He was the part of the engine that made the offense go and was always a leader with his actions. I love Marshal Yanda. I love him for being a great man and love him for coming to play football every day. Congratulations on a legendary career.” ~ Ed Reed 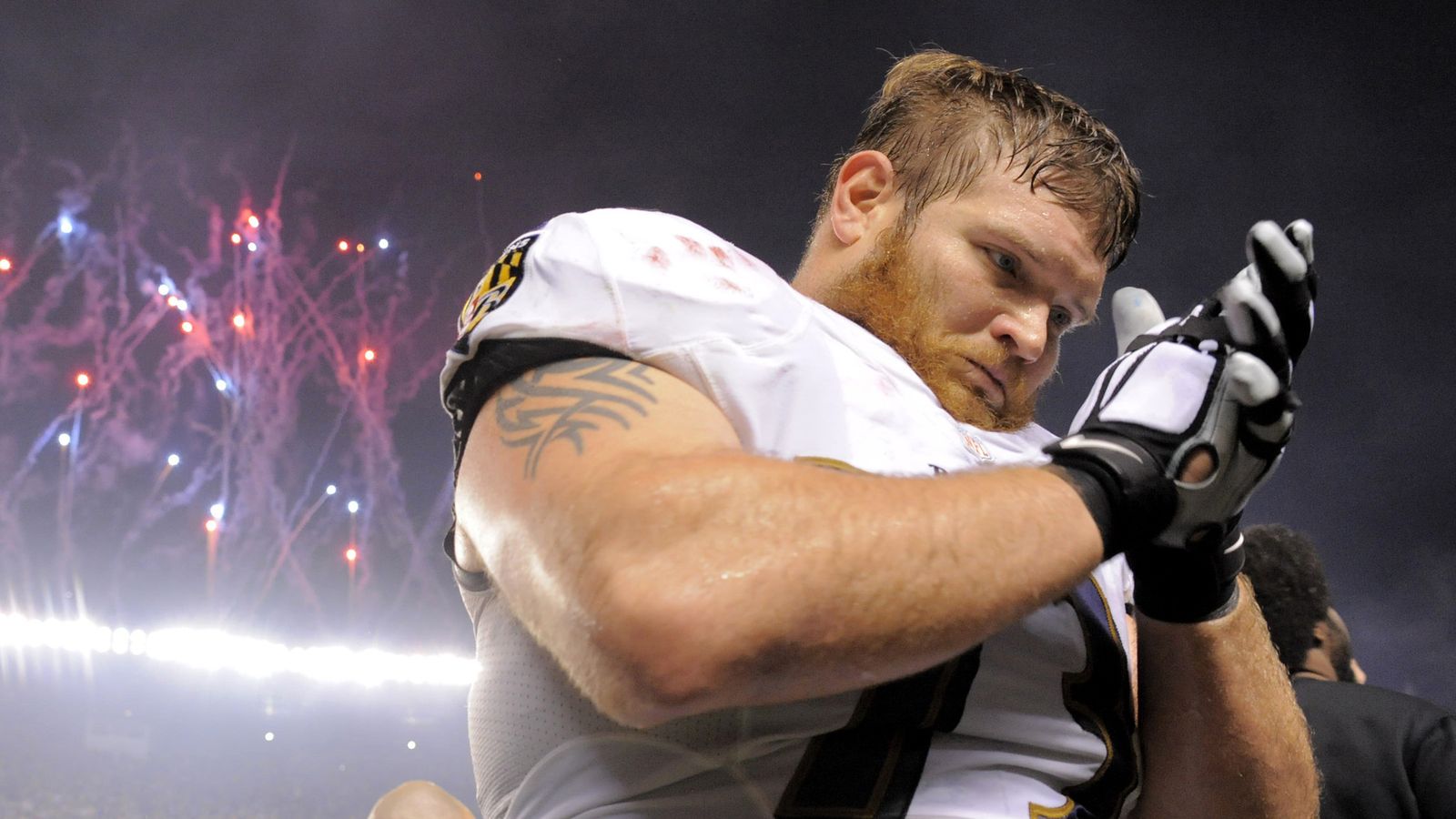 I’ll miss Marshal Yanda but at the same time, as a fan, I feel great gratitude for him and I’ll cheer for his future away from football. Sometimes you don’t know how special something or someone is until they’re gone. Ravens fans are all blessed that Marshal came along. God bless him and the family that supported him throughout his career. Here’s to their future happiness away from football.

I leave you with this outstanding video montage honoring Marshal, from the Ravens excellent digital media group. It’s really worth your time.

Here’s to the memories.

Marshal’s family, teammates and coaches congratulate him on an amazing career. pic.twitter.com/mBAPryMkxx