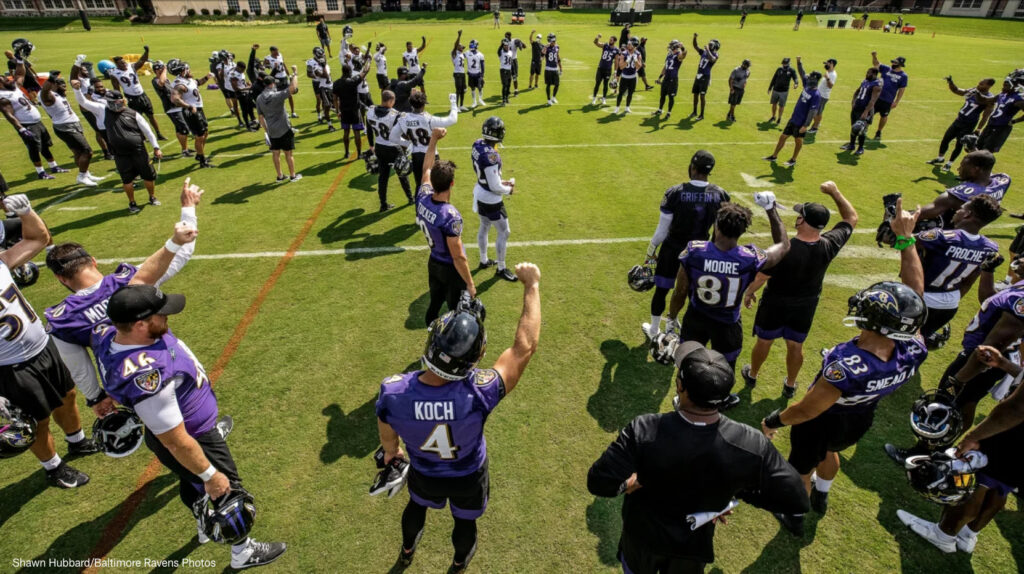 I’m not a leader of men. My reach isn’t widespread enough to make such claims and even if my influence was greater, I’m not convinced that I qualify to be a leader. Yet for those I do reach, I feel compelled to at least share a perspective that I hope shines a light on a way of thinking that may have escaped you. And rest assured, I’m not judging.

I don’t have the answers but I’m willing to try and break down barriers that may impair my ability to see the world more clearly. Not my world, the one we share.

My hope is that you all receive this article with the good intent in which it is being delivered.

Back in 2003 I built a website called Ravens24x7.com. By 2005 I managed the site as a full-time job. I chose to try to make a living doing something that I loved.

At that time, I felt that if I could make it work, our product would represent fun for all site visitors. It would represent a welcome distraction from the daily challenges that life presents us. And I also believed that by filling a void in the local sports landscape, that ours would be a business that dodged the ebbs and flows of the economy. After all, regardless of a bull or bear market, sports have a galvanizing effect that is immune to economic or societal woes.

Or so I thought…

Today I’m struggling to write this piece. Part of me simply wants to put my head down, do what we do best and let the world fix itself. But our country doesn’t have leadership that brings people together. Instead, our so-called leaders are divisive, intoxicated by their respective agendas. Consequently, the divide widens, hostility builds and more violence emerges.

Professional athletes are paying attention. Some may be in a sports bubble but in the world they are not, particularly as is relates to social injustice. They understand their notoriety and given the absence of effective leadership, some have decided to leverage their platforms to enhance awareness of what many refer to as systemic racism.

I understand the push back from many Americans. Most view sports and other forms of entertainment as a comforting distraction. Now, that once treasured oasis in a complex world, has added to the complexity. Celebrities are demanding action, seeking solutions, yet none break the horizon. The games, the movies, the music all take a back seat to social reform. The oasis has gone dry. Frustrations continue to climb.

Yesterday afternoon I tuned in to NFL Network to learn about training camp developments league-wide. Instead, there was more talk about the tragic events in Kenosha, WI. My knee-jerk response was to change the channel. I can’t even go to NFL Network now without being bludgeoned with the topic of systemic racism?

But I calmed down and decided to listen to what Steve Smith, Sr. had to say.

I watched as Smith shared his views. And then I watched it again. He opened my mind to a different perspective. And while I wish things were different, I now have a better understanding as to why athletes choose to use their platform to raise awareness and more importantly seek change.

The trouble is that so many are entrenched in their respective positions on the issues that confront us all, that they aren’t open to other perspectives and theirs of course, is the right one. It’s as if out of fear, we dig in deeply so as not to lose our ground on our side of the ever-widening gap that separates us. Compassion and empathy for opposing viewpoints are dead on arrival. And then nothing gets done. So, we wait things out until the most recent incident of race-related violence is no longer newsworthy. And then it happens again. Rinse, repeat.

I don’t know what the solution is to mend our extreme social discord. But I do know that if you are unwilling to listen to and think through an equally strong yet polar opposite perspective than your own, nothing good will happen. We can’t grow. We’ll stagnate and then rot as a community.

I don’t think either side of this divisive topic is completely right or completely wrong. But someone or something needs to bring us together. You see, there’s this thing called compromise.

Compromise is viewed by some as a sign of weakness. Yet it is said that the best negotiation is one in which no side wins, because then, we all win.

“We must be willing to learn the lesson that cooperation may imply compromise, but if it brings a world advance it is a gain for each individual nation.” ~ Eleanor Roosevelt

Maybe instead of digging in, we should all dig out. Then, leaders may emerge and navigate us towards a more harmonious future. But it all starts with a willingness to understand.

I’ll leave you with this unforgettable scene from Remember The Titans, the setting of which was 1971. Here we are nearly 50 years later, repeating the same mistakes.

Isn’t it time to learn?