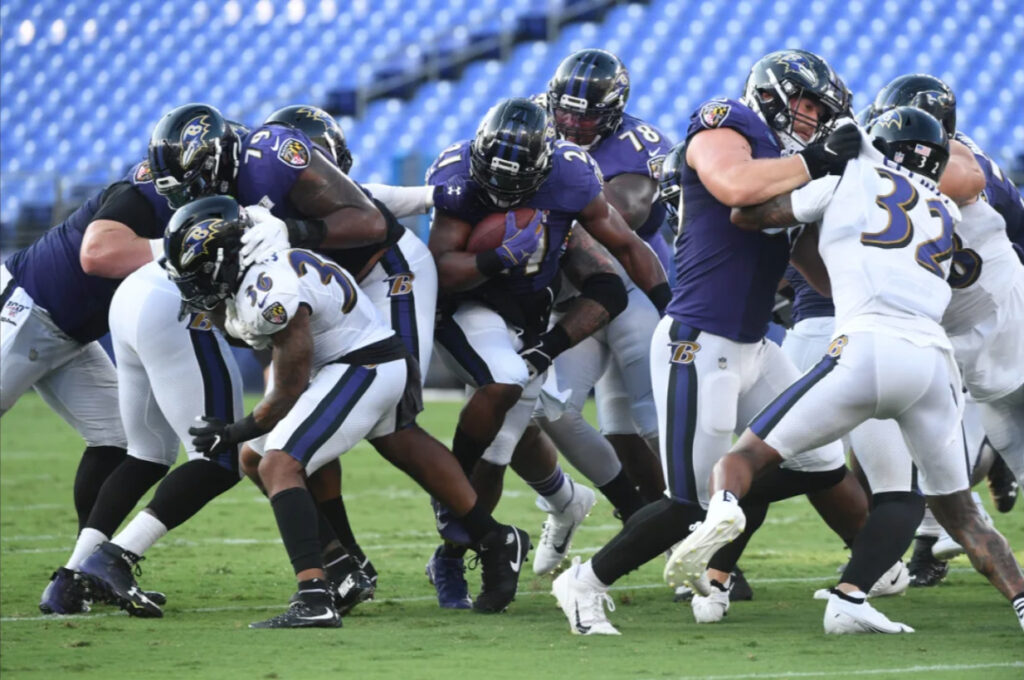 Cuts and Cutouts Both Triggering Pain

It’s hard to believe that it’s September 1 and the official start to the 2020 NFL Season is just 9 days away. Clearly it has been an unusual year that on one hand feels like it just started and on the other, feels like a decade in and of itself. But here we go – it’s football season.

NFL coaches have a discerning eye. They can project practice field accomplishments to game day – most of the time. But this season has new challenges that fall outside the parameters of coaching experience.

In the past we’ve seen summer practice heroes. We’ve seen preseason All-Pros. And oftentimes, said players are barely blips on the regular season radar. When the bright lights of meaningful games shine, those great summer performers can suffer from stage fright and fade away like the Bay City Rollers.

This season, the coaching challenges are exacerbated by the lack of contact both in practice and in the preseason and consequently, players are not in football shape. Their bodies aren’t used to absorbing the blows of live NFL competition and that makes roster formation a daunting task. It’s also likely to create a backup at cold tubs on September 14.

To help shape the roster, enter Eric DeCosta. The Ravens GM is a forward thinker and given the brain trust available to him at The Castle, there’s little doubt that they will tackle the new roster rules with a pioneering spirit.

Practice squads have been expanded to include 16 players and of those sixteen, teams can store up to 6 players regardless of their number of accrued seasons. Moreover, teams can protect up to 4 players on their practice squads so that other teams cannot poach desirable players. However, there is a window of opportunity for poachers that will exist between the end of a team’s game and 4PM on Tuesday.

This coupled with new IR rules that allow teams to store an unlimited number of players on Injured Reserve, offer a few wrinkles that the Ravens progressive front office may be able to massage in their favor.

The Ravens recently parted ways with OLB John Daka. Daka was a UDFA out of James Madison and showed promise at the Colonial Athletic Division school. But Daka didn’t show the explosiveness against more talented competitors like he did as a JMU Duke. He’s a one-trick pony who needs some development in his repertoire and in the weight room. He was hardly menacing to QB’s in camp and at 224 pounds (listed), one would hardly expect him to be equipped to hold down the edge against the run.

By most accounts, Trace McSorley has had a weak training camp. At times he’s looked lost and he’s pressed quite a bit as evidenced by some severely off-target throws to wide open receivers. The results have been quite surprising given that McSorley is generally viewed as a player with composure. At this point, retaining him on the final 53 would be considered a minor upset.

Do The Tighten Up

Throughout their history the Ravens have been known for competent-to-Pro Bowl caliber play from the tight end position. That shouldn’t change in 2020 given the talents of Mark Andrews and Nick Boyle. Andrews works really hard, every day, every snap. He sees the opportunity ahead and to his credit he’s doing all he can to get better every day. That’s cliché-ish for sure, but with the 2018 3rd-round pick, it’s reality. Barring injuries, the Ravens should be comfortable albeit thin at the position.

The notion of FB Patrick Ricard taking snaps as a TE and being the No. 3 on the depth chart is interesting. At 303 pounds Ricard is hardly going to be a vertical threat and given his height and wingspan he’s unlikely to be a target in the intermediate passing game when a quarterback relies on a tall target beyond the linebackers and in front of safeties. I’d be surprised if by Week 2 the Ravens don’t make a move for another tight end.

Why Week 2? Should the Ravens sign a vested, free agent tight end and said tight end doesn’t work out as expected, the Ravens can part ways with the player without being responsible for that player’s salary for the entire 2020 season. Those on the roster day 1 of the season, are due the agreed upon salary once cut. Those signed after Week 1 are only due their check for the weeks that they are part of the team’s roster.

If the Ravens do go the way of free agency for that third TE, the candidates most often brought up are Delanie Walker and Charles Clay. Both have played for Greg Roman – Walker in San Francisco and Clay in Buffalo. Walker just turned 36 years old while Clay is 31. Walker when healthy is a beast but he’s only played in eight games since 2017 due to injuries. Clay’s production has fallen off over the past two seasons but he’s only missed 8 games since 2015. 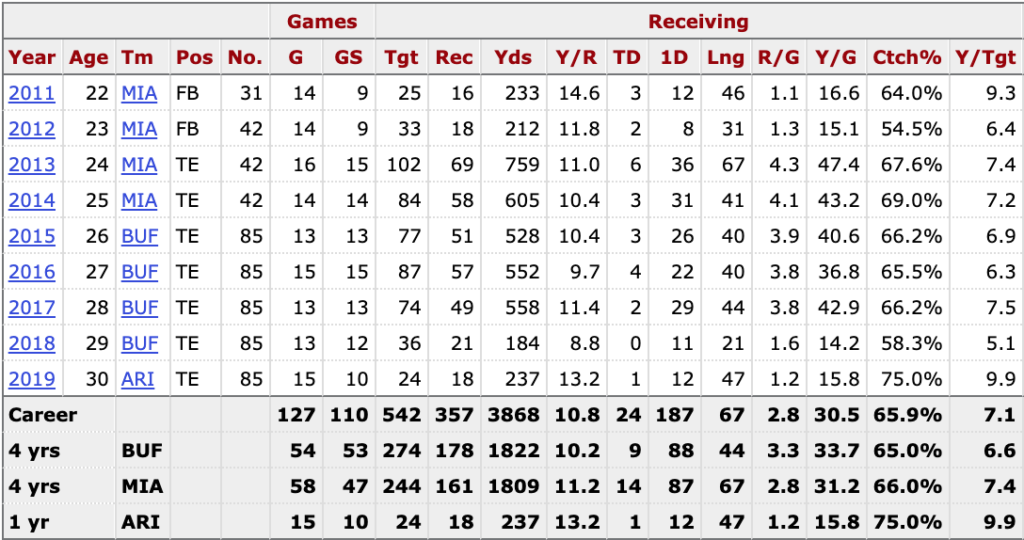 The candidates for the interior offensive line are vast and none have really stood out all that much. But then again, the task is challenging given the controlled contact of training camp. That said, Ben Powers has hardly lived up to his name. He’s just a guy in practice and I’ve seen him tossed around like a rag doll in one-on-one drills.

It will be interesting to see how the Ravens handle Powers moving forward. In years past the Ravens have shown patience with drafted offensive linemen. Ricky Wagner and Ryan Jensen come to mind. But as of late, they’ve shown less patience when quickly discarding Day 3 picks such as Greg Senat (6th), Nico Siragusa (4th), Jermaine Eluemunor (5th) and Alex Lewis (4th).

I’ve seen some angst from PSL owners on Twitter who have taken exception to the Ravens charging them $45 for cardboard cutouts in their likeness, to be displayed in the seats at M&T Bank Stadium. Many feel that the team should pony up the money and provide the cutouts as gifts for being PSL owners.

(SIDE NOTE: The team will not return the cutouts to you.) 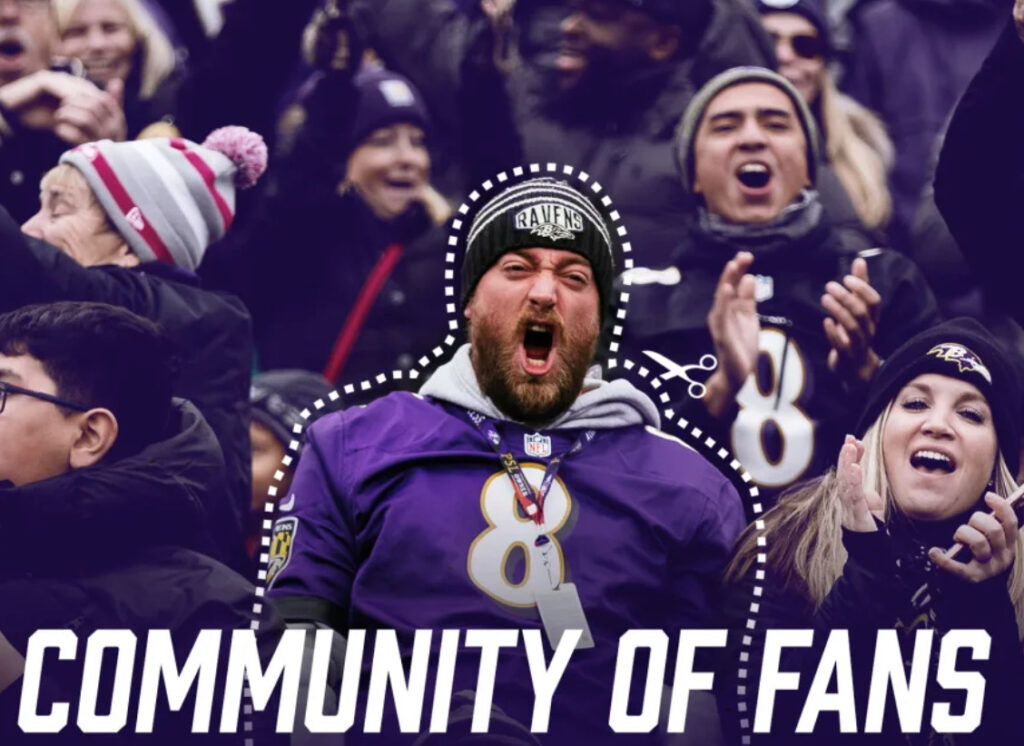 Let’s pump the brakes, shall we?

I looked around the league for other teams that are offering the same. I found out that the 49ers are providing such cutouts for $149 each.

Look if you’ve ever done anything like this at a printer, $45 sounds like the cost of a creative like a life-size cardboard cutout. Keep in mind, that they are NOT mass produced on a line since each is unique. Not only that, but the proceeds from the cutouts all go to the Ravens Foundation’s local COVID-19 relief efforts. Such efforts support organizations that include: Fund for Educational Excellence; United Way of Central Maryland; Baltimore Community Foundation and the Maryland Food Bank.

[Related Article: When The Crowd Roared…Virtually]

The salary cap has already been hit for 2021 due to a drop in 2020 revenues and the individual teams won’t see money from ticket sales, concessions, parking, game day swag purchases and in-stadium advertising. While many think that the league’s coffers are furnished with an unlimited supply of Benjamins, the league is not pandemic-proof.

If the $45 upsets you that much, there’s a simple solution.