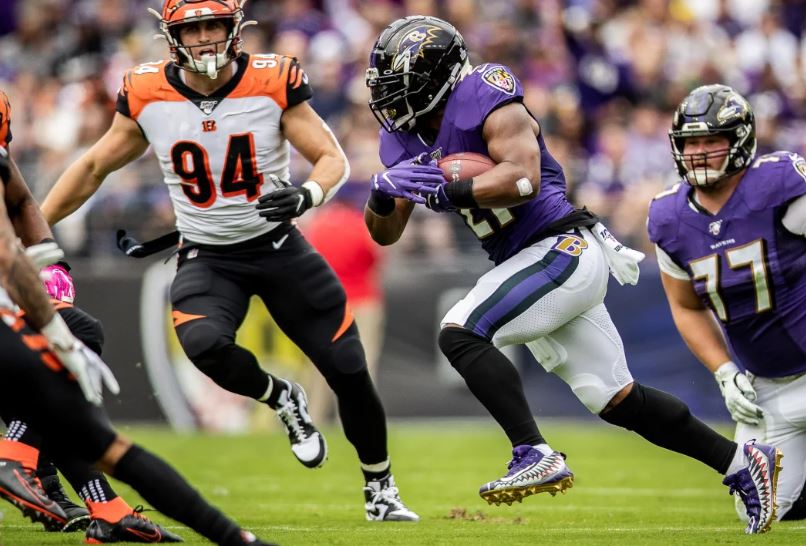 Week 1 is in the fantasy books, and I’m going to need all of your thoughts and prayers.

I have a league with RSR’s Derek Arnold and let’s not sugar coat it: DA did my team what the Ravens did to the Browns.

Alas, some waiver adds and players returning should help me, and now it’s my job to help you with your own fantasy lineups this week. We’ll start with the Ravens at Texans, where we could see quite a few fantasy impact players once again. As always, Lamar Jackson is the no-brainer starter so we won’t even mention him here.

David Johnson found his footing last week in his first game with the Texans, as he scampered for 77 yards and a touchdown, while adding 32 yards on four receptions (16 standard, 20 PPR). What’s key here is that DJ didn’t disappear from the stat sheet once the game reached blowout status in Q4. With Duke Johnson all but out in this game, I expect a steady diet of Johnson.

Admittedly, I slept on Marquise Brown last week. I genuinely expected Denzel Ward to be better (spoiler- he wasn’t) and that the Browns front would force quick throws. This week, I want redemption. Again, going back to the Texans Week 1 against the Chiefs, Tyreek Hill roped in five of six for 46 yards and a score (10 standard, 15 PPR). I think we’ll see more Holly targets than this – call it eight – and he’ll find paydirt twice.

Mark Ingram disappointed with just 29 yards on 10 carries. With J.K. Dobbins getting just three fewer carries than Ingram, and making the most of his touches, could we see a shift in carries already this season? I expect Dobbins to lead the backs in touches this week, and while Ingram will still get his, I don’t expect he’ll see the goal-to-go touches we’ve become so accustomed to.

I expected more from Brandin Cooks out of the gates, but with Will Fuller V getting a hefty target share, and TE Jordan Akins finding some love along with Randall Cobb, Cooks sort of falls into this no man’s land of irrelevance. I expect he’ll get better as the year goes on and he gets more acclimated with the offense (and healthier), but for now? Bury Cooks on the bench.

You may not consider him a sleeper at this juncture, and that’s fine; however, it’s just one week for the rookie, and really, he only had seven carries for 22 yards. His game was heavily touchdown dependent. With that said, and after seeing Clyde Edwards-Helaire slice and dice the Texans defense in the season opener? I’m all in on Dobbins this week. I expect… let’s call it 12 carries for 65 yards, five receptions for another 35 yards and a score.

Sure, Akins only had two receptions for 39 yards and a score last week, but I think Deshaun Watson will continue looking for a true 2nd option after Fuller. That’s going to be Akins. I expect an increase in targets, receptions and yards this week – not because the Ravens struggle against Tight Ends, but because the Texans have to throw to somebody, right??

Sleeping Around (the NFL)

You have a good feel of the ‘must starts’ versus the ‘bury on the bench’ guys, so let’s key in on some sleepers at each position around the NFL.

The Browns secondary is a train wreck. The Bengals wideouts are fire (on paper). Tonight should be fun for the rookie signal caller Joe Burrow.

Yes, Aaron Rodgers is good, but also, the Vikes secondary looked like garbage. The Colts will look to get Philip Rivers into a rhythm (something he struggled to accomplish in Week 1), and the timing couldn’t be better.

Double down! Again, I know Rivers isn’t Aaron Rodgers. The Colts will still be throwing a ton, and Parris Campbell will be the biggest recipient of those targets, just as he was in Week 1.

While everybody was gushing over Julio Jones and Calvin Ridley stacking up fantasy points, Russell Gage quietly had 12 targets of his own, with nine receptions and 114 yards to show for it. We all know Matt Ryan spreads the love. We also know the Falcons will be in a shootout here once again. Gage is ready to stack fantasy performances.

So here’s where I’m at: Latavius Murray already saw a decent workload in Week 1 with 15 carries. With Michael Thomas out, the Saints could go run-heavy against the Raiders, who gave up over a 120 yards on the ground, with a pair of rushing touchdowns.

James Conner is hurt, but I’m not sure a healthy Conner changes this much – Snell looked like the better back in Week 1, and I expect he’ll get the lion’s share moving forward. The matchup is tough, but a heavy load will boost his numbers.

This is strictly a numbers game; the Browns lost TE2 David Njoku to injury, and while WR Jarvis Landry is playing, he’ll be less than 100%. One and a half fewer bodies out there could help steer some more targets to Austin Hooper tonight.

Hunter Henry roped in five balls for 73 yards in Week 1 against the Bengals, and proved to be the most viable weapon on the Bolts offense. With the understanding that the Chargers will be playing catch-up most of this game, and throwing it around accordingly, Henry could provide solid fantasy value.