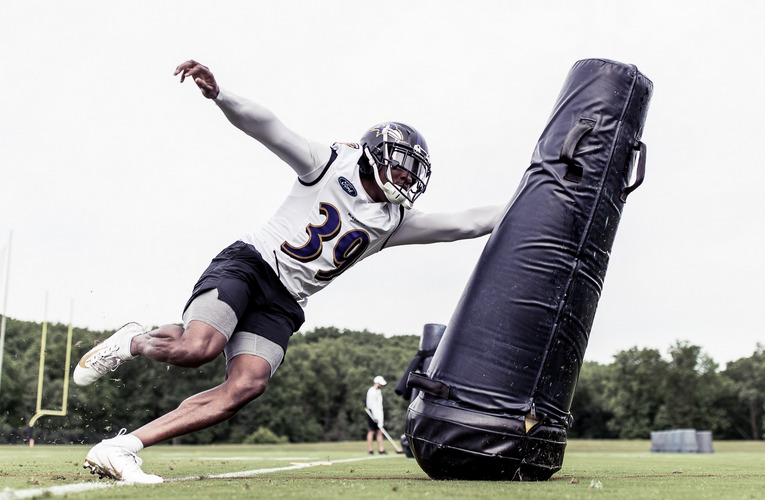 The Ravens need to move this guy to the active roster!

We have re-signed CB Terrell Bonds to the practice squad. pic.twitter.com/x0rOpCxP7F

Getting a W was the team’s ultimate goal, but there are clear areas for the Baltimore Ravens to clean up. One of those areas is in the secondary. All off-season fans and players alike kept gloating about how elite the unit is. Yesterday felt different.

The Ravens suffered a huge, heartbreaking injury to Tavon Young. His injury not only put him out for the game but the season. In the “next man up” mentality, Anthony Averett was challenged once again to step up and cover on the outside to keep Jimmy Smith at safety. Deshaun Watson smelled blood. AA had twitter blowing up like…

Kevin Ostreicher of Locked on Ravens thinks Averett just needs to grow up and grow up quickly. He also mentioned the team needing to bring in an option outside of the Ravens’ organization like Prince Amukamara.

For the record, I think he got targeted because the Texans were clearly scared of everyone else. He’ll catch on. I am definitely a fan. He’s fast and, if given time, will learn to shadow any WR in the game. He’s like Rajon Rondo when he first started in the NBA; it took a season or two to pull it all together. Give the man a break.

However, if y’all want him to catch all the smoke and run him out of town, there is one option in-house that I believe would certainly jump on the opportunity and make the most of it. Terrell Bonds is that dude. Can he make the transition from Young a seamless one?

Bonds is not a household name, and you’re probably scratching your head saying, who? But take a look at the practice squad roster, and you’ll see a guy that just stacks plays. Even Jeff Zrebiec of the Athletic sees the team making the move.

The Ravens then could use one of their two possible call ups for game day on one of their practice squad corners (either Khalil Dorsey or Terrell Bonds). That approach would make sure they keep Richards and get a fifth corner up for game days. https://t.co/VSgfzKcI8x

What I like about this player is the dog in him. Bonds came out in 2019 and made two interceptions in the same practice despite being the smallest player on the field at the time. Don’t let the size fool you. This 5’8” former Alliance Memphis AAF player can thump!

“Bonds played for the Memphis Express this year in the now-defunct Alliance of American Football League, where he had 14 tackles and five passes defensed in eight games. He was a playmaker in college at Tennessee State with ten interceptions during his four-year career.”

There’s not much tape on Bonds at all. I could go find tape on his time in 2014-17 when he was at Tennessee State, but I got kids y’all. I did, however, find stats thanks to BR.com:

I did open up the preseason vault of 2019 for some tape on this guy. The former Tennessee player had a few snaps against the Green Bay Packers. At Nickel, Bonds showed versatility in his play. He lined up both in press and off coverage. The former Express player even performed a delayed blitz that resulted in a sack by teammates. He had a presence in that game that made the QBs look away from his assigned WR.

I did catch him peeking into the backfield and slow to flip those hips on a play or two. If Bonds gets his number called on Monday against the Kansas City Chiefs, he may draw coverage on Mecole Hardman. With 4.53-40 speed, there is little room for mistakes against 17. I was at the game live when the Ravens made this same mistake Week 3 last season.

Other than that, I hope he does get at least activated for Sunday. I’ll be honest with you: with only a week to prepare for the SB Champs, I would still like AA to get another chance to cover one of the fastest in the game with his 4.36 speed.

One of these two D-backs will be key to the Ravens victory Monday night. My money is on Averett, but I’ll gladly lose that dough to see Terrell Bonds make a few big plays.