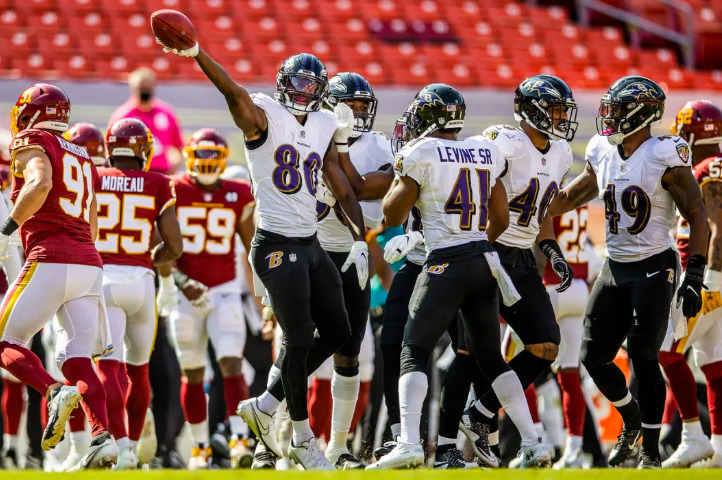 Here are the game-changing plays from the Ravens’ 31-17 win in Washington in Week 4.

The Ravens rush four: Tyus Bowser LOLB, Brandon Williams DT-L, Justin Ellis RE, Pernell McPhee REO. Dwayne Haskins gets a clean pocket and he throws a screen to RB #41 J.D. McKissic (who motioned from left to right) near the right sideline. Marlon Humphrey jumps on top of McKissic and strips the ball out for the forced fumble. Marcus Peters scoops it up for the fumble recovery. The play gives the Ravens a short field and a big time opportunity to score.

Lamar Jackson runs the play action movement to Ingram (defense flows to offensive left), Jackson rolls out to his right, extends the play and throws a deep in-route to Brown. Hollywood fakes an out/comeback and darts inside for an opening in coverage. Andrews makes a solid block to spring Brown for a few additional YAC yards. This play went for 33 yards and set up the easy one-yard touchdown for Ingram.

Lamar and Hollywood capitalized on the defensive turnover, putting the Ravens in the lead.

Key blocks by the entire O-line, with especially nice blocks by D.J. Fluker (down/ crashing block), Bradley Bozeman (pulling block to R second level), and Andrews. Lamar makes #52 Ryan Anderson (unblocked) miss, then he bursts upfield through a gaping hole. The rest is just good blocking and blazing speed to get into the end zone. Jackson scores his longest career rushing touchdown and gives the Ravens a commanding 14-0 lead.

The upfield rush of McPhee and Bowser allow this screen to work. The defense is attacking because they anticipate a pass beyond the sticks, but the aggressive rush allows the pulling O-linemen of WFT to get hands on guys in space. Clark respects Gibson’s speed and falls for the vertical release, which gives the SLWR room to make the block. Clark may have been holding contain on the sideline, but ultimately he gets blocked out of the play. Anthony Averett whiffs on the tackle attempt and Gibson has enough room to run for the first down. The 40-yard screen catch and run set up the Washington goal line touchdown a few plays later.

Chris Horton has the special teams unit firing on all cylinders through the first quarter of the season. The Ravens set up to punt, but they lined up Miles Boykin at right gunner (a spot that Chris Moore usually holds). Morgan Cox snaps the ball, Sam Koch fakes a punt momentarily, and then he throws a timing curl route to Boykin. Koch becomes an elite 7-for-7 with his completion and conversion to Boykin for the drive-extending pass. Special teams matters, and it has paid off so far in 2020.

Pressure closes in, from all sides of the pocket, especially the right side of the line, which forces the escape and dime from Lamar. Andrews runs a post/dig route that turns into an extended play. Jackson threads the needle on the left sideline of the end zone for the beautiful touchdown. Good things happen when Lamar and Mark Andrews are on the same page. It is worth noting that Hollywood wins his route on the play, but because of the pressure, and late separation from Mark, the better target is Andrews. Thankfully Lamar sees the field quite well for being such a young quarterback.

Andrews runs a beautiful 9-route that fakes outside, but stays on the numbers. Lamar hits Andrews in stride at the Washington four-yard line, and Andrews jogs in untouched. The offensive line gives Jackson a clean pocket and Edwards blocks the stunting D-lineman #94 on the right side of the line. Easy execution for Baltimore extends the lead once more.

Ferguson bull-rushes well, forces the LT backwards, then pursues Haskins for the sack. The timing of the sack makes it seem like a coverage sack, but Haskins had a couple players open. Humphrey has lurking zone coverage on the shallow crossing route to #83 Wright, and DeShon Elliott has deep coverage on #17 Terry McLaurin. Haskins has Gibson open for most of the play for an outside screen pass. Regardless of the reasons, it is nice to see Ferguson finish the pressure with a sack.

Tyre Phillips gets beat by #94 Payne, allowing a pressure and QB hit. The pressure forces RGIII to throw the ball a little bit early, and it stops him from stepping one hundred percent into the throw. Brown runs a deep curl on the left sideline, RGIII heaves the deep ball with pressure in his face, and the pass sails through Brown’s extended hands for Kendall Fuller’s interception. People will want to point fingers at RGIII for the late interception, and while he has blame, other players were contributors on the poor play. Brown beat his man deep, but he had to come back for the ball. Perhaps Brown mis-timed his jump or came back too much on the play. Phillips has a more obvious blame because he flat-out lost his pass blocking rep and allowed the pressure. This play leads to a closer box score, but it should not cloud the outlook of the team.

Washington’s offensive line picks up the rush well. Practice squad CB Dorsey covers Washington’s best receiver, McLaurin, on the seam 9-route, and Haskins delivers a dime. Backups in the game for Baltimore leads to a garbage time score. Great play by Haskins and McLaurin, but it is not a reason to panic.

Baltimore won the game against Washington handedly, but came away with more areas needing improvement. It’s on to Cincinnati.