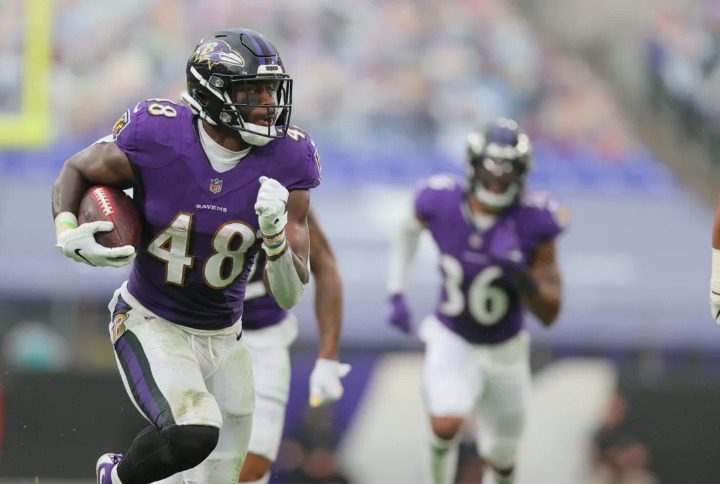 I very rarely take shots at the opposing team in this article, but I want to be very clear about one thing here… kicking a FG when you’re down 27-0 just to avoid being shutout is beyond pathetic.

Like three points on a garbage time drive is going to make it feel like any less of a butt kicking.

Ok, that’s off my chest…bad form, Zac Taylor. Moving along…

Going into this game, the offense was leaving plays on the field and didn’t have the same ability to move the ball that they showed in 2019. I really thought this would be a ‘get right’ game for the offense where they could pound the rock and get back to that identity that made them so good a season ago.

Well, it didn’t quite work out that way. There were too many plays left on the field once again and the play calling leaves a ton to be desired. We’ll dig into the execution just below, but save the play calling discussion for the coaching section.

Last week I talked about Lamar Jackson building confidence by making plays on the ground. My theory was broken this week, as Lamar came out of the gate throwing the ball quite effectively without making any plays on the ground. However, he took a big step back after connecting with Mark Andrews on a TD.

Lamar left a number of plays on the field and seems to be falling into a similar trap that he did last year, where he passes on an easy completion to attempt a deeper, more difficult pass. Leading up to the Ravens’ 1st FG, Devin Duvernay was running a crossing route and was open, but – as pointed out by Rich Gannon on the broadcast – Lamar opted to throw a deeper crosser to Andrews who had much tighter coverage. The result? Incomplete and a 4th down.

There still seems to be a distrust between Lamar and the offensive line as well, which the Bengals took advantage of with a number of blitzes that forced some mistakes. It’s very possible that Lamar could have had three INT if the Bengals defenders could catch the ball. Lots of work to do for the reigning MVP, but what’s the positive? We know no one in this league is going to work harder than Lamar. I’m confident in a bounce back, just like he did last year after a rough patch in Weeks 4 and 5.

It’s hard to be too critical on this group. The RBs as a group are playing well, but aren’t getting many favors from either the run blocking or the play calling, neither of which give them many opportunities.

On a drive late in the game, they finally stuck to the run and Mark Ingram was able to break off some longer runs. J.K. Dobbins had a nice scamper where he broke tackles and displayed some nice balance to stay in bounds, but overall these guys need more opportunities to get into a rhythm as a unit.

Mark Andrews continues to take leaps forward as a player. There are points where he completely takes the game over and it seems there’s not much the defense can do. Well, that came today and resulted in an Andrews TD where he basically just boxed out the DB for the easy six. He’s solidifiying himself as the 3rd best TE in this league and is putting Zach Ertz and Darren Waller in his rear view mirror.

Marquise Brown was also able to make some explosive plays and caught his first TD of the year.

The real issue with this group continues to be lackluster production from Miles Boykin. It seems all too often we’re seeing that Boykin and Lamar aren’t on the same page. The blame game is tough and not all that helpful. The important thing is that these two need to find some chemistry or Boykin is going to start to see fewer snaps.

Who’s going to take them? Look no further than Devin Duvernay. He continues to make plays when he gets the ball in his hands, in both the passing and running games.

The Ravens took an interesting approach filling the RG spot with Tyre Phillips inactive, as they rotated Ben Powers and Patrick Mekari throughout the game.

The #Ravens just gave Powers a series at RG.

We rarely see this, but I'm a huge fan of it.

When you have guys that you need regular season film on, this is a great time to do it.

Didn't look closely at RG on that drive, but it's going to make a fun film breakdown.

This isn’t an approach you see very often, but as someone who loves to break down film and see multiple guys I absolutely love it.

The pass protection felt much better this week. The Bengals were able to generate some pressure, but it typically came off of six-man pass rushes when the Ravens had five-man protection. There were some miscues and some poor reps from Ronnie Stanley and Orlando Brown Jr., but overall it was better.

The run blocking continues to be a problem. An in-depth film study is required to find the ‘why’, but the important thing is that it’s just not that good and when the Ravens try and run between the tackles they’re having a really difficult time. The team gained 161 yards on the ground, but 42 came off of Duverney’s end-around. It’s just not good enough.

I gave the defense a pretty hard time last week after they let the Washington Football Team move the ball with ease. However, they shut my mouth real quick this week with a dominant performance against Joe Burrow & Co.

In fact, I think Burrow is going to file a restraining order against the Ravens D, who got to him early and often with seven sacks, one FF and one INT.

The defensive line group played outstanding against an underwhelming Bengals offensive line. Remember how I mentioned a ‘get right’ game for the offense? Well, as much as it didn’t happen for that group, it sure did for the DL!

They may not have been the ones getting the sacks, but they controlled their rush lanes and pushed Burrow into favorable positions for the DB and LB groups to get hits and sacks on him.

They also stifled Joe Mixon who was coming off a monster game. He was only able to find 59 yards on 24 carries.

The DL group weren’t the only ones who bounced back, as the linebackers did the same. Matt Judon and Tyus Bowser set the edge extremely well and even Jaylon Ferguson set the edge, shed a blocker and made a tackle.

Patrick Queen led the team in tackles, while also adding a sack, a FF, two fumble recoveries, one of which he forced himself and the other he returned for a TD after Marlon Humphrey forced it.

Queen had himself a DAY and is poised for some big steps forward after some early season struggles.

Is there a CB in NFL history that can force fumbles like Marlon Humphrey?

This technique is absolutely insane. Mans the damn Mike Tyson of punching balls out from WRs hands.#RavensFlock #Ravens

Marlon Humphrey is working himself into the DPOY conversation. We know he’s a shutdown corner, and we know he’s going to move around and face difficult assignments. However, the element that is putting him in that conversation is the takeaways. He forced another fumble with his signature punch-out and is now right up there with Charles Tillman as the best CB as far as forcing fumbles. It’s something to see.

Tillman had a year with 10, which is absolutely mental!#Ravens #RavensFlock

Marcus Peters was able to get a pick after a few rough games. The other DBs got in on the sack action, as the Ravens set a record for the first team in PFREF’s database to have five DBs register a sack.

The @Ravens are the first team in our database to have 5 DBs register a sack.

The previous record was four by Green Bay in the 2004 NFC Divisional Round https://t.co/WLzJsTLY7o https://t.co/VLRnTIo284

Not much to report here. Justin Tucker wasn’t able to connect on a 61-yarder to end the first half, which I guess was disappointing, but not really.

Duvernay and James Proche had good returns and the coverage units did well against a team that has broke off some big returns against them in the past.

The great irony here is that Greg Roman has always been criticized for running too much.

Now he refuses to run the ball consistently, even after they ran it well on the last drive.

I just do not understand.#Ravens#RavensFlock

I wish I had an answer to the offensive play calling. I do not. It doesn’t make sense to me. My best guest is that Roman doesn’t trust the offensive line to effectively run block. However, I think it’s a stretch to say they’ve been that bad.

Even when the Ravens were up 17-0 he wouldn’t commit to the ground game. It’s a tough one to figure out. Hopefully an improved performance at RG develops trust across the whole team, including the coaching staff. They need to run the ball to get the offense going.

While Roman may have gotten an F, Wink Martindale got an A. That defensive game plan was masterful. He gave Joe Burrow every look in the books and it got to him.

Why an F? Oh I don’t know…it could have been the team of Greg Gumbel and Rich Gannon calling Lamar Jackson “Kyler Murray” or it could have been the insanely poor analysis of plays. On one play they said pressure came up the middle at Jackson, and circled Ben Powers which of course makes you think Powers allowed pressure. Well, not only was there no pressure on the play, but Powers made his block with ease.

It was just awful all game and I’m floored that group gets paid to do this for a living.

Come on down Patrick Queen! That was some great production and just the type you want to see from your first-round pick. There’s some things to improve upon as there is in any rookie’s game, but having a knack for big plays is what we want. Queen will be in the mix for Defensive Player of the Week and if he can continue to make plays like that he’ll be in the Defensive Rookie of the Year conversation in no time.