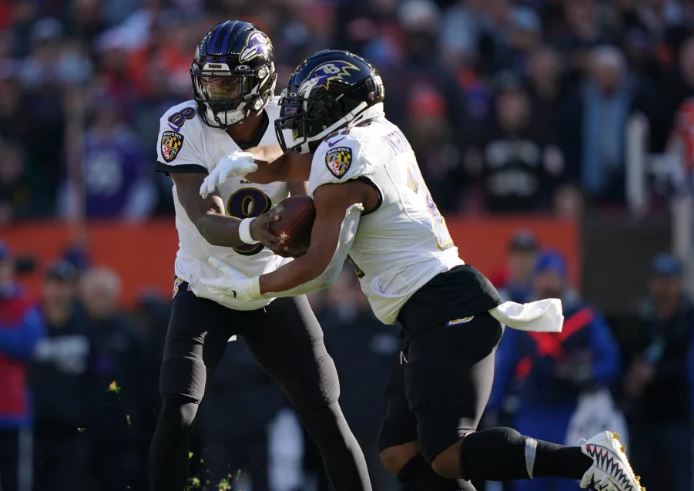 Admittedly, this blog was originally supposed to be an effort to point out how the 2020 Baltimore Ravens have become the Ravens of [insert any year]: defense reigns, while the offense is best suited to run the ball, or get it to the tight end (while being frustrated with the pass game in general, and more specifically, the lack of viable wideouts).

While that narrative is a fun one to explore, the more I dove into stats, the more interesting I found some of these numbers. So what was once a lighthearted ‘isn’t it ironic?’ blog has now become a nerdy numbers blog.

Let’s start with the Ravens defense because I like happy things too.

Defensively, the Ravens have allowed 17 or fewer points in four of their five games, and their 76 total points allowed is the fewest in the NFL in 2020. While that’s great, think about it from this angle: despite allowing Patrick Mahomes to drop 34 points on them in Week 3, the Ravens still have allowed the fewest points of any team in the NFL.

In comparison to previous iterations of the Baltimore Ravens, the 76 points allowed through five games is the fewest since 2011 when the Ravens allowed just 71 points over their first five games before going on to a 12-4 record, an AFC North title, and of course a nightmarish Lee Evans and Billy Cundiff fiasco…

What’s more is that this season marks only the 4th time under John Harbaugh that the Ravens have allowed under 80 points through the first five games: 77 PA in 2018, 71 PA in 2011, and 72 PA in 2010. The latter two defenses were utterly insane units featuring the likes of Ray Lewis, Ed Reed, Haloti Ngata, and Terrell Suggs. Not bad company…

A few other noteworthy stats on this defense to date:

You can point to opponents, surely, but let’s take this into consideration: the Ravens held the Browns (6), Texans (16), and Bengals (3) to their lowest points scored on the season to date, while also being the catalyst for Dwayne Haskins losing his starting gig with the WFT.

Specifically looking at the Ravens’ latest victim in the Bengals, Joe Burrow & Company had just come off a 33-point performance where the amassed 505 total yards of offense, and hadn’t scored under 23 points in a game since their Week 1 16-13 loss to the Chargers. Against the Ravens on Sunday, Cincinnati was held to 205 total yards and a chip shot field goal in the final minutes.

This defense is GOOD.

Offensively, we’ve seen some… well, we’ve seen some things we don’t necessarily love, and we’ll get into those facets of the team, but let’s start with the big picture. Overall, the team is putting up points consistently, to the tune of a +73 (149 points scored, 76 points allowed) through five games, or 14.6 PPG Margin of Victory (MOV), which leads the NFL. The next closest MOV is Green Bay (+12.6), followed by the LA Rams (+9.2), and Kansas City tied with Pittsburgh (+7.8).

Now let’s go dark and talk about the passing game.

A healthy Mark Andrews and Hollywood Brown are fantastic weapons to have, but beyond that, there’s simply nothing there to provide a threat to opposing defenses. To put it into perspective, here’s the target share through 5 games:

In essence, Brown and Andrews account for nearly half of all Ravens targets through five games. What’s more alarming is that the rest of the group from Boykin on down have a 69.5% reception rate, while Hollywood and Andrews combine for a 61.6% catch rate… with five (!) drops, per PFF.

If your top two targets are going to be that heavy of focus, the production simply needs to be better, but ultimately what we had hoped for early this season was a wider spread of the ball. Instead, the Hollywood/Mandrews combo that drew a 36% target share in 2019 are now drawing 48.5% target share in 2020, which is kind of the opposite of spreading the love. Here’s the delta in targets from 2019 to 2020:

Now check this out: Tight Ends in 2019 (Andrews, Boyle, Hurst) accounted for 42.5% of all targets. The Ravens trade away Hayden Hurst, decrease Boyle’s target share, keep Andrews steady, and suddenly the position accounts for just 27.6% of all targets. That’s a drop off of roughly 15%. So let’s look at the shares by position in terms of delta from 2019 to 2020:

I’d say it’s pretty obvious that the Tight End focus shifted to the Wideouts, with the vast majority of that coming in the name of Hollywood Brown, while the backfield targets remain relatively unchanged.

The ground game of Baltimore is currently operating at a 5.6 ypc clip, compared to the 5.5 ypc from last season, as an overall number. But let’s take that a step further and isolate just the running back corps, since we can clearly see the intent is for Lamar Jackson to run less in 2020 (more on that momentarily).

Let’s go back to Jackson’s reduction in carries: the 2019 MVP has gone from 11.7 carries per game in 2019 to just five carries per game through five games in 2020. For a player that averaged over 6.9 yards per rush last season, the lost ground yards certainly have an effect on the offense, especially when you consider Lamar is averaging 20 fewer passing yards per game this season as well (209 pass ypg in 2019 versus 189 pass ypg in 2020).

To clarify, despite a clear decision to run Jackson less… despite a vastly improved backfield with the addition of J.K. Dobbins… despite running at a higher clip than 2019… the Ravens have opted to run the ball less in the 2020 season by a substantial margin.

One more stat here to really tie it all together: Time of Possession

With a more aerial approach to the offense, the Ravens have also managed to lose their TOP crown, coming in at 29:07 TOP, good for 21st in the NFL. That’s a five-and-a-half-minute swing, and fairly drastic in terms of what this team became accustomed to in 2019. To put it into context, during the 2019 regular season, the Ravens had less than 30 minutes TOP in just two games (Seattle- 29:54 & Cleveland- 29:43) with neither touching their 2020 average. Comparatively, the Ravens have failed to hit the thirty-minute mark in four out of five games so far this season (Cleveland- 29:58, Kansas City- 26:04, Washington- 29:22, Cincinnati- 25:21).

Ultimately, what we’re seeing here in 2020 is a Ravens team that’s going to be defense-oriented, with limited weapons in the passing game that’ll be heavily reliant on the Tight End position, with their true strength in the ground game.

I somehow managed to bring it full circle. Imagine that…