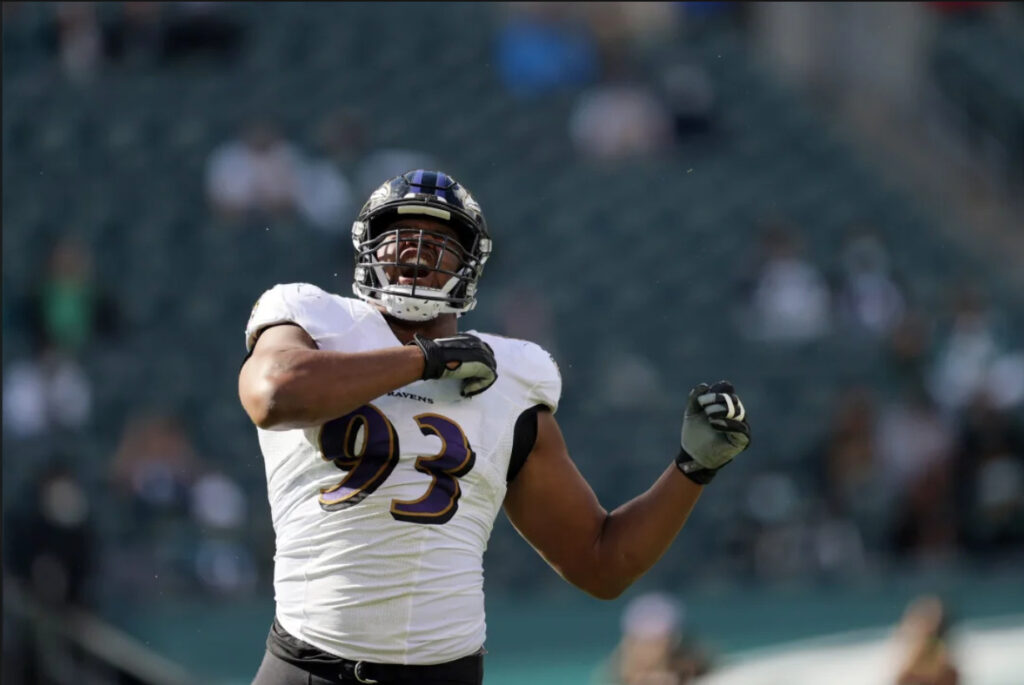 Sunday was a tale of two halves, as the Ravens continue to show inconsistency on both sides of the ball.

There’s a difference between inconsistent and bad. The Ravens offense or defense aren’t bad, they are just consistently inconsistent.

Here’s where some players’ stock sits heading into a much needed bye week at 5-1.

Calais Campbell had his best game as a Raven on Sunday, and it couldn’t have come at a better time. With Brandon Williams and Derek Wolfe both sidelined, the defense was relying on Campbell to be the main source of pressure, and he delivered.

Right off the bat, Campbell brought down Carson Wentz on the Ravens very first defensive play and added two more sacks, a QB hit, and three tackles for loss throughout the remainder of the game.

The Eagles’ offensive line has dealt with injuries all season long and finished Sunday with only one member of the starting offensive line, center Jason Kelce, healthy. We knew coming into the game that Don Martindale’s defense would do what it does best and bring the pressure to Wentz, and Campbell played so well I forgot Williams and Wolfe weren’t there next to him.

DeShon Elliott was close, but he’ll have to wait at least another week for his first career interception.

The third-year safety was all over the field and the stat sheet on Sunday with three tackles, what should have been an interception, and two forced fumbles.

“Last night, I watched like an hour and a half of Marlon Humphrey tape from the last two years to see how he gets the ball out,” Elliott said after the game.

I say stock up only because of how bad last week was for Lamar Jackson. This wasn’t a great game, but you can’t get any worse than his performance against Cincinnati. Some may disagree with me, but I was happy with some aspects of Jackson’s performance Sunday.

I loved his touchdown to Nick Boyle, he made more great throws to Willie Snead and Marquise Brown in particular, and Devin Duvernay was involved Sunday more than any game this season. This felt like a vintage Jackson game, too. With very little help from his running backs, Jackson led the team on the ground with a team high 108 yards rushing, topped off by a 37-yard touchdown run.

"@Lj_era8 is electrifying when he gets in the open field!"

Touchdown ❗️❗️ Tune into the second half on CBS! pic.twitter.com/Vp2d0rXryk

But it wasn’t all sunshine and rainbows. It appears he’s still experimenting with throwing out of different arm angles, probably as a result of having multiple balls batted down at the line of scrimmage. He also took a bad sack on the first drive of the second half that took the offense out of field goal range; it was a rookie mistake from a guy who has rarely – if ever – done that sort of thing.

There are clearly things that Jackson needs to fix over the bye week, mostly mechanical and mental, but another reason he’s in the “stock up” is to give people confidence that he’ll do just that.

After coming back from a shoulder injury that kept him off the field last week, Tyre Phillips again struggled to get going and was ultimately benched.

He looked completely overmatched by Philadelphia’s strong defensive front, struggled as a pulling guard, and the inside running game never got going.

Philips won the right guard job in camp over D.J. Fluker, Patrick Mekari, and Ben Powers, but now his future at the position is up in the air. Many speculated if he would still be the starter after the bye week, and it looks like the plug may have been pulled on the Philips experiment.

Miles Boykin’s relationship and connection with Jackson is getting worse by the week. After only one catch for 11 yards Sunday, Boykin now has just four catches for 37 yards in the last four games.

It’s obvious the trust is not there between the receiver and quarterback. One way the team has tried to resolve this is getting Boykin involved early in the scripted play portion of the game. They did that on Sunday, but he was rarely even looked at throughout the course of the game after that first catch.

Duvernay is becoming more involved every week, Snead is always reliable, Brown and Mark Andrews are the clear number one and two options, and even Boyle and the running backs are out-targeting Boykin.

Maybe a future move to tight end would be beneficial for the second-year receiver, similar to what former Raven and now-flourishing Raider Darren Waller once did.

If the Ravens faced a better opponent, the amount of penalties committed would have been game-changing, and they almost were on Sunday.

Twelve penalties, including two roughing the passers, a costly pass interference and holdings from five of the six offensive linemen to see snaps cost the Ravens 132 yards. Penalties like those will come and go, but the mental errors of false starts and illegal formations are especially concerning, and it’s something John Harbaugh will surely concentrate on over the bye.